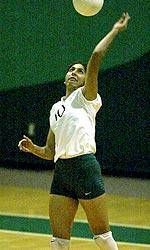 CORAL GABLES, Fla (hurricanesports.com) – The University of Miami volleyball team downed Kent State, 3-0, and Indiana, 3-1, at the Hurricane Invitational on Saturday at the Knight Sports Complex.

The Hurricanes (3-0) defeated Kent State in just three games in UM’s first match of the day. Miami took KSU 30-21 in the first game and upped the Golden Flashes in the second match 30-21. The Hurricanes clinched the victory in the third game overtaking KSU 30-12.

Junior outside hitter Valeria Tipiana led the Hurricanes with 18 kills and posted a .607 hitting percentage. Sophomore setter Margie Young contributed with 25 assists in the win and junior libero Jamie Grass pulled in 17 digs for the Hurricanes.

The Hurricanes returned in the evening slate to face Indiana (2-1). Miami downed the Hoosiers in the first game 30-19 before loosing the second game to IU 30-26. The Hurricanes rallied to overtake Indiana in the third game 30-23 to take a 2-1 advantage going into the fourth game. In the fourth game the Hurricanes overpowered IU to take the game and the match 30-20.

Tipiana once again pulled in an impressive performance for Miami with 17 kills. Senior outside hitter Leyre Santaella Sante stepped up in the victory with 16 kills sophomore setter Margie Young collected 35 assists in the Miami win.

Head Coach Nicole Lantagne Welch was impressed with the Hurricane’s performance in the opening weekend.

“I was very proud about the way our team performed.” Coach Lantagne Welch said. “I feel that we got better each match and we really had a lot of different people contribute to this success this weekend.”

Coach Lantagne Welch was also pleased with the play of a number of players.

“I was especially impressed with Jamie Grass,” Coach Lantagne Welch claimed. “I thought that she was outstanding and really fought for every point. Jamie really brought her “A” game this weekend. Margie Young did an excellent job for us as well. She came in and her setting was outstanding. We got more offense out of our middles than we have in the past. That is something we have been working on and it really showed this weekend. Elizabeth (Tyson) and Leyre (Santaella Sante) were great from the outside and Valeria (Tipiana) was just amazing at times. It was a complete team effort.”

The undefeated Hurricanes improved their overall record to 8-1 at the Hurricane Invitational dating back to the inaugural event in 2001.

UM will travel to Tucson, Ariz. on Thursday, Sept. 4 to play in the Wildcat Invitational hosted by the University of Arizona. The Hurricanes first match is scheduled for 12:30 p.m. against Rhode Island.