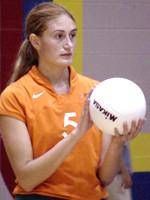 Gamarra honored as BIG EAST Player of the Week

CORAL GABLES, Fla. (www.hurricanesports.com) – – University of Miami volleyball player Marcela Gamarra (Medellin, Colombia) was selected for BIG EAST Player of the Week honors following a breakout week in which she led the Hurricanes to three wins over Florida Atlantic as well as BIG EAST Conference teams St. John’s and UConn.

During the stretch, the Hurricanes refused to yield so much as a game.

Gamarra led the Hurricanes in the kills category in two of the victories and tied with the other team leaders in one.

In a pivotal BIG EAST win over UConn, Ganmarra led with a match high .387 hitting percentage, a match high 15 kills, and also a match high 11 digs. UConn has traditionally been among the stronger programs in the BIG EAST.

According to Hurricane coach Nicole Lantagne Welch, Gamarra was also a very consistent passer against the Huskies.