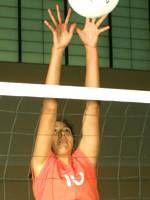 Coach Nicole Lantagne Welch said that she knew the Pirates were among the more dangerous teams in conference entering Sunday’s match and that she was pleased with the way her team responded.

“They have some very dangerous hitters,” Lantagne Welch noted. The coach cited senior outside hitter Marcela Gamarra (Medellin, Colombia/Miami-Dade CC) for her steady and consistent contributions throughout the match. Gamarra led the Hurricanes with a match high 16 kills and generated a .368 hitting percentage.

Freshman middle blocker Karla Johnson (Houston, Texas/Westfield HS) continued to be a force for the Hurricanes, chipping in with 12 kills and six total blocks.

For more information on University of Miami athletics log on to its websitewww.hurricanesports.com, the official site for all Hurricane news, tickets and apparel. For Hurricane ticket information call 1-800-GO CANES.