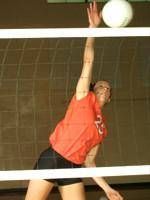 UM volleyball triumphant over BC

With the hard-fought 3-1 win, the Hurricanes improved their win streak (the longest in the nation) to 24 consecutive matches dating back to Oct. 5, 2001.

Coach Nicole Lantagne Welch said that she was very pleased with her team’s performance and its ability to face the rigors of road play, an unfamiliar element for the second-year program.

The first two matches went into extra points, with the Hurricanes taking the first 37-35 and BC the second 31-29.

“The match started out very close, they came ready to play and we were a little bit down in the first two games,” Lantagne Welch said.

Miami overwhelmed the hosts in the third game 30-21 and in the fourth lowered the boom for a 30-14 decision.

The key for the Hurricanes, according to Lantagne Welch, was their superb blocking. “This was by far our best blocking match of the season,” the second-year coach said.

Freshman middle blocker Robin Lewullis (Allentown, Penn./Allentown Central Catholic HS) had a career-high combined 11 blocks (two solo, nine assists). “This was her best blocking match so far,” Lantagne Welch said. The 11-block performance was the best by a Hurricane in the two years since the program’s restoration in 2001.

Senior outside hitter Marcela Gamarra (Medellin, Colombia/Miami-Dade CC) led the offense with a match-high 23 kills. Her hitting percentage also topped all competitors at .346 and she was third among Hurricane players with 17 digs.

“Marcela was really steady for us throughout the match, her play was tremendous,” Lantagne Welch said.

Sophomore outside hitter Biz Tyson (Jacksonville, Fla./Bishop Kenny HS) was second in kills for Miami with 16.

James recently returned to the court following an injury. “(James) had a nice match and she played better as the match went on,” Lantagne Welch said, adding that it was good to see her making strides toward returning to form.

Sophomore outside hitter Katie Andersen led the Eagles with 18 kills and 21 digs.

Sunday, Miami will face Providence on the Friars’ home court at 2 p.m. After conference road contests against Villanova (October 5) and Georgetown (October 6), the Hurricanes will return to their home court in the Knight Sports Complex for a 7 p.m. match against Rutgers.