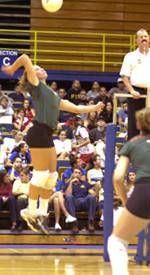 Since the program’s restoration last season, Miami has gone 10-4 against in-state opponents. This season, the Hurricanes are 3-0 over Florida foes with a hard-fought 3-2 upset over Florida State and a pair of 3-0 defeats over cross-town rival Florida International and FAU.

The Hatters are coming off a 1-2 performance at the Falcon Invitational in Colorado Springs, Colo. Stetson opened the tournament with two losses, falling in three-straight games to Air Force and Hofstra. The Hatters finished strong, though, outlasting San Francisco in five games.

Prior to the FAU match on Friday, the Hurricanes began the season with three consecutive tournament championships at Wichita State (8/30-31), own Hurricane Invitational (9/6-7) and at FIU (9/13-14).

This season the Hurricanes have claimed wins over Georgia, Wichita State, Oregon, FIU and Florida State. The victory over the Lady Seminoles was arguably the top win in the programs’ brief history, followed by the following win over FIU for the FIU Fall Classic title. Last season, both FSU and FIU claimed victories over the fledgling squad, with the loss to FIU being UM’s last recorded defeat on Oct. 5, 2001.

Miami, in its second season, begins its inaugural run in the BIG EAST Conference this weekend with road matches at Boston College and Providence on Saturday and Sunday, respectively.

The Stetson match will be broadcasted live on the University of Miami’s student radio station, WVUM 90.5 FM and can also be accessed on the Internet at www.hurricanesports.com.