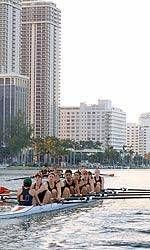 Syracuse’s varsity eight has won three races this year en route to a No.12 national ranking in the US Rowing/Collegiate Rowing Coaches Association Top 20. At a home tri-meet on Onondaga Lake, the Orangewomen earned a victory defeating Boston University and Clemson. On March 15, SU defeated Miami and Central Florida.

Notre Dame’s rowing team is experiencing its best season in history and is currently ranked ninth in the nation. After a successful fall campaign in which the Irish won two races, ND took four of five races from Tennessee, including a 19-second victory by the varsity eight.

Rutgers finished in third place in all of its races against Wisconsin and Northeastern to open its season. On April 6, the women raced against Princeton and Columbia, finishing third.

Boston College is in its second season as a varsity program and will look to challenge for the varsity eight title. The Eagles’ varsity eight crew has picked up a pair of victories this season at the Knecht Cup, a two-day affair with 57 schools participating.

Miami heads into the 2002 BIG EAST Rowing Challenge fresh off a third-place finish at the Southern Intercollegiate Rowing Association Championship. The varsity eight has rowed strong this season, improving its times in nearly every competition.

The Villanova novice eight team hopes that a third-place finish at the Knecht Cup and Occoquan Springs will lead to success at the BIG EAST Rowing Challenge.

West Virginia, a second-year program, will look to take home the varsity eight crown. The Mountaineers nabbed their first win of the season defeating Barry in Miami, Fla. on March 30.