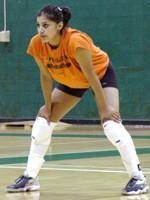 The Hurricanes (13-7 overall, 10-1 at home) took down a Georgia State squad thatis sitting atop the Atlantic Sun conference standings. The Panthers fall to 20-7with the defeat.

GSU appeared in control early in the first game jumping out to an eight pointlead at 5-13. But Miami adjusted and went on a 13-5 run to lock the game at 18-18.UM pulled away late and a key block assist from junior Marcela Gamarra (Medellin,Colombia) and senior Kristi Sprinkel (Laguna Beach, Calif.) sealed the victory,30-25.

“It doesn’t matter if the other team starts off on fire,” said head coach NicoleLantagne. “We’re responding and making adjustments.”

Freshman setter Jamie Grass (Manhattan Beach, Calif.) ignited the Hurricanes fromthe start of the second game with five-straight service points and Miami was up5-0 before the Panthers served. The Hurricanes would never trail in game two,winning 30-24.

Miami cruised in the final game and won by 17 points at 30-13 — its largest marginof victory this season. A deft kill by Gamarra put the finishing touch on Miami’sseventh-straight win with the crowd erupting for the match point.

Gamarra finished with 16 kills on 35 attacks (.371) and scored four aces. Thearchitecture major from Colombia has blitzed the opponent for 13 aces in the lastthree matches alone. Miami would finish with 11 aces in the match and an amazing37 in the last three contests.

Freshman outside hitter Christina Hernandez (Oswego, Ill.) had a personal-best12 digs to bolster the Miami defense.

“We served great and took them out of their rhythm,” said Lantagne. “We’re lookingmore experienced with every match. We got an excellent performance from ChristinaHernandez in the back row. It was her best match of the year.”

Miami takes on Arkansas State on Friday, November 2nd at 7 p.m. at the KnightComplex.