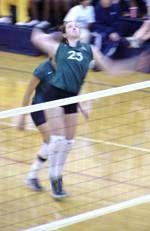 The Hurricanes improved to 12-7 overall and 9-1 at home while winning their second-straightmatch over a BIG EAST team this season. UM joins BIG EAST conference play in volleyballnext year. Pittsburgh falls to 7-14.

“We played well and had great passing,” said Tyson. “After the second game westarted picking up on our serving. It’s good that we’re peaking at the right time.”

The Hurricanes host Georgia State on Sunday at 2 p.m. in the Knight Complex. UMwill attempt to win its sixth-straight match and tenth at home.