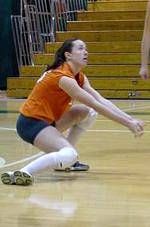 North Texas (9-12) snapped Miami’s 13-game win streak in Coral Gables by takinggame one of the match, 27-30. Sophomore outside hitter Corina Marginas (Brasov,Romania) scored nine kills in 11 attacks as the Mean Green compiled a .400 attackpercentage to UM’s .317.

The Hurricanes answered in game two. Down early by five points (8-13) Miami stormedback and freshman middle blocker Sandra Totten (Thermal, Calif.) tied the matchat 15-15. Miami got its first lead at 16-15 and led 25-22 after a strike by freshmanoutside hitter Elizabeth Tyson (Jacksonville, Fla.). Tyson would go on to scoretwo-straight service aces and Gamarra put the game away, 30-23, with one of hertrademark blistering kills.

The Mean Green rallied in the fourth game and won 23-30. The victory evened thematch at 2-2.

In the fifth and final game, North Texas jumped out to a three-point lead at 5-8.Miami went on a 4-1 run to tie the game at 9-9 on a kill from Totten. The leadwent back and forth between the teams until Valeria Tipiana put the Hurricanesup 15-14.

Tipiana scored again on the next rally off a clutch dig from Jamie Grass (ManhattanBeach, Calif.) and Miami won 16-14 to take the match as the crowd exploded.

“It was a very big win — third in a row at home and we were playing against ateam who played the best defense we had seen all season,” said Lantagne. “Theymade us fight for this one and we responded.”