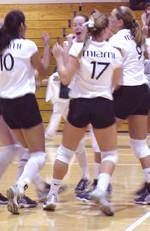 The Hurricanes (9-7 overall, 7-1 at home) handed UCF (15-3) just its third lossof the season and snapped an 11-match win streak for the Golden Knights.

Miami compiled an attack percentage of .269 for the match and held UCF to a season-low.064. The Golden Knights entered the contest ranked fourth nationally in attackpercentage.

In game two, Miami pounded the Knights with 15 kills on 34 attacks (.353) andopened up a 14-7 lead after a block from senior Kristi Sprinkel (Laguna Beach,Calif.) and Valeria Tipiana. Freshman setter Jamie Grass (Manhattan Beach, Calif.)had six consecutive service points to put the Hurricanes up 17-7. Miami wouldgo on to win, 30-18.

Miami got a quick kill by Gamarra to win game three, 30-24. Gamarra had 16 killson 27 attacks with three errors for a season-best .481 attack percentage.

“We followed an excellent performance (sweep of St. John’s) with a very good performancetoday,” said head coach Nicole Lantagne. “Beating a team that was on a roll (11-straightwins) in three games is an excellent win. We’re playing at a high level rightnow.”

“We did really well as a team and played together,” said middle blocker SandraTotten. “We dug up some balls that we haven’t dug up before. We hustled more andplayed with more intensity.”

The Hurricanes return to action on Sunday looking to stretch their homerecord to 8-1. Miami plays North Texas (9-11) at 2 p.m.