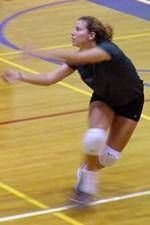 UM will stay on the road for its next match — an October 1st date at FloridaA&M in Tallahassee. The next evening, at 7 p.m., the Hurricanes face off againstrival Florida State. The match will be televised by the Sunshine Network.

The Hurricanes will play at Florida International on Friday, October 5th at 7:30p.m. The match was rescheduled in the wake of the terrorist attacks on September11th.

Miami’s next home match is against the Tulsa Golden Hurricane on October 11, 2001at 7 p.m.