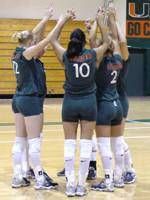 Middle Tennessee had more attacks than Miami in all three games but the Hurricaneswere more efficient. Miami had 46 kills (.368) to MTSU’s 27 (.096) for the match.

“We had contributions from everyone that dressed out today,” concluded head coachNicole Lantagne. “We played well as a team. We jumped on them early and that setthe tone for the match.”

Miami returns to action on Friday, September 28, at 7:30 p.m. at Florida Memorial.