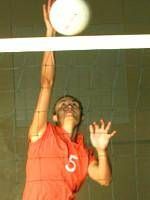 “I think it’s always important to follow a subpar performance with an excellenthome win,” said head coach Nicole Lantagne. “Anytime you can come outwith a lot of energy and execute the way you want to — you’re going to be happy.Since we didn’t do that on Tuesday (at FAU) it was nice to see a complete turnaroundwith the team tonight.”

Miami took the first game by 13 points and the second by 15. Jacksonville ralliedin the third game to win 30-25. The Hurricanes took the match with a 30-24 decisionin the fourth and final game.

Junior outside hitter Marcela Gamarra (Medellin, Colombia) had an outstandingnight with 30 kills on 51 attempts and seven errors for a kill percentage of .451.Valeria Tipiana (Lima, Peru) and Jamie Grass (Manhattan Beach, CA) scored 10 and11 kills respectively.

“It started with our passing,” observed Lantagne. “We passed verywell tonight and it allowed us to do the things offensively that we needed todo. It carried over into our whole game. We were very energetic and we got afterit tonight.”

Defensively, five Hurricanes had double-digit dig totals for the match. ValeriaTipiana and Jamie Grass had a match-high 15 digs each. Freshman setter MalloreyJames (Tucson, AZ) had 14 digs and 58 assists. Marcela Gamarra had 11 digs andSandra Totten had 10.

“It was great to have everyone in our home gym,” said Lantagne. “Nowwe just have to get everyone to be louder. Everyone’s learning volleyball hereat Miami. It’s always a bonus to be playing at home with the home crowd behindyou.”

Miami returns to action on Sunday, September 23, at 11 a.m. at the Knight SportsComplex against Middle Tennessee State.