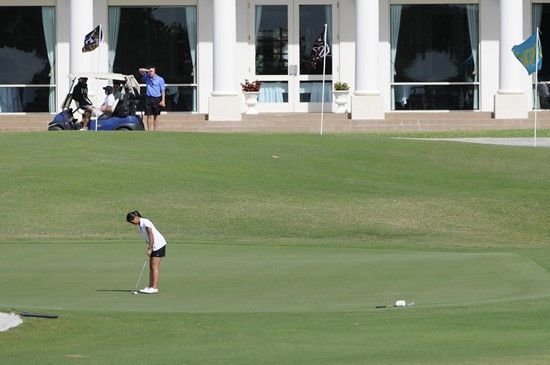 INDIVIDUAL NATIONAL CHAMPIONS
Judy Eller-Street, 1959
The very first University of Miami All-American in women’s golf, and native of Old Hickory, Tenn., Eller-Street enrolled as a non-scholarship athlete at UM in 1958. Eller-Street soon became a dominant force throughout the intercollegiate scene. In June 1958, she became the first Hurricane female athlete to win an individual championship, capturing the U.S. Women’s Amateur Title.

Roberta Albers-Speer, 1965
Albers-Speer enrolled at the University of Miami in 1965. As a freshman, she would earn All-America honors and win the 1965 National Collegiate Women’s Golf Championship as an individual. In 1967 she would earn All-America status for the second time and was the runner-up for the individual championship. Albers-Speer would be the second woman to ever be inducted into the UM Sports Hall of Fame in 1984.

Ann Laughlin, 1972
Ann Laughlin, a native of Riverton, N.J., became the first Hurricane – and first freshman – to win the AIAW national crown in 1972 with a 72-hole score of 310, while also leading the Hurricanes to a team National Championship in the same tournament. Laughlin captured the 1972 title by sinking a 30-foot putt on the final hole to secure the two-stroke victory over Florida State.

Cathy Morse, 1977In June 1977, playing at the Kuilima Country Club, Cathy Morse would fire rounds of 73-76-74-76 for a then-school-record 299 and a two-stroke victory in the AIAW National Championship. She became the fourth of Miami’s five National Champion women’s golfers in a 20-year span.

Penny Hammel, 1983After a career-threating car accident, in which she suffered a broken left wrist a week before the NCAA Championship, Penny Hammel fought to capture the program’s last individual National Championship in 1983. Hammel began the third round of the tournament three strokes behind the leaders before entering the last round tied for the lead. She then shot a 5-under 69 in the final round for a six-stroke victory and the individual national crown.