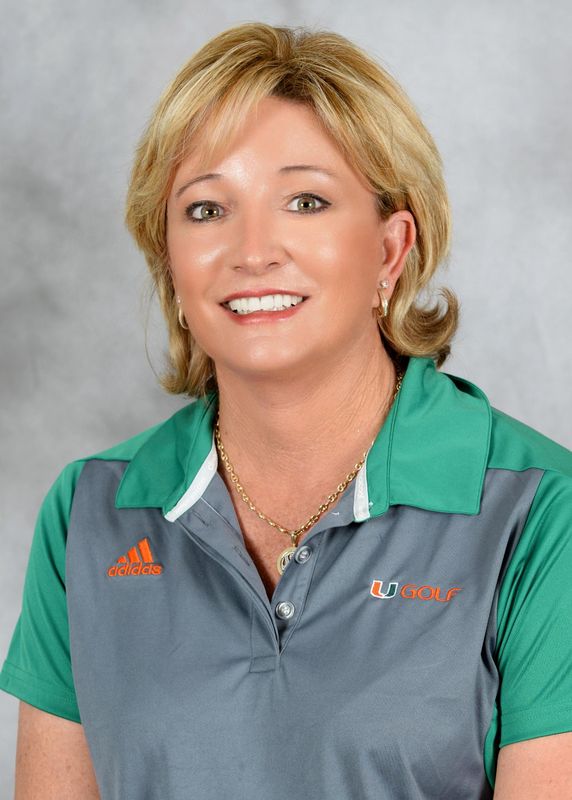 Following the COVID season, the Hurricanes found themselves right back in the NCAA Regionals for the ninth year in a row under Rizzo’s direction. The year was highlighted by freshman Nataliya Guseva who was tabbed ACC Freshman of the Year and an All-ACC Team selection. Guseva earned a spot in the NCAA Championships and top-10 finish at the ACC Championships (sixth) in her first year as a Cane. The Moscow, Russia, native tallied the second lowest season scoring average, 71.44, in school history with Rizzo’s coaching. The freshman recorded a top-10 finish in four of seven tournaments she competed in.

Joining the success of Guseva was Renate Grimstad who was garnered a Second-Team All-American, the sixth player under Rizzo to collect all-american honors. As a team, Miami notched three top-five team finishes.

In a season shortened by COVID-19, Miami posted eight top-10 individual finishes in 2019-20 in seven tournaments. The Canes notched 18 top-15 program marks on the year. Renate Grimstad and Anna Backman highlighted the season, each earning a tournament title. UM capped off the fall with a third-place finish at the Jim West Challenge with a score of 848 (16-under).

During the 2018-19 season, the Hurricanes reached NCAA Regionals for the eighth straight season and set several program records during the year. The Hurricanes set five school records at the Schooner Fall Classic and Illini Invitational. In Norman, Miami set the program marks for lowest three-day total (833), two-day total (542) and one-day totals (267 and 275) on a par-71 course. At the Medinah Country Club golf course, the Canes scored the lowest par-72, 54-hole total (846) in program history.

In 2017-18, Miami earned three tournament team titles – Florida Challenge, UCF Challenge and Hurricane Invitational – on its way to the seventh straight NCAA Regional appearance under Rizzo. The Canes were led on the year by Dewi Weber, an All-American honorable mention and ACC All-Conference Selection in 2018, posted six top-10 finishes in 10 tournaments. Weber took home the individual title at the UCF Challenge with a score of 209 (-7). In addition to Weber, the duo of Renate Grimstad and Macarena Aguilera combined for five top-10 finishes.

Rizzo directed the Hurricanes to the NCAA Championship for the second straight season in 2016-17. Miami finished 16th at the 2017 national tournament to record the program’s 10th top-20 performance in tournament history.  The Hurricanes’ 16th-place finish also was their best since the 1992 appearance when they placed 10th.

The 2016-17 campaign also saw Miami post its best ACC finish ever, as it took third.

In 2015-16, Rizzo led Miami to its 24th trip to the national tournament following a fifth-place finish at the NCAA Bryan Regional. Under Rizzo’s watchful eye, Miami posted three top five finishes, including a third-place finish at the Hurricane Invitational.

Miami individuals Daniela Darquea and Weber also shined in 2015-16 as both earned All-America honors from Golfweek and the WGCA. In addition, Darquea earned All-ACC honors for the third consecutive season and was named ACC Scholar Athlete of the Year. Weber led the ACC in scoring average and took national runner-up honors at the NCAA Championship.

During the 2014-15 campaign, Rizzo guided the Hurricanes to seven top finishes, including a tournament victory at the Florida Challenge. Following the regular season, the Hurricanes qualified for their third straight NCAA Regional Championship.

In her third season, Rizzo led the Hurricanes to an NCAA West Regional berth, their first NCAA postseason trip since 2005. The Canes finished 21st out of 24 teams in Stanford, Calif. The Canes posted six top-five finishes in 2012-13, including a fifth-place showing at the ACC Championship, which tied for the program’s best finish. Sophomore Leticia Ras-Anderica earned All-ACC honors, becoming the first Canes golfer to do so since 2011.

In her first two years, Rizzo guided the Hurricanes to eight Top 10 finishes and a final 2011-12 ranking of No. 59, up from No.112 prior to the start of the season. Her coaching success off the course is just as impressive. For the second straight year the UM women’s golf program has been recognized for their academic achievements by the NCAA, by placing themselves in the Top 10 percent of the annual Academic Progress Rate (APR).

The 2011-12 season saw a freshmen-laden team, led by Ras-Anderica and Rika Park, finish in the Top 10 five times including a 54-hole first place tie with then No.16 Ohio State University at the Hurricane Invitational. Under Rizzo’s tutelage her first recruiting class led the team the entire season in stroke average and by the end of the season saw two of the three newcomers earn selections into the NCAA post-season – Ras-Anderica and Park. The team finished the regular-season ranked No.59 in the Golfstat.com poll, its highest final regular-season ranking since 2004 where they ranked No.42.

“I’m extremely excited,” Rizzo said upon being hired. “I’ve been dreaming of this opportunity. I started my career at the University of Miami and things have come full circle where I have the chance to finish up where I started. I am so appreciative of the support from my family, friends and the people at Miami. I am just so thrilled to be back.”

Rizzo brings outstanding amateur, collegiate and professional experience to the position. Her amateur career was highlighted by a near win at the 1981 Florida Lady Citrus in Orlando, where she almost became the first amateur since JoAnne Carner (1969) to win an LPGA event. She finished regulation play in a five-way tie for first-place. Rizzo won the World Amateur, Trans-National, Eastern Amateur and Mexican Amateur in 1980 and the North & South Amateur Championship, the South Atlantic Amateur Golf Championship and the Harder Hall Invitational in 1981.

She also claimed medalist honors at the 1981 U.S. Women’s Amateur, as well as at the 1980 and 1981 AIAW National Championships. A 1981 collegiate All-American at the University of Miami, she was Golf Digest’s top-ranked amateur in the country in 1980 and Golf Magazine’s top-ranked collegiate player in 1981.

In 1982, she joined the LPGA full-time and was named the circuit’s Rookie-of-the-Year, with five top-10 finishes, including fourth-place at the Arizona Copper Classic. In 1983, she won her first LPGA tournament at the Boston Five Classic and posted six additional top-10 finishes. Rizzo played on the tour regularly for 10 years, posting four tournament wins: the 1983 Boston Five Classic, the 1985 LPGA Corning Classic, the 1988 Sara Lee Classic and the 1989 Red Robin Kyocera Inamori Classic. She still holds her LPGA Tour card, but after a brief two-year retirement, she returned to play part-time on the LPGA and Legends Tours during summer of 2006.

Rizzo has two children – one son, Sevi, and one daughter, Gabriela.