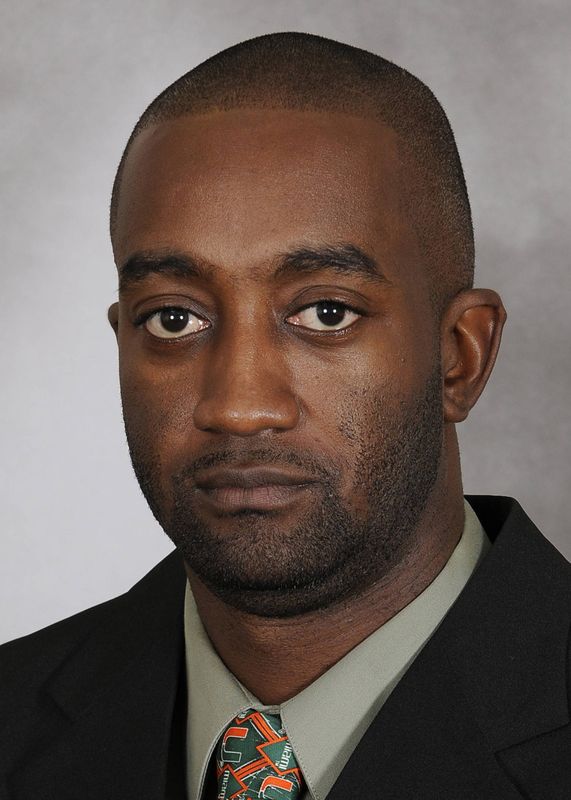 Damon Griffiths joined the University of Miami’s Track and Field coaching staff in 2008, working with the men’s and women’s middle and long distance runners as well as the cross country team.

While working with the Hurricanes, Griffiths has helped coach Miami to three ACC Women’s Track and Field Championships in a row, winning indoor in 2016 and 2017 and outdoor in 2018.

Griffiths saw two women post top-five finishes in seven events in 2018. Freshman Kayla Johnson had a break out season and finished her first campaign with the Canes with the best 800m mark in school history, while Anne den Otter broke the 1000m record that had been set 20 years earlier by Latrice Shaw in 1998.

Senior Sean Grossman also had an outstanding 2018 campaign after he finished the season holding the top finishes in five events: indoor 3,000m, 5,000m, and the outdoor 3,000m, 5,000 and 10,000m. Grossman made Miami history by scoring at the ACC outdoor meet, becoming the first distance runner to advance to the NCAA East Preliminary.

Nathan Kuck also had a standout campaign posting Miami’s second-best time in both the 5,000m and the 10,000m, just behind Grossman in both events. Kuck was Miami’s top male finished in all six races in 2017 in his final cross country season and holds the program’s top mark in the men’s 8K at the ACC Championships. The men’s cross country team had a program’s best season and concluded with a trio of runners finishing in the top 50 at the 2017 South Regional.

Griffiths helped four-year runner Gabrielle Hesslau to a standout senior campaign in 2017, when she posted four school records in Miami history — two indoor and two outdoor. Hesslau was also the first distance woman to score in the 10,000m at the ACC outdoor meet.

Griffiths’ time with Alaine Tate and Thandi Stewart saw the two post school records in the 800m, with Tate’s 2013 time of 2:06.09 standing as the UM record to date. The pair were both ACC finalists in their respective events, while Tate was the ACC Indoor runner up in the 800m.

Tate, Wright, Stewart and Arrington set the school record in the indoor DMR with a 11:35.75 mark in 2014 and became the first team to score in a conference meet in Hurricane history.

Greg Kaczka set school records in the indoor mile and DMR and in the outdoor 1,500m and DMR in 2013.

The 2009 season saw the emergence of freshman Janet Price, who participated in the USA Junior Championships in the 800m run. Griffiths also coached Patrick O’Donnell to a school record time of 2:27.55 in the men’s 1,000m run.

UM placed three finalists in the 800m final at the 2008 ACC Indoor Championships, with Tim Harris and Patrick O’Donnell on the men’s side and Ena Leufroy for the women. The men’s quartet of Harris, O’Donnell, Cory Nelms, and Richard Bernard broke the indoor school record in the distance medley relay.

Griffiths competed for the University of Miami from 1993-1997. He competed in events ranging from the 400-meters to cross country. During his stay, he was a record holder of four indoor events (800m, mile, 4X400 relay, distance medley relay) and five outdoor events (800m, 4X400 relay, 4X800 relay, sprint medley relay and distance medley relay). Griffiths served as the cross country team captain while earning all-state honors his sophomore and junior years. Griffiths ran the 400 leg on the 1994 Penn Relays Championship sprint relay team, the only one in school history.

Griffiths earned his Bachelor of Science in speech communications and sociology from the University of Miami in 1997.