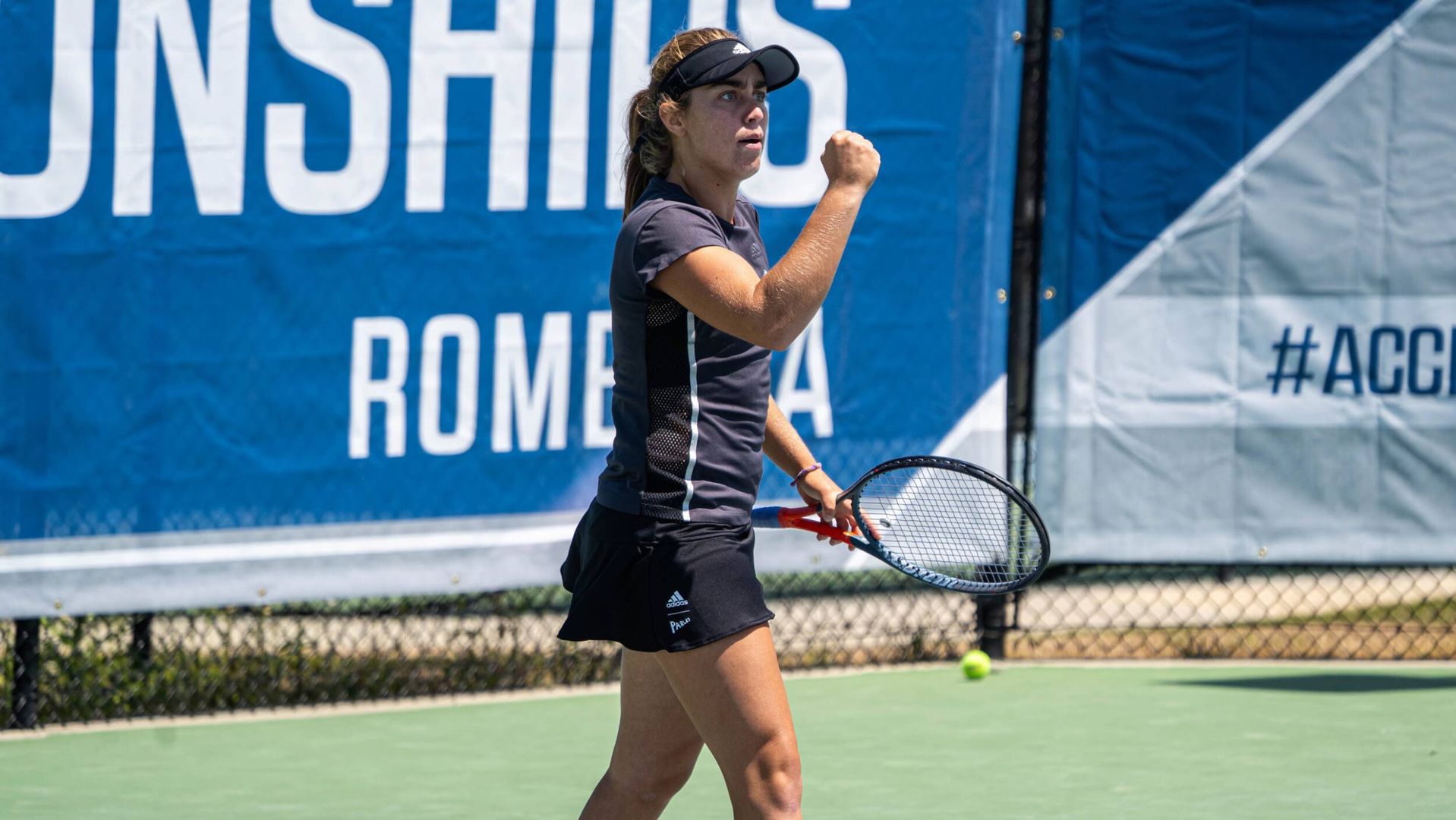 The seventh-seeded Hurricanes, ranked No. 24/20 nationally, used a pair of dominant doubles victories and a trio of straight-set singles triumphs at the Rome Tennis Center at Berry College to advance to the quarterfinals.

“I was pretty happy with the way we came out and handled the situation [while] having four kids here for the first time playing in the conference tournament,” Miami head coach Paige Yaroshuk-Tews said. “They were very loose, they were smiling and they were ready to play. As a coach, you’re happy to see that from a team heading into their first match of postseason play.”

Notre Dame (11-13, 4-9 ACC) jumped out to a strong start in doubles behind a 6-1 victory in a top-25 showdown, as No. 22 Cameron Corse and Page Freeman took six games in a row against Miami’s No. 25-ranked duo of fifth-year senior Estela Perez-Somarriba and freshman Isabella Pfennig.

The Hurricanes then quickly leveled the doubles tally with a win on Court 2 in the other top-25 matchup. Second-year freshmen Diana Khodan and Maya Tahan, ranked No. 24, defeated No. 10 Ally Bojczuk and Julia Lilien, 6-2, for their second top-10 triumph of the spring.

“I was pretty impressed with number two doubles today,” Yaroshuk-Tews said. “I thought they played really well, really smart. [They were] volleying well and very aggressive.”

Once singles play began, it did not take long for Khodan to tack on another point for the Hurricanes, she picked up a 6-3, 6-3 victory over Yellayi in her first-career ACC Championship appearance.

Urrutia, also in her first conference tournament singles match, upped the lead to 3-0 by defeating Lilien, 6-4, 6-2.

Notre Dame, ranked No. 50 in the ITA Coaches Poll, got its lone point of the day with a 6-4, 6-4 victory from Andreach over Tahan, yet another Hurricane in the event for the first time.

Moments after the Fighting Irish got on the board, fourth-ranked Perez-Somarriba squashed any hopes of a comeback by clinching the victory. For the 158th win of her illustrious career, the Madrid native downed Corse, 6-4, 6-2.

With the win, Miami improved to 20-14 all-time in the ACC Championship. The Hurricanes have reached the quarterfinals every single year they have competed in the event, dating back to 2005.

In addition, by winning its 11th matchup in the last 12 meetings, Miami moved to 15-11 all-time against Notre Dame, including 2-0 in ACC Championship competition.

Up next for the Hurricanes is a quarterfinal matchup with second-seeded Florida State, ranked No. 6/7 nationally, Friday at 11:30 a.m. in Rome.

The in-state foes met just 13 days ago in Tallahassee, Fla., in their final conference match of the year, with the Seminoles earning a 4-3 victory inside the Scott Speicher Memorial Tennis Center.