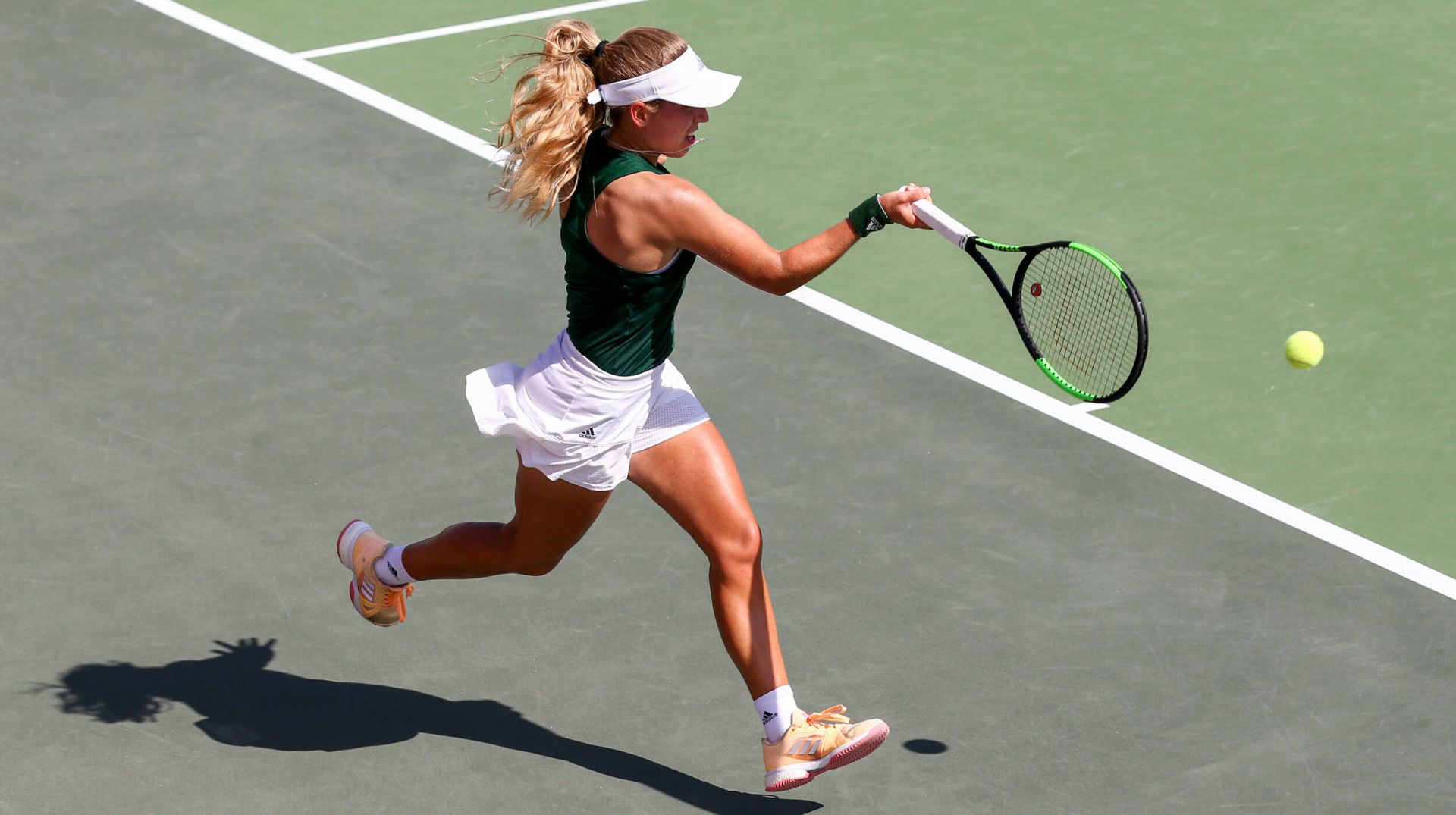 After coming up just short in doubles, No. 29 Miami (9-6, 6-4 ACC) took all five tiebreakers during singles action on the way to a trio of wins, but fell one point shy of the overall decision.

“I think, across the board, they played the big points more aggressively than us,” Miami head coach Paige Yaroshuk-Tews said. “When you play that way and you’re looking to get into the net to create opportunities—across the board, not just at one position, but at all positions—it makes a difference in a 4-3 match. That’s something that we’ve been talking about and we expected coming into the match, but they were just able to execute better in those moments.”

The Hurricanes got on the board first in doubles behind the dazzling performance of second-year freshmen Diana Khodan and Maya Tahan, who are ranked No. 37.

Facing the nation’s seventh-ranked pair of Jaeda Daniel and Adriana Reami, the Miami duo cruised to a 6-0 triumph for their first top-10 win. It also marked the first such decision by a Hurricane pair March 29, 2019, one day shy of exactly two years prior.

NC State (13-3, 7-2 ACC) leveled the doubles tally behind a 6-2 victory by No. 14-ranked Anna Rogers and Alana Smith over Miami’s No. 22-ranked pair of fifth-year senior Estela Perez-Somarriba and freshman Isabella Pfennig.

In the decisive contest, third-year sophomore Daevenia Achong and second-year freshman Florencia Urrutia fought off two match points, but Amelia Rajecki and Abigail Rencheli broke at deuce to post a 6-4 win. Their rally from 1-3 and 3-4 deficits gave the Wolfpack the doubles point and snapped Miami’s six-match streak of taking the opening point.

Daniel opened singles play by doubling NC State’s lead to 2-0 by defeating Urrutia, 6-4, 6-2. The Hurricanes, however, bounced right back to level the score.

In a top-10 showdown, No. 10 Perez-Somarriba defeated fifth-ranked Rogers, 7-6 (7-2), 6-1, to log Miami’s first point of the day. The Madrid native improved to 5-3 against top-five foes with the win, as well as logged her 153rd total singles victory, passing Georgia Tech’s Kristi Miller for sole possession of third place in ACC history.

Khodan evened the match at 2-2 by winning a pair of tiebreakers against Lexi Keberle, notching a 7-6 (7-3), 7-6 (7-5) decision. It marked her seventh straight triumph after starting the spring 2-3.

The two remaining matches were also in third sets, with the Hurricanes needing both to pull off the upset. However, in the first of them to finish, Rencheli staved off Tahan’s comeback bid with a 6-2, 6-7 (6-8), 6-2 decision to clinch the win for NC State.

Miami’s setback snapped a six-match winning streak that is now bookended by 4-3 defeats against teams ranked in the top 11.

“We’re playing better tennis,” Yaroshuk-Tews said. “We’ve still got a ways to go, but we’re moving in the right direction. We’ve just got to keep our heads up and just get back to work.”