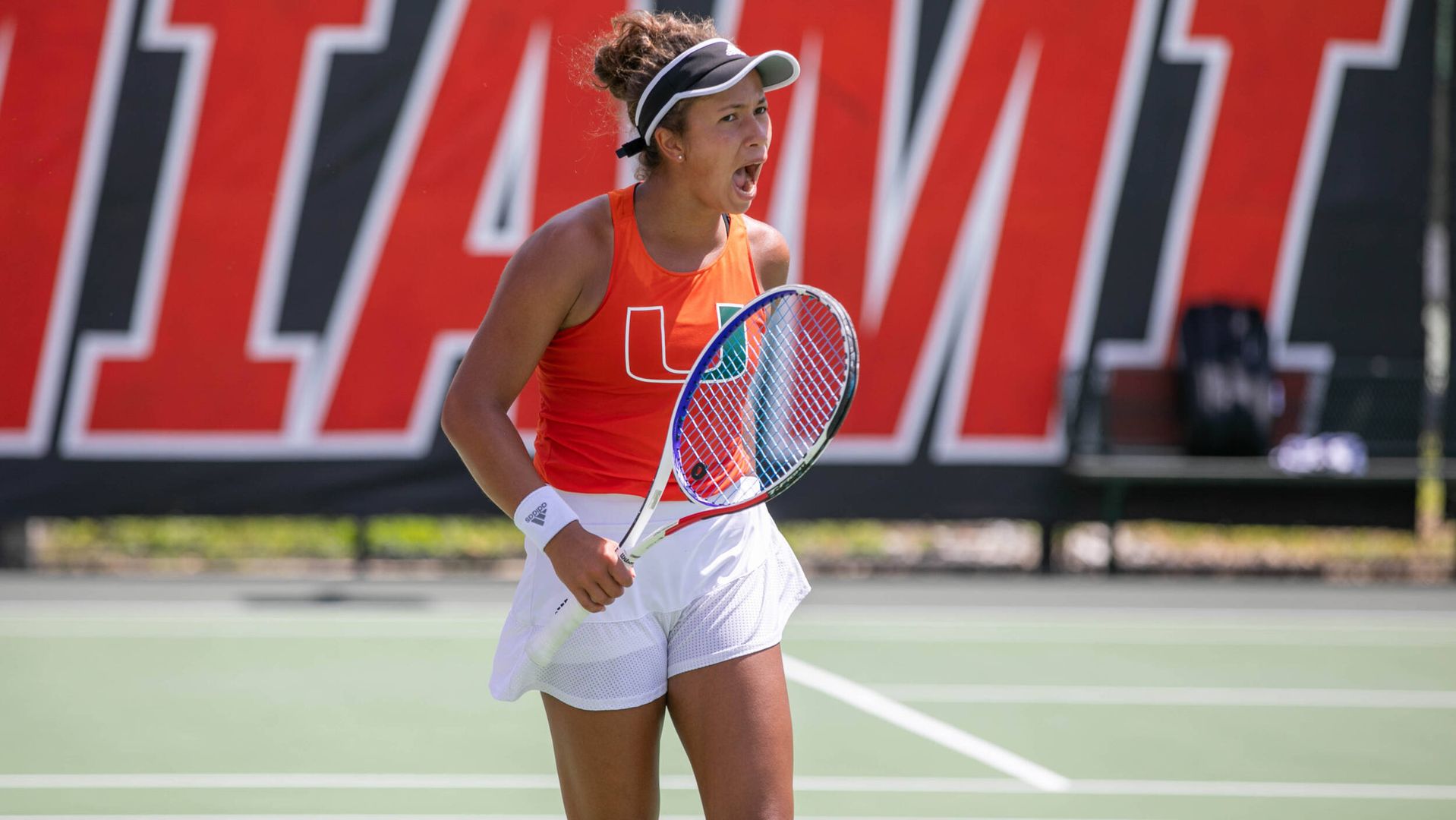 No. 29 Miami (9-5, 6-3 ACC) dropped just one set on the day, en route to its sixth consecutive victory, including its second shutout of that stretch.

“We’re getting greedier, which, when you play tennis and you step between the lines, is kind of the mindset you have to have,” Miami head coach Paige Yaroshuk-Tews said. “I think towards the beginning of the season, it was like, ‘Of course we want the team win.’ But I think everybody is starting to understand that we’re just a stronger unit all the way around going into our next match if everybody comes away with a win, in addition to getting the team win. So, I think these girls are starting to understand that.”

All three doubles matches were close throughout, with each match sitting at 5-4 at the same time. Miami, however, closed out a pair of contests to take the opening point for the sixth time in a row.

The lone remaining match was left unfinished with Miami’s second-year duo of Diana Khodan and Maya Tahan, ranked No. 37, deadlocked at 5-5 with the Wake Forest (9-7, 5-4 ACC) pair of Brooke Killingsworth and Casie Wooten.

In singles play, Tahan registered the first victory for Miami, doubling the lead to 2-0, by defeating Wooten, 6-3, 6-2.

Shortly thereafter, No. 34 Pfennig, in her first match as a ranked player, wrapped up a 6-4, 6-2 win against No. 32 Ana Campana in a top-35 showdown. It marked the second-highest-ranked victory of Pfennig’s young career.

Achong provided the clinching point for the Hurricanes by posting a 6-4, 6-3 triumph against Killingsworth.

The remaining matches were all played out, with Khodan sealing the first decision. She upped her winning streak to six in a row with a 7-5, 6-3 victory against Pesavento.

“I think you’ve got to note and point out the job that [Maya and Diana] are doing down at five and six,” Yaroshuk-Tews said. “That’s something I’ve been talking about since the beginning of the season. If we could develop those pillars, at the top and at the bottom, we’re going to be pretty hard to beat. They’ve done a great job down there at five and six.”

Just seconds later, No. 10 Perez-Somarriba finished off a 7-5, 6-4 triumph over No. 12 Carolyn Campana in a top-15 affair. With the win, the Madrid native moved to 14-7 in her career against top-12 players and tied Georgia Tech’s Kristi Miller for third place on the ACC all-time leaderboard with 152 singles wins.

The Hurricanes improved to 22-1 all-time, including 12-1 at home, against Wake Forest with Friday’s result. Miami, which posted a 7-0 win over the Demon Deacons for the second straight time, has now won 18 consecutive matches in the series, dating back to 2004.

In addition, the decision marked the 152nd sweep of Yaroshuk-Tews’ 20-year tenure as the Hurricanes’ head coach, including the 95th such decision since 2009.

“It kind of empowers them as a team when you come out here and [win 7-0 against] a team that is 26th in the country and has good results,” Yaroshuk-Tews said. “Now, we feel a little bit better going into Sunday. I’m noticing that we’re respecting the points more. Each point, each game, each set, each match. That’s something I think great teams need to do.”

Miami resumes its seven-match homestand Sunday at 2 p.m. when it welcomes No. 11 NC State to the Neil Schiff Tennis Center.