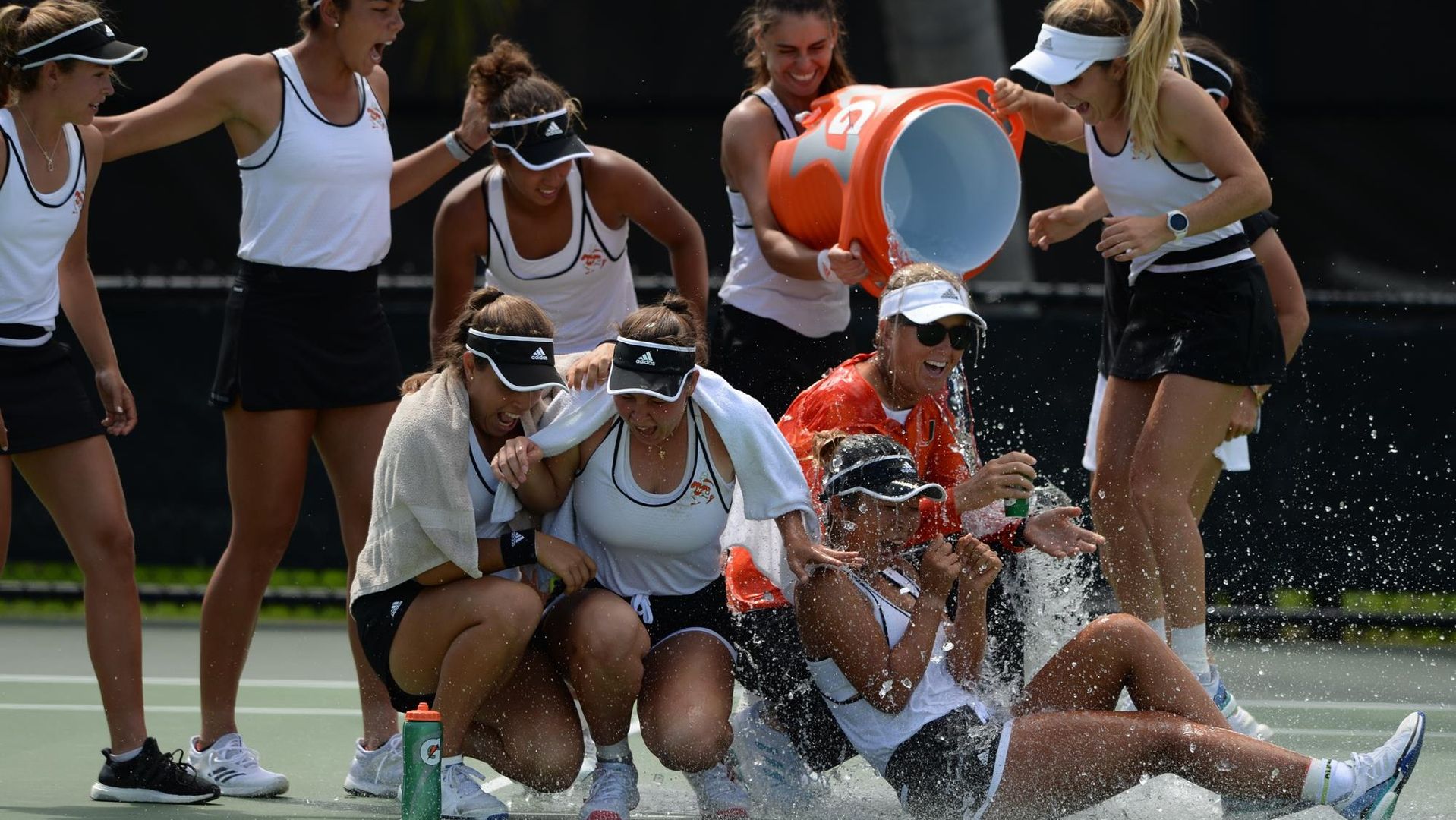 The triumph also served as the 350th victory in the illustrious career of 18th-year head coach Paige Yaroshuk-Tews, a UM Sports Hall of Fame member.

Junior Yuna Ito and senior Ana Madcur got No. 29 Miami (13-5, 6-4 ACC) off to a dazzling start in doubles play, logging a 6-0 victory over Alexis Franco and Anna Ulyashchenko.

In the lone ranked doubles matchup, freshman Daevenia Achong and senior Daniella Roldan clinched the opening point for Miami. Ranked No. 34 nationally, the Miami duo notched a 6-2 triumph over No. 38 Chandler Carter and Emma Davis.

When play was halted—the first time Miami has not had all three matches played out since March 15—junior Estela Perez-Somarriba and sophomore Ulyana Shirokova were tied, 3-3, against MC Meredith and Eliza Omirou.

Achong was the first Hurricane to get on the board in singles play, turning in a stellar outing to log a 6-2, 6-1 victory over Ulyashchenko.

Miami’s other freshman in the singles lineup, Lucia Marzal, logged its next point. The Valencia, Spain, native defeated Saby Nihalani, 6-1, 6-3, to move the Hurricanes within a point of victory.

“I think these kids really needed this. I think there is a little bit of a monkey off their back now,” Yaroshuk-Tews said of Miami’s first top-15 win of the year. “We’ve come close to top teams . . . and I think they just needed today to really prove to themselves that they’re a top program. We’ve had really high highs. I don’t think we’ve had any real low lows, but we just haven’t been able to execute, connect and complete matches. So, it was nice to be able to complete the match today.”

The Demon Deacons got their lone point of the afternoon from Carter, who recorded a three-set win against Shirokova, 6-3, 4-6, 6-3.

Madcur concluded the match by tallying on the Hurricanes’ sixth and final point, as she edged Franco in a lengthy straight-set affair, 7-6 (8-6), 6-4.

The Hurricanes improved to 21-1 in their all-time series against Wake Forest with Sunday’s victory and have now won 17 consecutive matches against the Demon Deacons.

Up next for Miami is a two-match weekend road trip that begins Friday at 2 p.m. in Chestnut Hill, Mass., against Boston College.