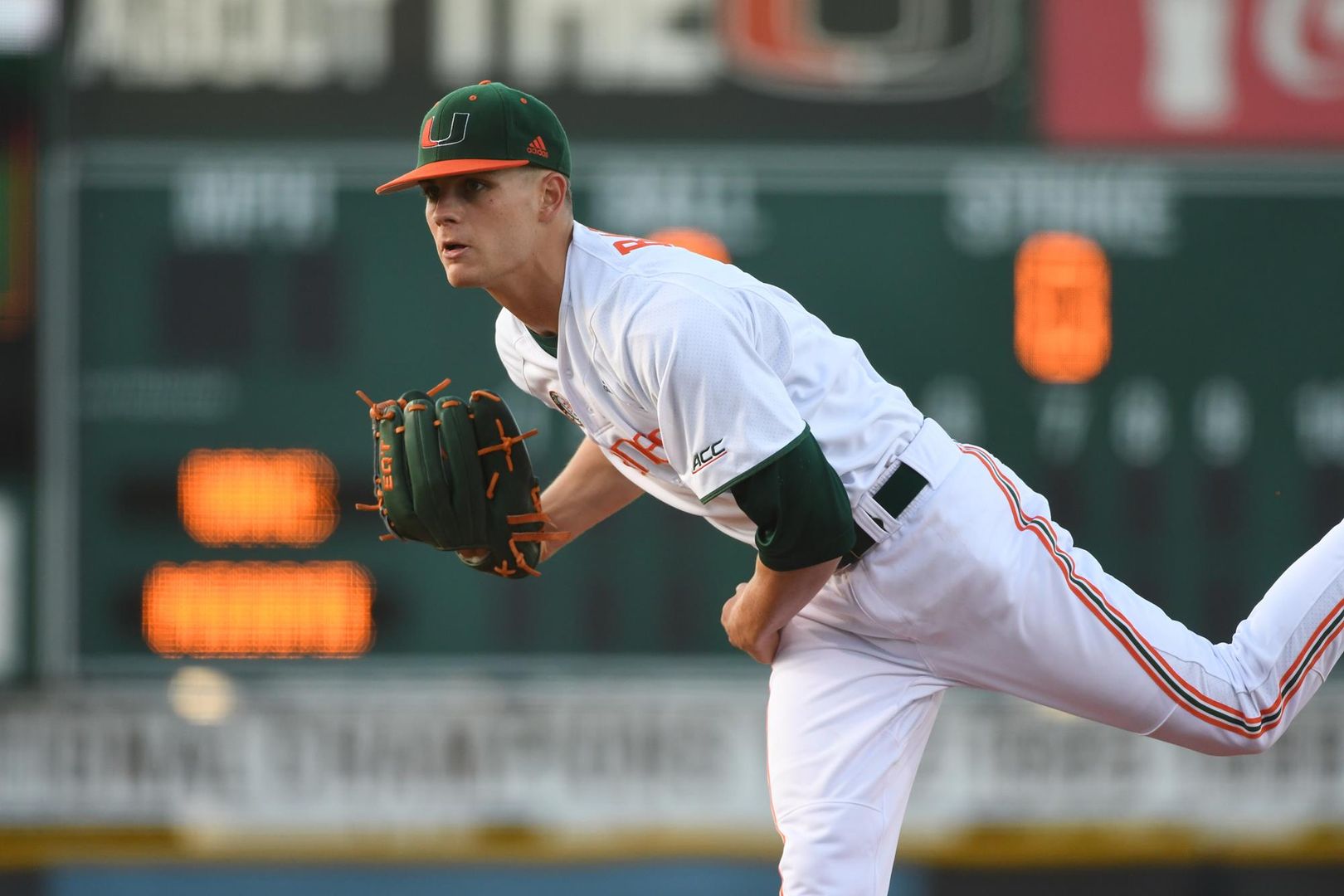 The Force Is Strong With Bargfeldt In 4-2 Win

Bargfeldt, who tossed eight strong frames last Friday in the opener at No. 14 Florida State, continued his impressive second half of the season with 7.2 innings against the Wildcats.

Bargfeldt (3-4) struck out a season-high nine for the second straight start and allowed just one run to guide Miami (19-25) to victory in its last nonconference weekend of the season.

“I’ve been throwing the breaking ball really well,” Bargfeldt said of his recent run of success. “When you’re able to locate a good breaking ball, that’s going to be successful at any stage. The last two starts, I’ve been able to throw a cutter and a curveball, and that helps me with another pitch in my arsenal.”

The Hurricanes took a 1-0 lead in the second, padded their lead to 3-0 in the third and cruised to victory in front of 2,452 fans.

Senior Frankie Bartow entered with two outs in the eighth and recorded the game’s final four outs for his third save of the season.

“Every game is huge right now – no matter if it’s against Florida State or Bethune-Cookman, or next weekend against Virginia Tech,” Bargfeldt said. “We need to gain some ground. We need to get into a position where we’re playing great baseball going into Durham and the ACC Tournament.”

Miami opened the scoring in the second on a sacrifice fly from senior Hunter Tackett.

Norris struck out freshman Raymond Gil to avoid any further damage and keep the deficit at one, but Miami added a pair of runs an inning later.

An RBI single from Burns scored freshman Freddy Zamora, who singled to open the inning, and an error charged to Wildcats shortstop Nate Sterijevski on the play allowed junior Romy Gonzalez to score from third on some heads-up baserunning.

Miami made it a 4-0 lead on the Wildcats (18-29) on an RBI double form junior Danny Reyes in the fourth.

Bargfeldt did not allow a run until a sacrifice fly in the sixth from Bethune-Cookman’s Adonis Lao.

In the eighth, the Wildcats added a run on an infield single from Jameel Edney, signaling the end of Bargfeldt’s night. Bartow entered and promptly induced a lineout from Danny Rodriguez to end the inning and keep Miami ahead at 4-2.

In his last three starts – all quality outings – Bargfeldt has allowed just five runs in a combined 22.2 innings for a 2.02 ERA. He has 24 strikeouts and three walks over that same timeframe.

A second-team All-ACC selection a season ago, the southpaw has allowed two or fewer runs in 19 of 27 starts since arriving in Coral Gables prior to last year.

“Just getting ahead,” Bargfeldt said when asked about his recent run of success. “During the middle of the season, I started falling behind hitters. Once you do that, it makes it tough to go deep in games and save your bullpen.

“The biggest key for me is getting strike one and working off of that.”

The Hurricanes and Wildcats return to Alex Rodriguez Park at Mark Light Field Saturday for Game 2 of the series. First pitch for the contest, slated for broadcast on ACC Network Extra and WVUM 90.5 FM, is set for 7 p.m.