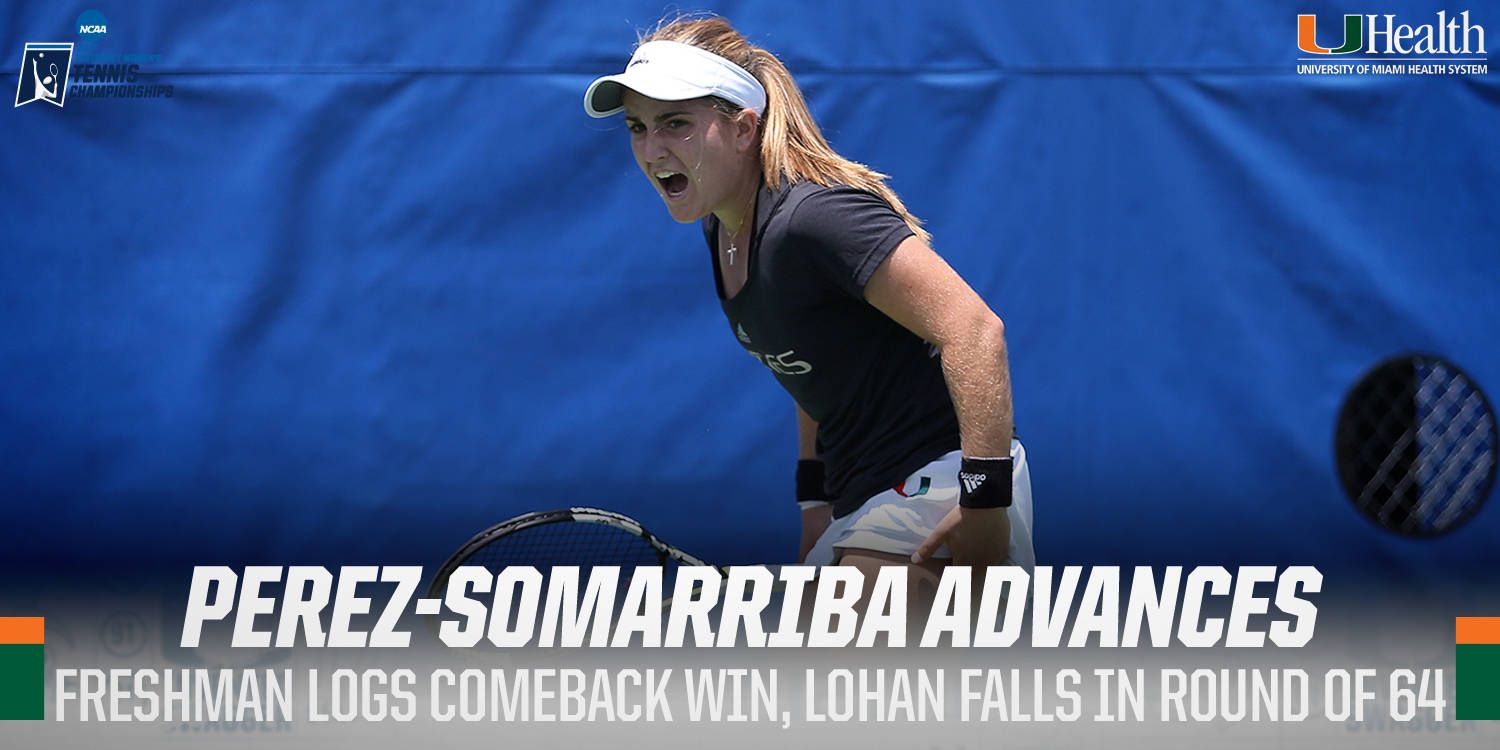 ATHENS, Ga. – The University of Miami women’s tennis team’s two competitors in the NCAA Singles Championships each went three sets in their first round matches Wednesday at the Dan Magill Tennis Complex.

The Hurricane who dropped her first set, freshman Estela Perez-Somarriba, posted a comeback victory, while the one who won her opener, junior Sinead Lohan, came up just short.

“That was a match that, when I look at it, was completely on Estela’s shoulders,” Miami head coach Paige Yaroshuk-Tews said of the Madrid native’s win. “She lost the first set and then she won the second and the third set, but I think it had more to do with her than it had to do with her opponent. I’m very happy about her level of maturity to come out here, figure things out and get through a time and end up playing well.”

Playing the first NCAA Singles Championship match of her young career, Perez-Somarriba dropped five games in a row to open the contest against Oparenovic, en route to losing the first set, 1-6.

From there, Perez-Somarriba took over the match. She won 12 of the last 14 games, including 10 of the final 11, with a stretch of nine straight victories, en route to advancing.

Over the final two sets of the contest, Perez-Somarriba recorded a break all seven times Oparenovic was serving, including doing without dropping a point in the final game of the match.

Perez-Somarriba also had to deal with both a late opponent and time changes in her match. The First Team All-ACC honoree was initially scheduled to face fourth-ranked and third-seeded Astra Sharma of Vanderbilt, but she withdrew from competition late Tuesday night.

Additionally, her match was a part of the first round of play Wednesday and was bumped up from 9 a.m., to 8 a.m., in an attempt to beat the rain, but then did not start until just after 8:40 a.m., due to damp courts.

Nonetheless, Perez-Somarriba rolled to her 12th consecutive win of the year and moved to 9-1 against nationally-ranked opponents this spring, including 5-0 versus top-70 players. She is one of nine freshmen to earn a berth in the Round of 32.

“A change in the draw late in the evening and an 8 a.m., match against a kid who you’re not really prepared to play or know a whole lot about, as a freshman, is a little difficult,” Yaroshuk-Tews said. “So, I think, Estela emotionally was kind of out of sorts in the first set and wasn’t playing her game . . . Once she was able to make a few minor changes, the match just completely changed around.”

In a rematch of last year’s NCAA Singles Championship Round of 64 contest, Lohan’s match with Minor featured breaks in eight of the first 13 games and four of the final eight, with six consecutive holds in the middle.

Playing just her fourth three-set match of the spring and first since Feb. 24, Lohan took a 2-0 edge in the decisive set. However, Minor staved off 0-30 deficits in each of the next two games and went on to take a 4-2 edge that Lohan could not overcome.

“I think the first set [she had] a lot of energy, was moving well and striking the ball well, as was Minor. In the second set and, I would say, 60 percent of the third set, physically, I think Brienne just [excelled],” Yaroshuk-Tews said. “As bad of shape as Minor was in—she wasn’t in great shape [and called an injury timeout]—I think that she separated the match physically. Sinead wasn’t moving, wasn’t playing her game and wasn’t playing anywhere near the level she played in the first set. You’re not going to beat a Minor [like that].”

Lohan, who reached the NCAA Singles Championship quarterfinals in 2015 and the semifinals in 2016, concludes her junior campaign with a 23-13 record after posting 13 victories over ranked opponents.

Perez-Somarriba will return to the court Thursday at 9 a.m., for her NCAA Round of 32 matchup against No. 27 Arianne Hartono of Ole Miss. The victor clinches prestigious ITA All-America status.