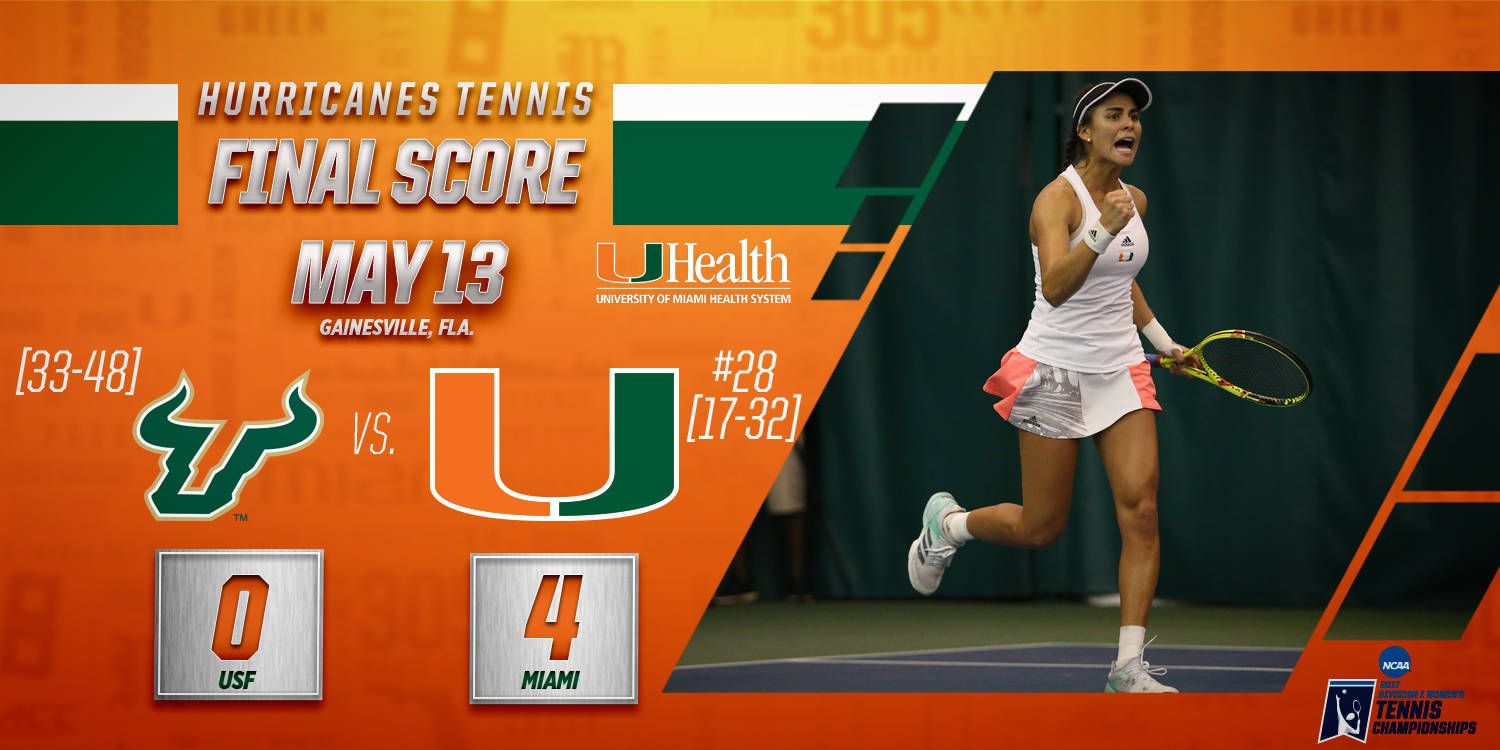 “I’m proud of how the girls are playing right now,” Miami head coach Paige Yaroshuk-Tews said. “I’m happy that they’re able to experience the tournament [in spite of] the little adversity that we had this season. We’re obviously playing good tennis when it counts.”

The final match was left unfinished with the USF (15-11, 7-2 AAC) duo of Nicole Dzenga and Vanja Klaric holding a 5-3 edge over redshirt senior Maci Epstein and junior Silvia Fuentes.

“I think we’re playing better doubles,” Yaroshuk-Tews said. “I think we’re doing well in situations where maybe we don’t start off as quickly as we would like, but we’re turning the corner faster in the matches. We’re not waiting four games to turn the corner. You wait four games in doubles, you’re done. We’re seeing changes that we need to make earlier, we’re executing and we’re implementing change.”

In singles action, the Hurricanes got their first two points from a pair of freshmen competing in the NCAA Team Championship for the first time.

Paterova got on the board first with a scintillating showing against Cardoso, cruising to a 6-1, 6-1 victory to double Miami’s lead.

“Domi is playing the best tennis we’ve seen her play all season, hands down,” Yaroshuk-Tews said. “As you move forward in a tournament or a season, one player could be a game changer and we need her to keep playing the tennis she’s playing. It’s fun to see her play. She’s competing hard, she’s playing aggressive.”

No. 40 Perez-Somarriba increased the Hurricanes’ advantage to 3-0 by registering a 6-4, 6-4 triumph against Bessonova to up her winning streak to 10 in a row.

No. 21 Lohan, who won 10 games in a row during her match, clinched the victory for Miami with a 6-2, 7-5 win over Ana Roman Dominguez. The Waterford, Ireland, native is now 12-3 in NCAA matches in her career, with a 5-1 mark in the team competition to go along with a 7-2 ledger in the singles event.

“I think Lohan is striking the ball better. I think she’s doing her thing, she’s taking care of business at one,” Yaroshuk-Tews said. “Estela, same thing. One and two, those girls are doing what they’re supposed to be doing.”

When play was halted, Fuentes held a 6-1, 1-2 advantage against Klaric. Meanwhile, Madcur’s contest against Dzenga finished with neither play getting on the board, as just a handful of points were completed. Epstein’s match versus Chaves did not officially begin.

The contest took place at the three-court indoor facility despite an unsuccessful attempt to beat the incoming rain by moving the start time up one hour, to 9 a.m.

Miami will play its second round match Sunday at 1 p.m., against homestanding Florida, the top-ranked and top-seeded Florida team in the nation.