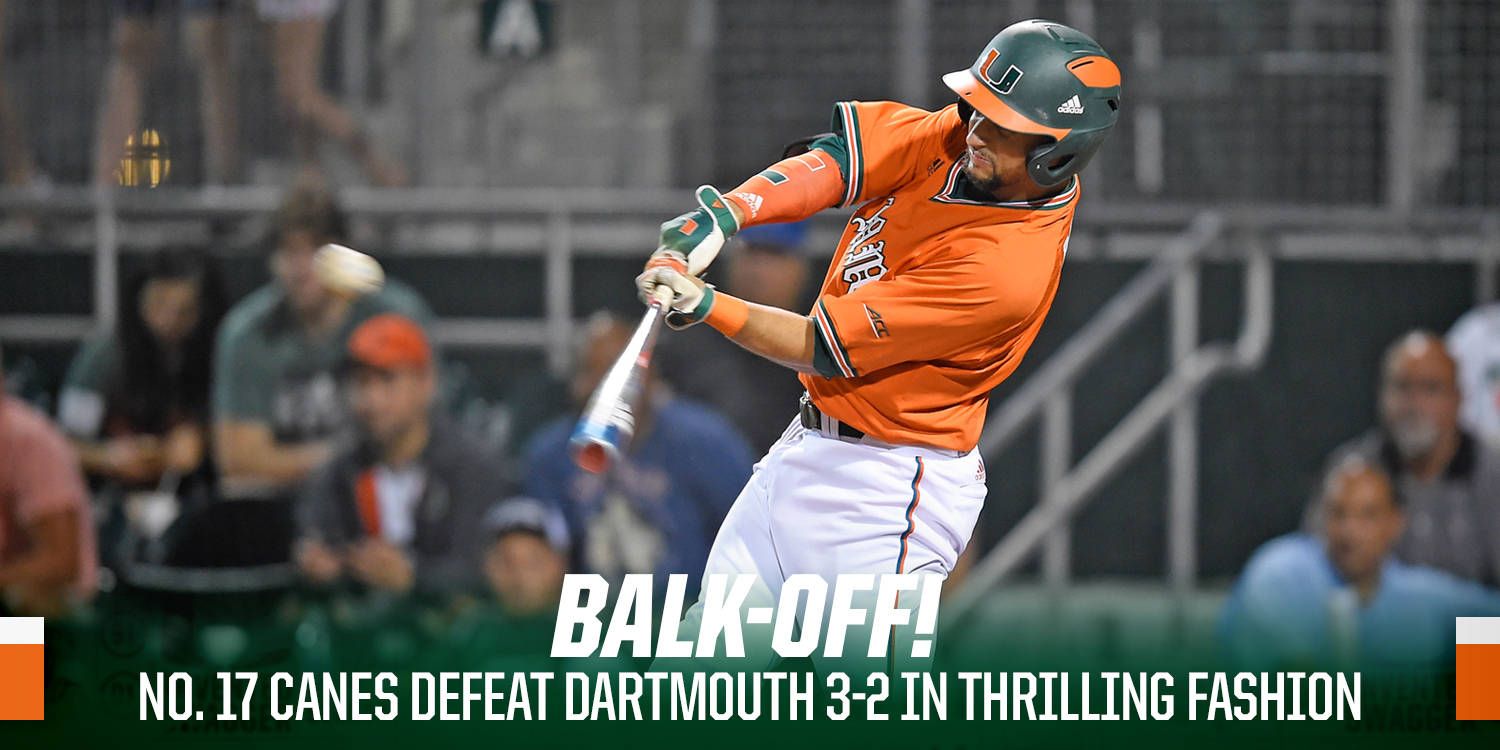 CORAL GABLES, Fla. – No. 17 Miami evened its series with visiting Dartmouth on a “balk-off” in the ninth inning Saturday night, as a wild ending to a 3-2 game at Alex Rodriguez Park at Mark Light Field set up a series rubber match.

Sophomore Romy Gonzalez, who opened the ninth with a single and advanced to second on a groundout, wound up on third base after a balk by Big Green righthander Patrick Peterson.

After an intentional walk to Christopher Barr set up a potential double play opportunity for Dartmouth, Peterson (0-1) balked again, scoring Gonzalez and sending the Hurricanes (4-5) into celebration.

Sophomore Frankie Bartow (1-0) pitched a scoreless ninth inning to pick up his first win of the season.

The two teams return to Mark Light Field Sunday at 12 p.m. for the series finale.

Gonzalez, who scored the winning run, finished 2-for-4 with two runs. Miami outhit the Big Green 8-6, as seven different Hurricanes recorded at least one hit in the victory.

The Hurricanes would not have had the opportunity for a late thrill ride if not for another standout showing on the hill. Junior lefthander Jeb Bargfeldt departed with a no-decision, but pitched six strong innings in his third Miami start.

Bargfeldt, who tossed his second straight quality start, tied a career-long with 6.0 innings. He struck out a career-best eight batters and scattered six hits.

Back-to-back solo home runs from Dartmouth’s Michael Ketchmark and Kyle Holbrook off Bargfeldt gave the Big Green a 2-0 lead in the fourth inning.

Miami looked poised to respond in the home half when senior Johnny Ruiz led off with his second ground-rule double in as many nights, but he was tagged out trying to take third on a flyout from junior Carl Chester.

The Hurricanes would not be discouraged, stringing together a game-tying, two-out rally.

A single by Gonzalez was followed by a walk from senior Edgar Michelangeli.

Dartmouth starter Cole O’Connor loaded the bases when he hit Barr with a pitch, and Miami senior Randy Batista – making just his second start of the season – capitalized with a two-RBI single to left to knot the contest, 2-2.

The Big Green (3-2) nearly regained the lead in the fifth when, with runners on the corners and just one out, Dustin Shirley lifted he ball to right for what looked like a go-ahead sacrifice fly.

But junior Michael Burns caught the ball on the run and made a perfect throw home to senior catcher Joe Gomez, who applied the tag to get Trevor Johnson for the final out of the inning. The play sent Bargfeldt and the 3,088 fans in attendance into a celebratory fist pump, as the score remained tied.

Bargfeldt would return for the sixth where he recorded two more punchouts, included a swinging strikeout of Dartmouth’s Hayden Rappoport on his 95th and final pitch of the outing.

O’Connor surrendered six hits and two runs in 4.0 innings. He struck out two and walked one before being relieved by Michael Parsons to start the fifth.

Freshman Albert Maury, Jr., pitched two scoreless innings of relief. He struck out two batters and walked two to keep Dartmouth off the scoreboard across a 30-pitch outing.