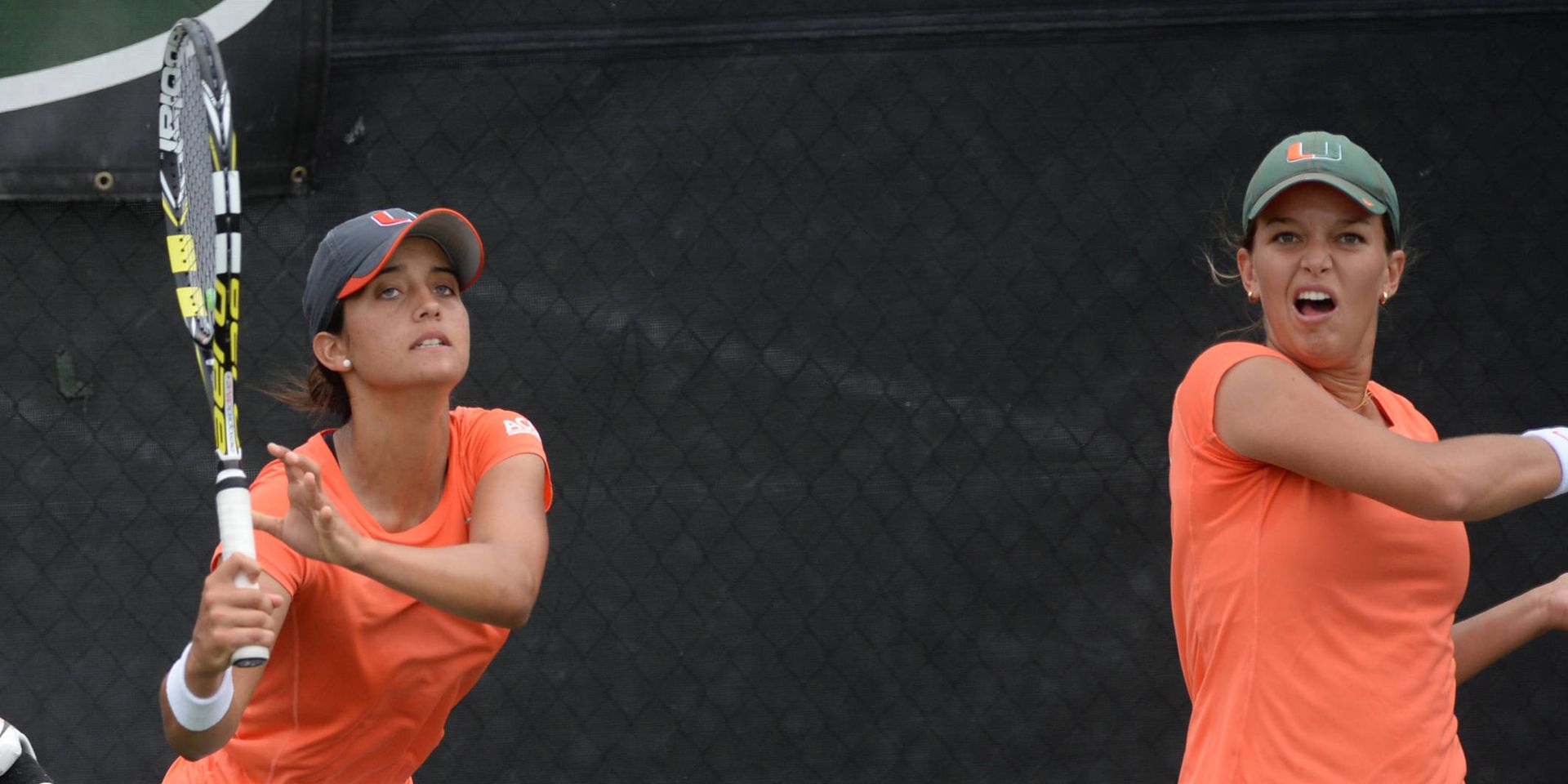 Doubles Pair Advances to NCAA Round of 16

ATHENS, Ga. – University of Miami’s 8th-ranked doubles team of Monique Albuquerque and Clementina Riobueno cruised past 19th-ranked Kate Fuller and Silvia Garcia of Georgia and into the NCAA Doubles Championship Round of 16.

In both sets the Hurricanes dropped the opening game, but followed up with four straight wins to take control of the match and down Georgia’s No. 2 doubles squad.

“That was some explosive tennis from Monique and Clementina,” head coach Paige Yaroshuk-Tews said. “If we continue to play at that level, we will do some damage in this tournament.”

While tied 1-1 in the opening set, Riobueno finished off the game in love with a volley to give the Canes a 2-1 that started the run of four straight games. The next game, the Hurricanes won in a long series of points that included four at deuce and three Miami advantages.

The Bulldogs stole a game to end the Miami run of wins, but the Canes followed up with two games—including three consecutive volleys from Riobueno at the net—to close out the first set.

After falling in the first game of the second frame, Riobueno sent a well-placed backhand into the alley to give Miami a 15-0 en route to winning the game in love—setting the scene for four consecutive Hurricane wins. Leading 3-1, Miami fought off a Georgia advantage to force the second deuce of the game before taking a 4-1 lead.

With a chance to close out the match while leading 5-1, Fuller and Garcia upped their game at the net and snuck in a win after leading the Canes 40-30.

The Hurricanes would close out the match in the next game with Albuquerque serving, and after trailing 15-0, took a 30-15 lead before securing their 21st win of the season. The win for Albuquerque and Riobueno also marked their seventh against ranked opponents.

With the win, the pair of Hurricanes advance to the Round of 16 on Friday, where they will face No. 10 Carol Zhao of Stanford at 3 p.m.

Every match remaining in the tournament can be watched live HERE. For more information on Albuquerque and Riobueno throughout the tournament, follow @HurricaneTennis on Twitter.