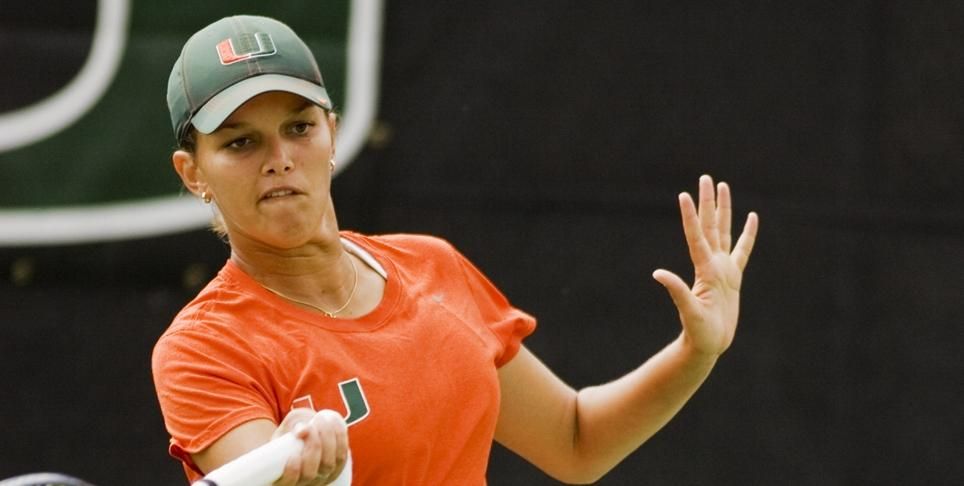 ATLANTA  –  With a 6-1 win at 32nd-ranked Georgia Tech, the No. 13 University of Miami women’s tennis team won its second straight Atlantic Coast Conference match and moved to 8-3 on the season.

The match was originally scheduled to be played outdoors, but was moved inside.

“We got better today as a program,” said Miami head coach Paige Yaroshuk-Tews. “We were put in an uncomfortable situation against this team inside.

“In my opinion I think they are a really effective indoor team.  They have some big servers and good first ball strikers and we responded really well.”

Once again, Clementina Riobueno clinched the win for the Canes. Currently ranked 91st in the nation in singles, the freshman cruised to a first set win over the Yellow Jackets’ Muriel Wacker, 6-3. Wacker would bounce back in the second set, taking a 5 games to 4 lead. However, Riobueno would force a tie-break, and then eventually pulled out the win, 7-6.

Miami’s first singles victory belonged to sophomore Monique Albuquerque. It was her first collegiate victory and she did it in straight sets over Megan Kurey, 6-1, 6-3.

“Monique played really well and looked more comfortable out there,” Yaroshuk-Tews said. “She had a good week of practice and it showed today.”

The Hurricanes’ third point came from the team’s highest ranked player, No. 74 Kelsey Laurente. The freshman breezed to a 6-1, 6-4 result over Georgia Tech’s 104th-ranked Kendal Woodard.

After Riobueno’s match clinching victory, the two teams decided to play out the remaining two matches. Miami’s most senior player, junior Melissa Bolivar battled to a 6-2, 7-6 win over Jasmine Minor. Lastly, another freshman, Stephanie Wagner closed out a three-setter against Muriel Wacker at No. 4 singles.  After claiming the first set, 7-5, Wagner was shut out in the second set, 0-6. However, the German battled back in the third and ended the match with a 7-5 third set victory.

“Steffi showed a lot of character,” said Yaroshuk-Tews. “She didn’t play her best tennis, but she found a way to get the job done.”

The Canes won doubles matches out of the Nos. 2 and 3 positions to earn the early 1-0 lead. Bolivar and Laurente teamed up for 9-7 victory at No. 2, while Riobueno and Albuquerque won, 8-5 at No. 3.

“Everyone else looked sharp and intense,” added Yaroshuk-Tews. “We had to fight as a program and we need to continue to build on this.”

The Hurricanes return to the court on March 22 when they travel to Texas to take on the Longhorns. On March 23, they will make the drive to Baylor before returning home on March 27 against Brown.