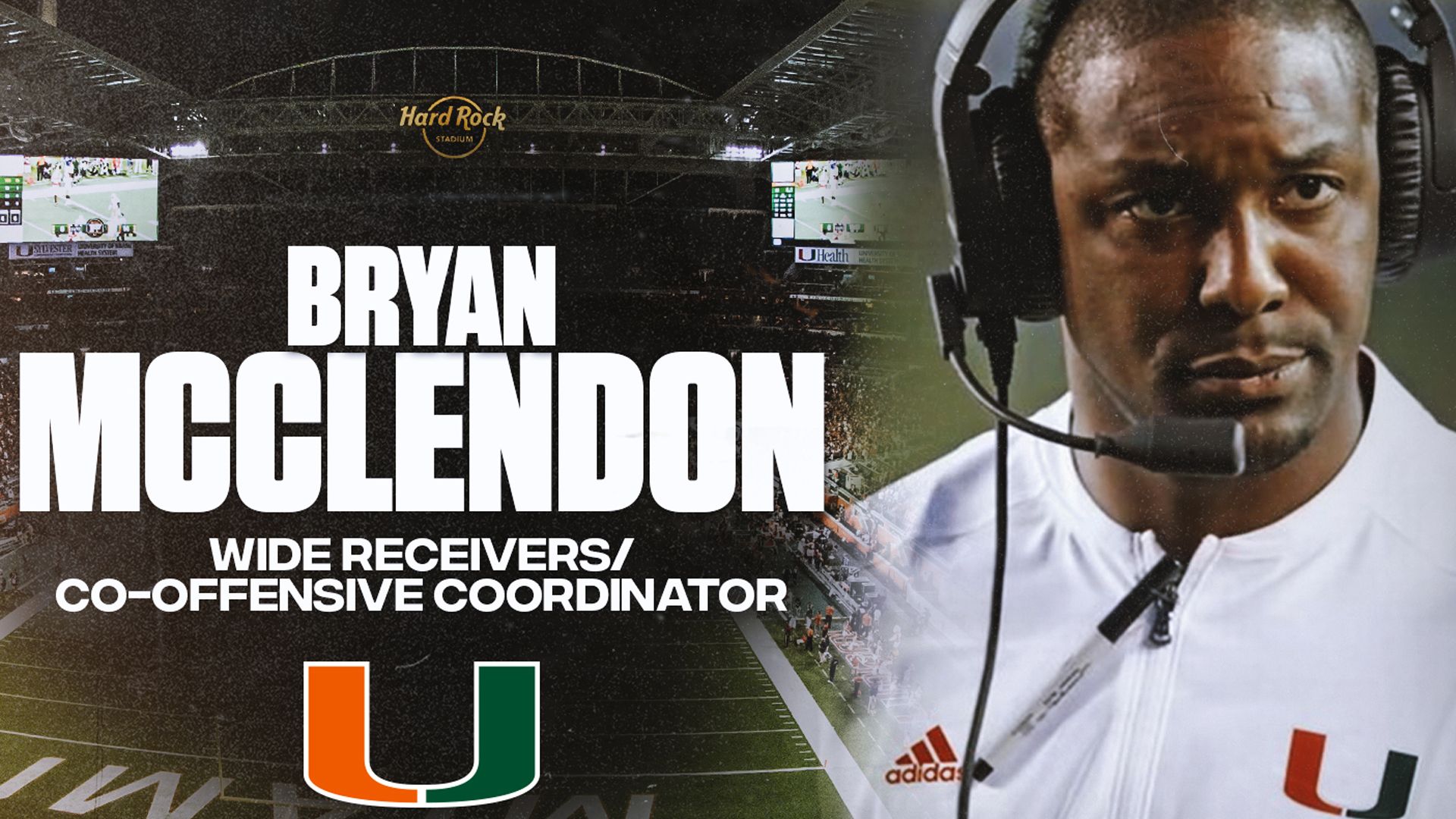 McClendon arrives in Miami after spending the previous two seasons working as wide receivers coach / pass game coordinator at the University of Oregon under Cristobal.  In his final season in Eugene, McClendon helped guide the Ducks to a 10-4 record, including a 7-2 mark in conference play, and its third straight appearance in the Pac-12 Championship Game.

“I’m fired up to have Bryan McClendon join our staff as wide receivers coach and co-offensive coordinator,” Cristobal said. “’B Mac’ is an elite football mind, coach and recruiter, and has exceptional acumen in the area of player development. Miami is a place that has always been known as ‘Wide Receiver U,’ and Bryan’s combination of passion and energy makes him the perfect candidate to help build on that reputation and elevate our program and culture to new heights.”

In his first season at Oregon in 2020, McClendon helped the Ducks to their second consecutive Pac-12 championship and a spot in the Fiesta Bowl. The Ducks finished fourth in scoring in the Pac-12 in 2020 and third in the conference in McClendon’s final year in 2021.

“I’m thrilled to be joining Coach Cristobal’s staff at the University of Miami,” McClendon said. “Having the chance to reunite with Coach Cristobal, co-coordinate an offense and lead a position room as prestigious as the one at The U presents a special opportunity and a challenge that my family and I are excited to take on together. We can’t wait to get started.”

Before his arrival at Oregon, McClendon spent the previous four seasons on the South Carolina Gamecocks staff, including the final two seasons as offensive coordinator and wide receivers coach.  A National Recruiter of the Year Award winner from 247Sports, McClendon helped take a youthful position room upon arrival in 2016 and turn it into one of the SEC’s strongest wideout groups.

2021 NFL Pro Bowl selection Deebo Samuel turned in a pair of strong seasons under McClendon’s guidance, highlighted by All-America honors in 2018 before being selected in the second round of the 2019 NFL Draft by the San Francisco 49ers. Samuel returned from a season-ending injury as a senior in 2018 to finish second in the SEC with 11 receiving TDs and was joined by junior Bryan Edwards to make up one of two duos in the SEC with 55-plus catches.

Named co-offensive coordinator and wide receivers coach when he was hired in 2016, McClendon made his play-calling debut for the Gamecocks in a 26-19 win over Michigan in the 2018 Outback Bowl. Weeks after the Outback Bowl win, McClendon was promoted to offensive coordinator and in the 2018 season, the Gamecocks averaged 30.1 points and 425.6 yards per game, good for the program’s most since 2014. South Carolina set a program record with five games of 500 yards or more of total offense, including back-to-back 600-yard performances against Chattanooga and at No. 1 Clemson.

In McClendon’s first year as offensive coordinator in 2018, quarterback Jake Bentley finished third in program history with 27 TD passes and fourth with 3,171 yards through the air while setting a new school record with five completions of 70 or more yards. Bentley set South Carolina single-game records for TD passes (5) and passing yards (510) at Clemson en route to becoming just the fourth SEC quarterback with 500 yards passing in a road game since 2000.

His four years in Columbia were preceded by nine seasons on the staff at Georgia, where he was part of 85 wins and a pair of SEC East titles.

Named the National Recruiter of the Year by 247Sports in 2014, McClendon was the running backs coach at Georgia for six seasons (2009 – 2014) before taking over the wide receivers room in 2015 while serving as passing game coordinator. He was also Georgia’s recruiting coordinator the last two seasons and was the program’s interim head coach during the 2015 TaxSlayer Bowl win over Penn State.

From 2009-15 when McClendon was a full-time member of the staff, the Bulldogs averaged 33.4 points per game, which was the second most in the SEC over that seven-year span. McClendon was part of Georgia’s staff that helped the Bulldogs lead the SEC in scoring offense (41.3) in 2014 for just the third time since 1982, highlighted by 44.3 points per game in four SEC road contests.

McClendon’s running backs room was crowded with future NFL stars in 2014, as Georgia went on to lead the SEC in rushing for the first time since 1992 with 3,352 yards and 38 TDs, which ranked second and third most, respectively, in program history. Despite starting just eight games, Nick Chubb finished second in the SEC in rushing (1,547 yards) and was named the SEC Freshman of the Year. Chubb and Todd Gurley (911 yards in six games) gave Georgia one of five FBS running back duos with over 900 yards rushing in 2014, while Sony Michel rushed for 410 yards on just 64 carries.

From 2011-14, the Bulldogs put together four of the top six seasons in program history in total offense and three of the top five seasons for total TDs. McClendon was promoted to the post of running backs coach in 2009. He recruited and developed some of the nation’s best running backs over his five seasons, including Gurley, Chubb, Michel and Isaiah Crowell.

McClendon began his coaching career with a two-year stint as an offensive graduate assistant on the Georgia staff from 2007-08.

McClendon was a four-year letterman at Georgia, where he graduated in 2005. His senior class won 44 games, which was the most by any class in Georgia history at the time of his graduation. During his tenure, the Bulldogs won three SEC Eastern Division titles, two SEC championships and played in four bowl games, winning three of them.

McClendon and his wife, Amber, have three children: Bryan, Brooke and Brayden.