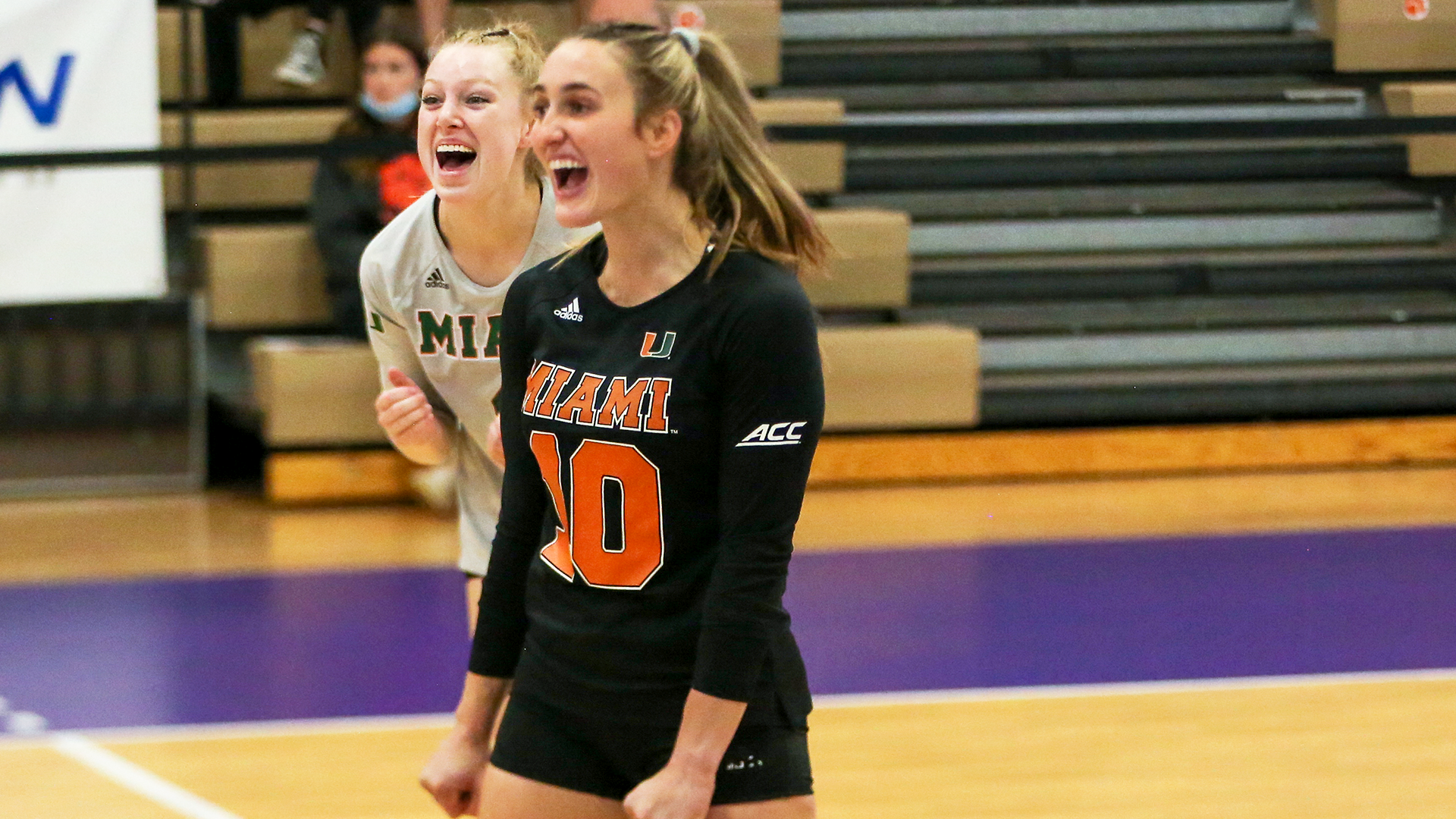 CLEMSON, S.C. – The University of Miami volleyball team put on a blocking clinic as it cruised to its 15th sweep of the season against Clemson on Sunday afternoon inside Jervey Gymnasium.

The sweep marks the most in a season since 2011 when the Hurricanes finished the year with 15 sweeps. With the win, UM remains perfect on Sunday’s this season with a 24-0 set record and 8-0 match record.

“This feels like a story that isn’t quite finished yet. The sequel is next Saturday,” said head coach Jose “Keno” Gandara. “Last season, we got to play teams back-to-back in the fall, and I really enjoyed the tactical battle that went on between matches. Now we get to do the same thing but with a whole week of training in between. I have a lot of respect for Jackie [Simpson Kirr] – they beat us last year on the first night – so I’d imagine they’ll have some changes on their side that we’ll have to prepare for.”

For the ninth time this season, the Hurricanes recorded double-digit blocks in a match after tallying 15 in the win to match the season high mark. The duo of Janice Leao and Peyman Yardimci each recorded six blocks, while Aristea Tontai totaled five.

“I thought it was a really cool match for Janice,” Gandara added. “She started off a little quiet and she’s had a tendency in the past to get a little internal and hard on herself. But you look at the box score and she hit .368 and stuffed six balls. She’s growing up in real time and I hope she’s really proud of the player she’s becoming.”

Savannah Vach registered her seventh double-double of the year with a match-best 32 assists and 11 digs. The junior setter added in three blocks and an ace.

Coming off the bench, Emily Damon served up two critical aces to go along with six digs.

“Special shout out to Emily,” Gandara said. “Her serve has been a battle for her for her entire career and she had an excellent day back there this afternoon. That’s the stuff that fans don’t see – the days and weeks and years of struggle. It’s been a grind for her, so the serving performance today was extra special.”

Angela Grieve led all hitters with 12 kills for a .276 attacking percentage.

A 3-0 run to start the match and six first set blocks paced the Hurricanes in the opening set. Hanna Bissler served up an ace, extending the Miami lead to four, 15-11, at the media timeout. An attacking error by the Tigers pushed the Canes lead to five, 21-16, and forced Clemson to use its second timeout. Miami held on to earn the 25-20 opening frame win.

After falling behind early, 8-6, it was all Miami from there. Grieve registered two kills and a block that was part of a 4-0 Canes run which led to a Tigers timeout with Miami up, 10-8. Following the break, the Hurricanes allowed just six more points as it cruised to the dominating 25-14 second set victory.

Miami’s dominance continued into the third set, hitting an astounding .458 for the frame. Despite going down 3-0 to begin the set, the Hurricanes responded as they regained the advantage at 7-6 and never took their foot off the gas on the way to the 25-15 win.

Next, the Hurricanes return to the Knight Sports Complex on Nov. 13 at 5 p.m. to host Clemson in the second of back-to-back meetings for the teams.