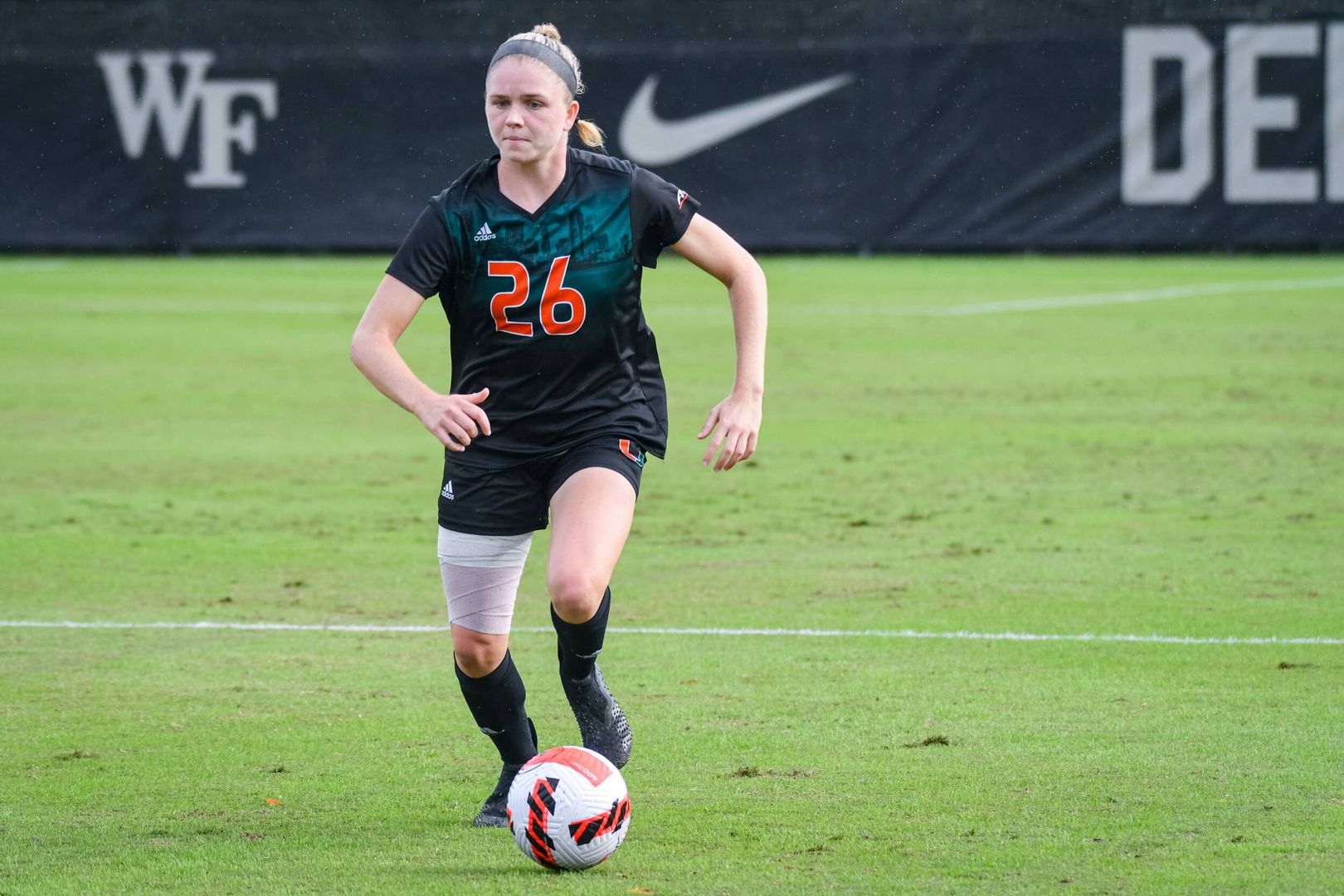 After conceding a goal in the opening minutes of Thursday’s match, the Hurricanes battled until the final horn. Junior defender Emma Tucker leveled the contest in the 89th minute, forcing extra time.

Miami pushed the Wake Forest Demon Deacons to double overtime, but the Demon Deacons scored the golden goal in the extra session to win, 2-1, at Spry Stadium.

“I’m proud of the effort and relentlessness. I thought the composure was very good. I think this was one of the best performances we’ve put forward,” Miami head coach Sarah Barnes said. “In soccer, sometimes things don’t bounce your way. Regardless, the performance was a step in the right direction. We played pretty well last week but I thought we played a little bit better this week. My heart hurts for the players but I’m really proud of what they left on the field tonight.”

The Hurricanes (4-7, 1-4 ACC) scored in the final second to defeat Boston College Saturday, and five days later, found a spark of that same late magic once again.

Tucker freed herself from the Demon Deacon defense and curled a right-footed ball into the corner of the net. The tally marked Tucker’s first since her freshman season against Farleigh Dickinson on Aug. 25, 2019.

Earlier in the match, Tucker registered Miami’s first shot of the night, bending a ball on target but Wake Forest goalie Mia Raben made the stop.

Wake Forest (11-2, 3-2 ACC) nearly doubled its tally in the 64th minute. The Demon Deacons drew a foul inside the box and the referee awarded a penalty kick.

Sophomore midfielder Sophie Faircloth stepped up to the spot, but Miami junior goalkeeper Melissa Dagenais answered the call. The reigning ACC Co-Defensive Player of the Week sprawled to her left, pushing the penalty shot away. Dagenais finished with seven saves, one shy of her season-high.

A few minutes later, the Hurricanes went on the offensive. Taylor Shell created space for herself and drove into the Deacons’ box. Shell’s attempt clanged off the crossbar, coming inches away from delivering the equalizer. Shell came even closer five minutes later, ripping a shot off both the crossbar and post that landed just in front of the goal line.

“I felt like we could’ve had a goal or two earlier,” Barnes said. “We had several opportunities. We had control of the game in the second half. We all felt that we were going to get one. The players were saying to each other, ‘it’s coming.’ I definitely felt like it was within reach.”

Wake Forest got in the scoring column behind Jenna Menta’s strike two minutes and four seconds in. Redshirt senior midfielder Sofia Rossi recorded the golden goal in the 101st minute.

Up next, the Hurricanes conclude their three-match road trip Sunday against No. 1 Florida State. Kickoff is set for 12 p.m. and will air on Regional Sports Network.