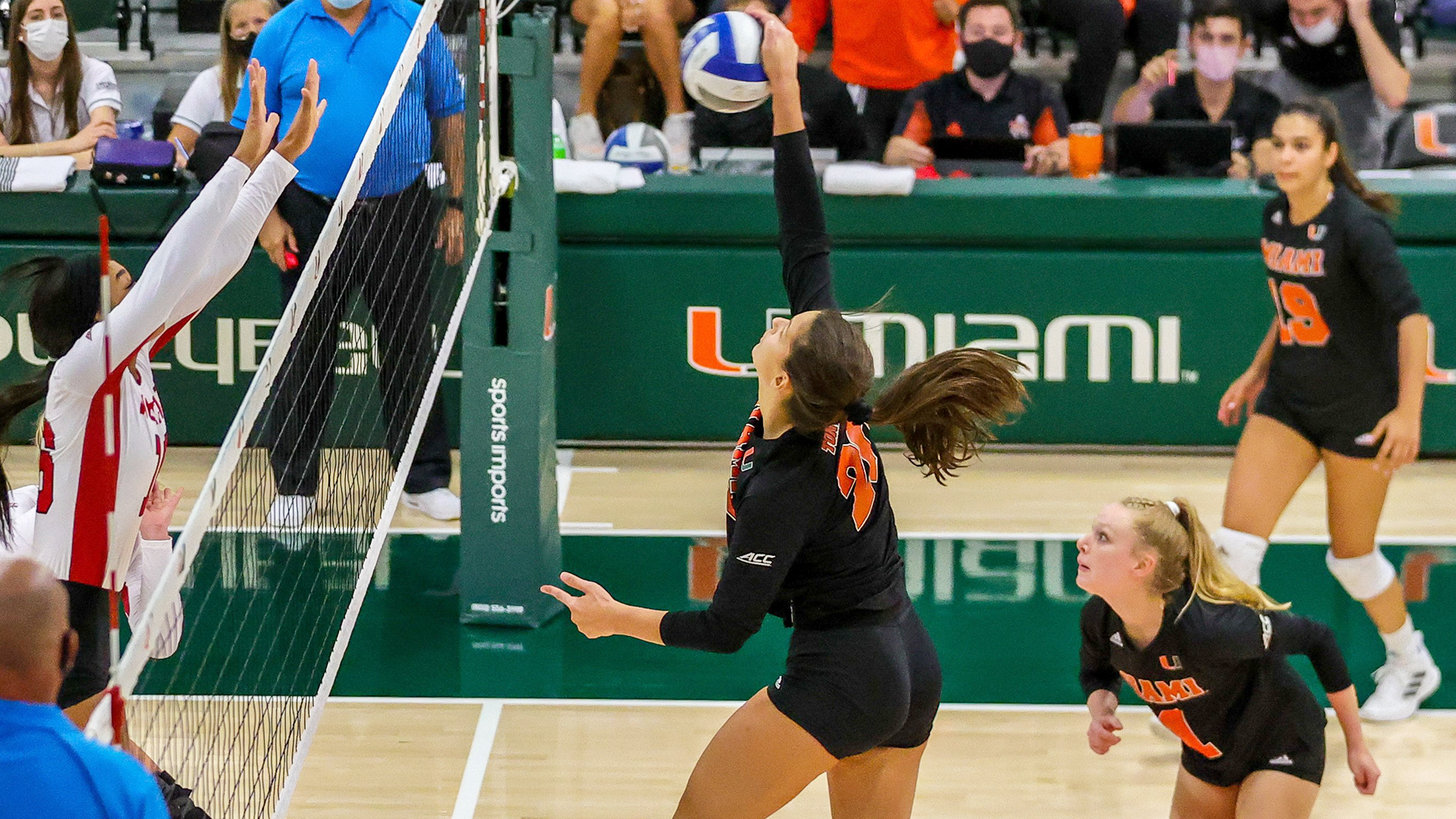 CORAL GABLES, Fla. – The University of Miami volleyball team capped off its weekend with a sweep over NC State on Sunday afternoon in the Knight Sports Complex.

The sweep marks the 10th match sweep in 12 wins for UM this season. This marks the Canes best 14-game start since the 2011 season when they went 13-1, and best under head coach Jose “Keno” Gandara.

It was a clinic along the net for Miami as it recorded a season-high 15 blocks in the win.

“It’s been a long time since we’ve blocked at this level,” said Gandar. “Janice [Leao] and Aristea [Tontai] did a wonderful job tonight and I think we’ll be at or near the top of the conference in blocks per set after this weekend. Both UNC and NC State had some unbelievable arms on the pins. We don’t see heat like that in our gym, so I think it overwhelmed our diggers a bit. That just made blocking crucial, and we were really good for long stretches.

“Savannah [Vach] was excellent again. The old joke about death and taxes applies to her. Her preparation, toughness, and intelligence are elite. Her physical tools never leave anyone overly impressed, but I’ll take her over any setter in our conference. She was magnificent.”

Savannah Vach notched her fifth double-double of the year with 39 assists and 13 digs. The junior setter added in five blocks and two kills.

Graduate transfer Aristea Tontai found her groove early, tallying a team-leading five kills in the first set to finish with 12 on 13 attacks to hit .923. Tontai totaled six blocks on the afternoon.

Angela Grieve finished the match with 11 kills, a dig, and two blocks. For the third straight game, Janice Leao notched eight or more blocks with nine. She contributed eight kills and two digs in the win along with her nine blocks.

Miami took an early 5-4 lead that was followed with a 6-1 Wolfpack run to force a timeout by UM. Trailing by four, 14-10, Tontai ignited an 8-2 run for the Canes with a kill and three straight blocks on the pin with Peyman Yardimci and Nyah Anderson to draw the game even to give Miami the 18-16 lead as NC State was forced to use its final timeout. The teams traded back-to-back-to-back two-point runs, knotting the game at 20 a side. The Wolfpack battled off two straight Miami set points and eventually send the match past 25. As the teams traded punches, it was UM prevailing with the 32-30 win following back-to-back kills from Tontai and Yardimci.

Hanna Bissler started the third set off just like set one, with an ace to push a 4-0 Miami run to open the set. Following an early first timeout for NC State, it responded with a 5-0 run and quickly jump in front, 5-4. It was the Wolfpack using a 4-1 run to take a 12-11 lead, which was answered with a 4-1 Canes run of their own and gain the advantage, 15-13. Miami never fell behind again as it went on to win the set 25-19.

The Hurricanes wrap up their three-game homestand with in-state rival Florida State on Oct. 6 at 8 p.m. in the Knight Sports Complex.