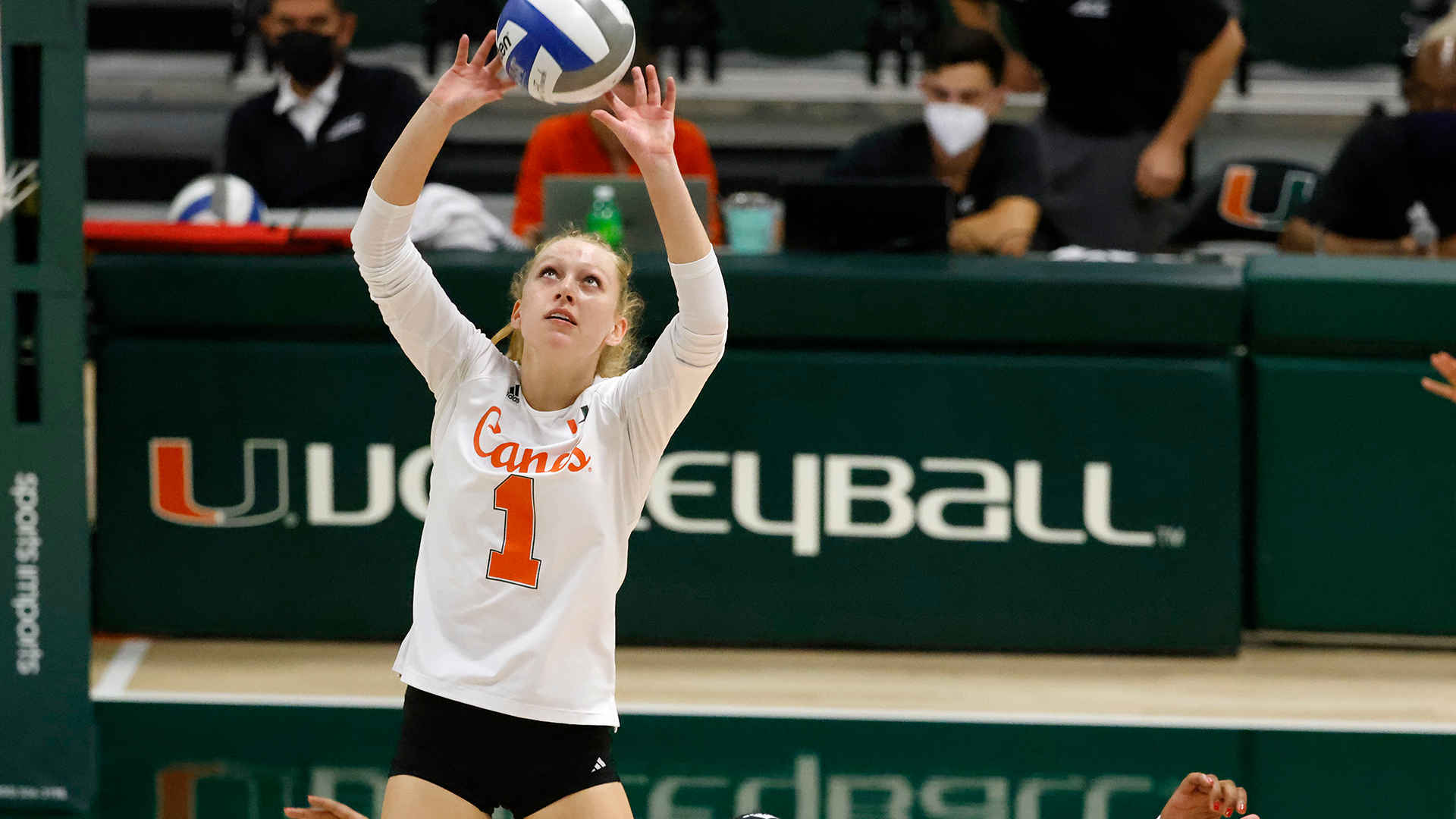 SOUTH BEND, Ind. – Junior Savannah Vach tabbed her third double-double of the season to lead the University of Miami volleyball team to a sweep over Notre Dame on Sunday afternoon inside the Purcell Pavilion at the Joyce.

The sweep marks the ninth of the season for the Hurricanes in 10 wins. Miami improves to 10-2 on the season and 1-1 in the ACC.

“I’m always curious to see how teams respond at getting beat badly, which we did on Friday,” said head coach Jose “Keno” Gandara. “As I’ve mentioned before, this group is pretty resilient. Within an hour of that loss to Louisville, we had a bunch of girls on their laptops, charting Notre Dame. There’s no rest for the weary in the ACC this year, so the ability to move on and keep preparing is critical. We were prepared and earned the right to win today.

“It’s been the case most of the season, but our block defense was what carried us. We stuffed a bunch of balls, defended well around the block, and then there probably isn’t a superlative big enough to describe Angela Grieve’s performance tonight. We have a drill called composure that we do every day and it’s all about not making bad errors. One error tonight for Angie – as you can imagine, she wins that drill often.”

Vach recorded her third double-double this season with a game-high 31 assists and 14 digs. She added a season-high four blocks, three aces, and a kill to the afternoon.

Janice Leao notched a season-high eight blocks in the win along with nine kills and three digs. Angela Grieve tied her season-high mark of 16 kills to go with four digs and three blocks.

Notre Dame took three of the four opening points of the set, though Miami responded with back-to-back kills from Leao and Grieve to spark a 5-0 run to put the Hurricanes on top 6-3. In a tightly contested opening set, neither team was able to gain a strong lead as they went to the media timeout with the Fighting Irish up by just one, 15-14. A 3-1 Notre Dame run forced UM to use its first timeout following the media break. The Canes surged to a 9-2 run down the stretch, which included a stretch of three straight blocks by Miami, to win the set 25-21.

Leao was responsible for four of UM’s opening eight points in the second set as the Fighting Irish used their first timeout with the Canes holding an 8-5 lead. Notre Dame pulled within one at 11-10 but the Canes opened the set wide open with a 7-1 run, extending its lead to 18-11. Behind a .297 attacking percentage, UM cruised to the 25-15 set two victory.

Four different Canes – Vach, Nyah Anderson, Grieve, and Leao – all recorded a kill as Miami opened the third set on a 6-2 run to force Notre Dame to use an early timeout. Once again, the Fighting Irish remained within striking distance of the Canes as they pulled within one on four separate occasions in the middle of the set and eventually tying the set at 20-20. In a first to five scenario, Miami prevailed with the 25-22 set win for the sweep.

The Hurricanes return the Knight Sports Complex on Oct. 1 at 8 pm (ET) to host their first conference home game against North Carolina.