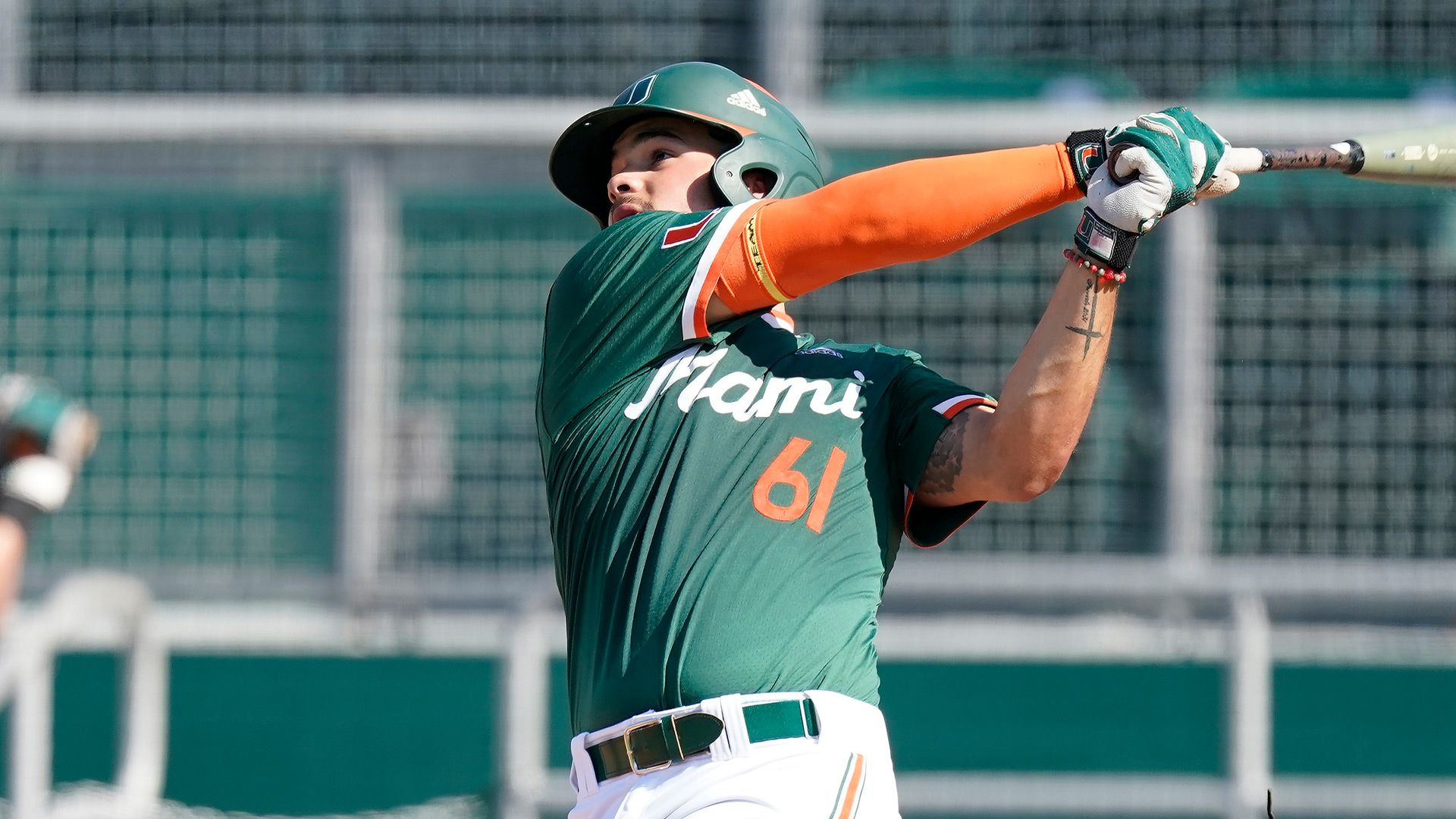 Miami Falls in Finale at BC

BRIGHTON, Mass. – A seven-run deficit proved too much to overcome, as Miami dropped the series finale at Boston College.

“We’ve got to continue to play,” head coach Gino DiMare said. “We’ve got three more weekends to play and then the ACC tournament. We are absolutely not playing the way the game needs to be played. If we’re going to be successful here, we’ve got to do a better job in all phases.”

Boston College (19-22, 8-19 ACC) got off to a good start in Sunday’s series finale, as top prospect Sal Frelick led off the game with a triple and scored on an RBI single from second baseman Cody Morissette.

The Eagles opened the bottom of the second with three consecutive singles and all three players came around to score in what was a six-run second inning that Miami starter Jake Garland could not complete. The right-hander was replaced on the mound with two outs and a runner on second in favor of right-hander Jake Smith.

Miami got on the scoreboard in the top of the third, as true freshman Carlos Perez led off the inning with his first career homer.

The blast was the first hit by a Hurricane on Sunday and sparked a five-run third inning against BC Starter Alex Stiegler. Yohandy Morales drove in a pair with a single to center and Raymond Gil’s two-run double off the wall in center brought Miami within two, 7-5.

“Offensively, we’ve got to be better throughout the lineup from one through nine,” DiMare said. “We’re just having lulls where we don’t do a whole lot in the middle part of the game and we’ve got to find a lineup. We’re still searching; we’re still messing around with our lineup a little bit. We changed it today.”

BC struggled early against Smith, with the right-hander fanning the first four batters he faced, but the Eagles plated a pair of runs when Luke Gold hit a hanging breaking ball for a two-out, two-run homer to left that gave Boston College a four-run advantage.

“We got it back to a two-run game and momentum was back on our side,” DiMare said. “Then we gave up a two-run home run there. They continued to score some runs and we didn’t. Obviously, the big number there is the six spot in the second inning.”

Perez had another big hit for Miami, leading off the top of the sixth with a triple to left. The freshman catcher scored on an RBI groundout by Jordan Lala that cut the BC lead to three runs. But the Eagles got the run back when Gold smacked an RBI triple in the bottom of the sixth to make it 10-6.

Boston College added its last run in the eighth, as Gold doubled home Frelick to bring the Eagles lead back to five runs.

“At the end of the day this team has not been consistent, that’s the bottom line,” DiMare said. “We’ve been inconsistent and if we continue to be inconsistent, it won’t be a long stretch for us. We’ve got to find a way to be consistent.”

Miami is back in action next weekend, hosting Appalachian State in a three-game series set to begin Friday night at 7 p.m.