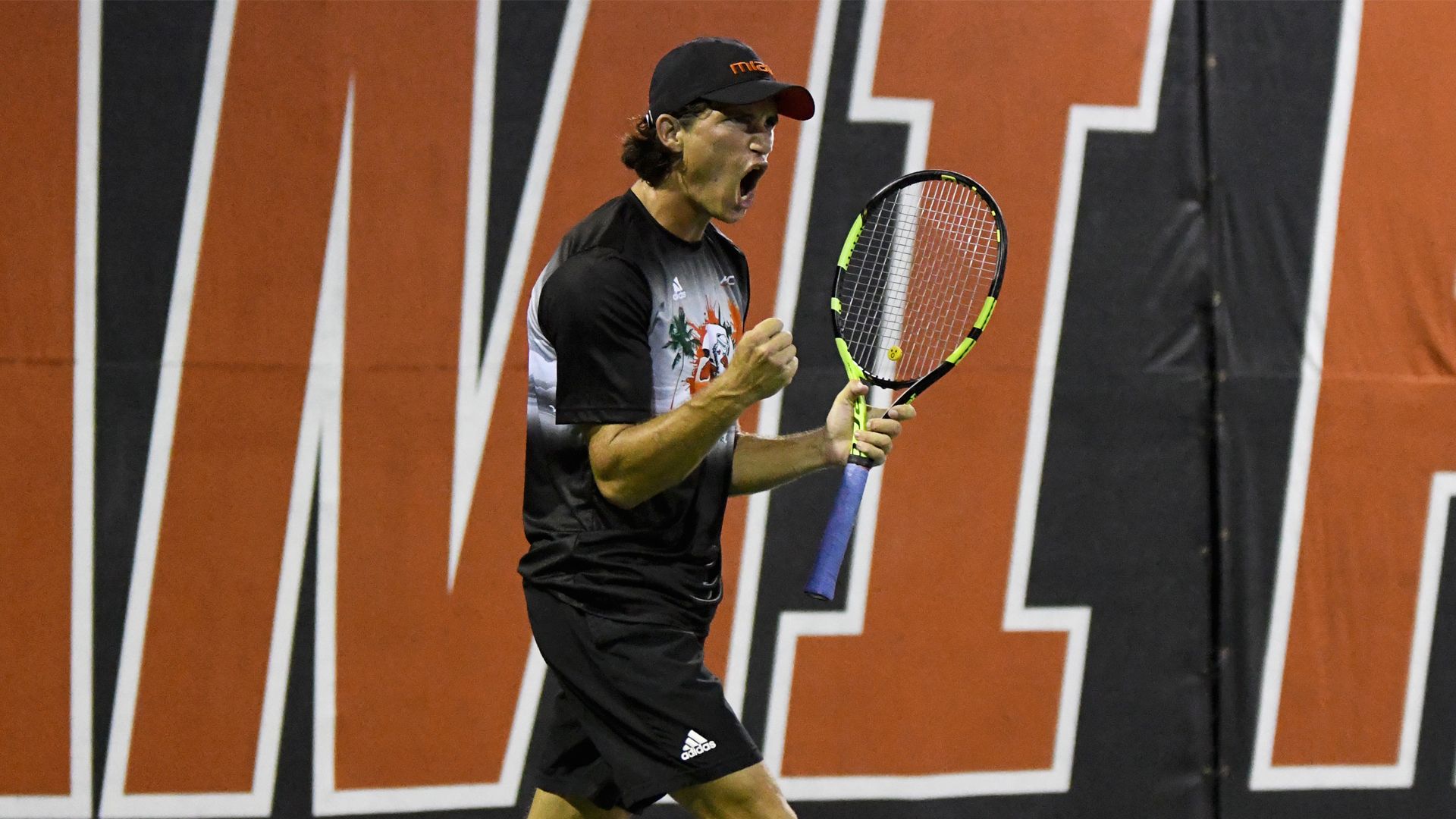 TALLAHASSEE, Fla. – Under the lights at the Scott Speicher Memorial Tennis Center, the University of Miami men’s tennis team did not skip a beat in its first match in 19 days.

“I am proud of them. I am really proud of them. We are a resilient group,” Miami head coach Aljosa Piric said. “We have had a rough season with ups and downs, but we have continued to grow. We have continued to believe we are a good team and we are a good team. So, yeah, this is awesome for them. I am really happy for them and we have got to ride this. We have to see how good we can be the rest of the year. We have five matches coming up and we have got to go for it. These guys are ready and I am just so proud of them.”

No. 45/46 Miami (5-7, 3-4 ACC) got off to a slow start in doubles, competing for the first time in nearly three weeks due to positive COVID-19 tests, subsequent quarantining and contact tracing within the program. However, the Hurricanes battled back on all three courts to secure the advantageous doubles point.

Trailing 1-3 in a top-75 doubles matchup, No. 31 Franco Aubone and Benjamin Hannestad garnered the final five games to defeat No. 73 Marcus Walters and Loris Pourroy, 6-3.

Meanwhile, competing together for the first time, Bojan Jankulosvki and Stefan Milicevic would not be denied against Chase Wood and Andreja Petrovic, sealing the doubles point with a 6-4 triumph.

Down 2-5 on court 2, Adria Soriano Barrera and Oren Vasser rallied back and tied things up against Sebastian Arcila and Alex Knaff, 5-5, when the point was clinched.

“The doubles point was key. We came out ready to compete,” Piric said. “We have had a rough couple weeks now with COVID, but right before we came out tonight we said, ‘No excuses. Come out, compete and find a way to win.’ And doubles was the catalyst for us. We were down a couple break points on two courts, we came back and turned them around. And once that went our way, we started to believe we could play well.

“Credit to Boki at 2, he beat a really good player after not playing for a couple weeks, I am really proud of him,” Piric continued. “And [I am] proud of Adri who also beat a very good player. And Benji [of course] closing it out. He has had a tough season, but came through for us in the biggest match of the year.”

Blazing through the opening set, 6-1, Jankulovski fended off a late rally by Knaff and earned a break on a deuce point to secure the second point of the match, 6-1, 7-5.

Most recently rising to No. 27 in the nation, Soriano Barrera moved Miami a point away from clinching the team victory, besting Pourroy in three sets, 6-4, 2-6, 6-2.

However, the Seminoles once again clawed themselves back into the match when Arcila defeated Milicevic, 6-4, 7-5.

Overcoming a 4-6 opening set defeat, Hannestad cruised in the second, 6-3, to force a third against Richard Thongoana.

“I mean listen. Winning solves a lot of problems. That has just been my experience,” Piric said. “You can be working on a lot of things, putting in the hours on the practice courts. But, a win like this for Benji saves us probably a month of time. I know that the guys are going to enjoy this, we are going to enjoy this tonight. We are going to go back home tomorrow to practice, get ready to play Boston College and we are going to be excited to go. This has been two tough wins for us in a row–South Florida two weeks ago and then Florida State tonight. We are really excited and we believe we can finish this season strong.”

In the lone unfinished match, Vasser was moments away from clinching on court 5, maintaining a 7-5, 6-6 (5-1) advantage against Petrovic.

Up next, the Hurricanes will return to the Neil Schiff Tennis Center to take on Boston College Sunday at 1 p.m. In between doubles and singles, Miami will honor five seniors for senior day on its home court.