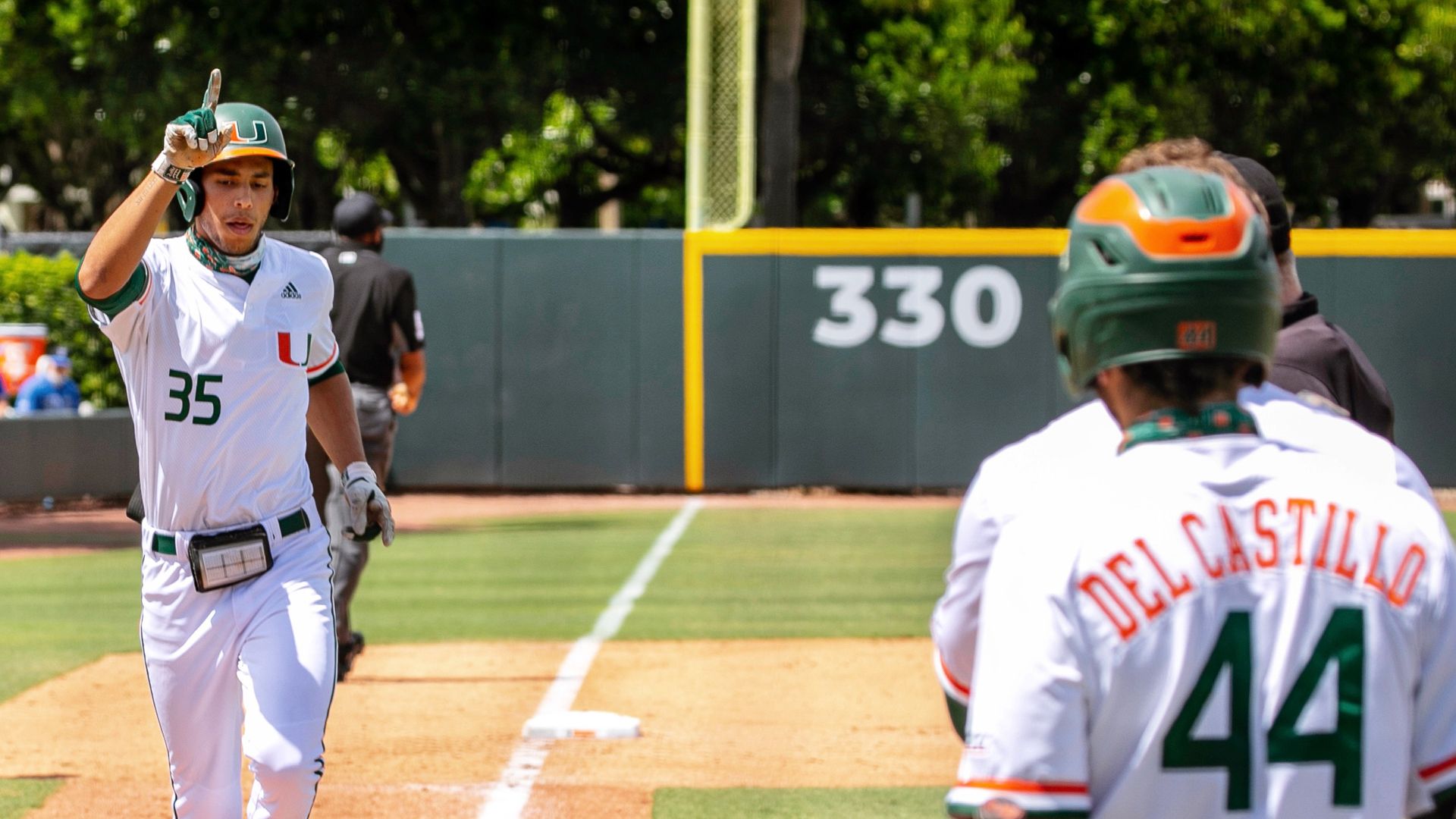 CORAL GABLES, Fla. – The Hurricanes closed out their first three-game sweep of the 2021 season, dropping Duke for the third straight day.

“It’s our first sweep of the season, three-game sweep, and it sure feels good,” head coach Gino DiMare said. “Much needed because we talked about where we put ourselves after a couple weeks ago with us getting swept and, of course, we lost the series earlier on. We’ve got some catching up to do and just winning two out of three and winning the series isn’t going to be good enough. When we have a chance, we got to try to get the sweep. We’ve got to get ourselves back into position where we want to be at the end. I just thought it was a great complete game.”

Duke (11-13, 5-10 ACC) struck first, hitting a pair of doubles in the top of the fifth to get a run home. Michael Rothenberg led off the inning with a double to center and scored when Chase Cheek hit a two-out RBI double to right that gave the Blue Devils a 1-0 lead.

But Miami responded with a three-run inning capped by a two-out, two-run homer off the bat of third baseman Yohandy Morales. The freshman hit his team-leading sixth homer, putting Miami ahead, 3-1.

“We’re feeling good after this sweep, but we’re never satisfied with what we’re doing,” Morales said. “We always want to keep pushing ourselves and try to win every game possible. We’re not done right now. We’ve got to keep going and keep winning games keep sweeping teams.”

Hurricanes starter Jordan Dubberly turned in the best start of his young Miami career, allowing just one run on four hits over a career-high 5.0 innings pitched. The right-hander fooled Blue Devil hitters all afternoon, setting a new career-high with seven strikeouts while walking just two batters. Dubberly credits his command with helping him miss so many bats on Sunday.

“Locating and doing a good job of making pitches where I need to,” Dubberly said. “Not having a super overpowering fastball or anything like that makes it a lot more important to locate. That definitely played the biggest part in helping me get a few strikeouts today.”

Dubberly walked the first two batters of the sixth before being replaced by Anthony Arguelles on the mound. The right-handed reliever struck out a pair of Blue Devils to get out of a bases-loaded jam unscathed and keep Miami’s two-run lead intact.

“It’s very rewarding,” Dubberly said of his first win. “I’ve got to thank God for allowing me to be here. It’s really a team win. Without Anthony Arguelles coming in there after me after that rough start to the sixth inning, it wouldn’t be the same result. So, him coming in behind me and, of course, Carson Palmquist finishing out the game and such great defense behind me, it’s a great team win, and it’s very rewarding.”

With a three-run lead and six outs to go, DiMare turned to closer Carson Palmquist and the lefty did not disappoint. Palmquist struck out the side in order in the eighth and the Miami bats made his job easier by scoring four runs in the bottom of the inning to take a 7-1 lead. The lefty fanned two more batters in the ninth to secure his national-leading ninth save of the season.

“We knew if we can get to the eighth, he was going to throw two innings because he doesn’t throw a lot of pitches,” DiMare said. “He pounds the strike zone so he doesn’t throw a lot of pitches. That was great to see and really happy to see us add on at the end there and not get complacent with Carson coming in the game. Putting four runs in the eighth inning, that was big.”

The Canes are back in action Wednesday, hosting crosstown foe FIU in a game slated for a 7 p.m. first pitch.