“Kelsey is a south Florida native and it was huge when she picked us,” head coach Katie Meier said. “I was really hard on Kelsey after the last game, but she regrouped and bounced back today. That shot was such a huge shot, so I was really proud of her. She came through for us today.”

For the second straight game, Marshall led the Canes in scoring and knocked down four shots from beyond the arc. Fellow senior guard Endia Banks recorded her third double-digit outing in the last four games with 14 points in the contest.

As a team, the Canes dished a season-high 19 assists, the most by a Miami team since tallying 20 against Miami (OH) on Nov. 20, 2019. Banks paced the Canes with an eight-assist outing, tying her career-high in dishes.

It was a low-scoring affair through the first five minutes of action as neither team could capitalize on their offensive opportunities. The Tar Heels found their rhythm in the final two minutes of the frame, embarking on a 10-0 run to take a 16-7 lead. Banks put a stop to the run with a layup as time expired in the quarter to cut the UNC lead to seven.

The Canes battled back into the game thanks to five straight points from Banks, but the Tar Heels responded with an 11-2 run to stretch their lead back to nine. Following the UNC run, the Miami defense locked down, keeping the Tar Heels scoreless for the final two minutes of the half. Meanwhile, the Canes knocked down three straight 3-pointers to tie the game at 30 heading into halftime.

The Canes took over in the third quarter shooting 59 percent from the field in the frame and outscoring the Tar Heels 24-13. Redshirt junior Destiny Harden found her groove, posting seven of her eight points in the third frame on 3-of-4 shooting. Miami closed the quarter on an 8-2 run to take a double-digit lead into the final 10 minutes.

Marshall continued to dominate in the fourth quarter, pouring in eight points, including a 3-pointer at the 6:51 mark. With the three at 6:51, Marshall became the 29th Cane in program history to reach 1,000 career points. Miami sunk 7-of-11 free throws in the closing minutes of the game to hold on for the 69-59 victory. 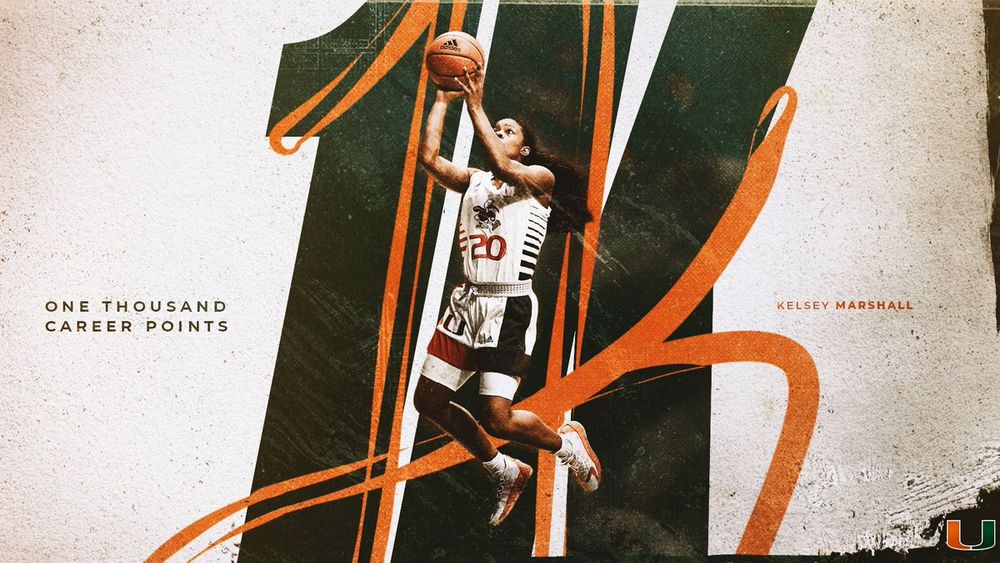