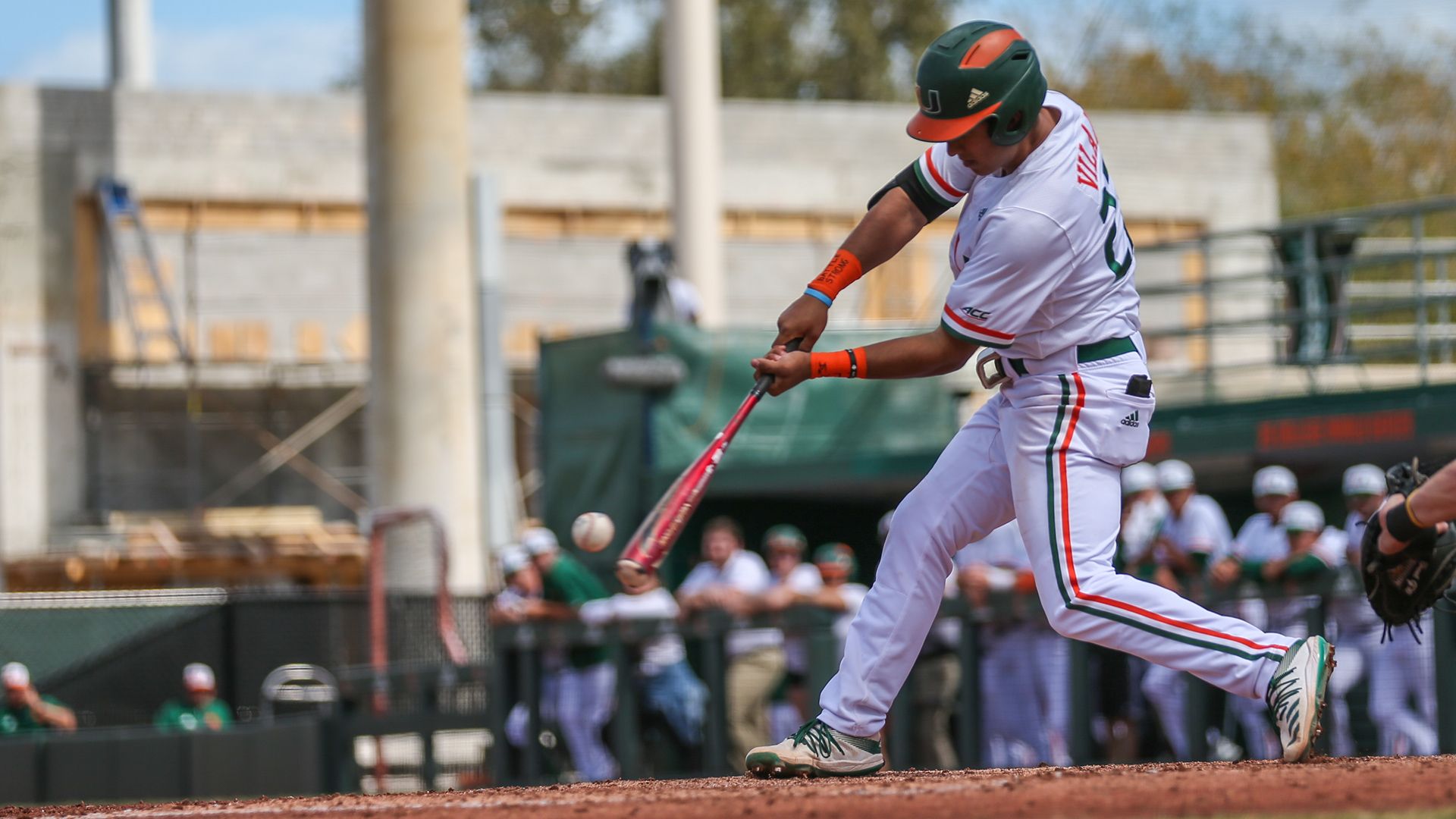 A resilient Towson (2-7) ball club battled to tie the game with a three-run fifth. But Anthony Vilar’s two-run single punctuated a five-run sixth inning that helped the Canes (8-3) pull away and secure their second sweep of the season.

“All in all, just a good, solid performance,” Miami head coach Gino DiMare said. “Of course, the sixth inning being the big inning right there. It all started with a sac bunt with first and second and nobody out. We bunted and they didn’t defend it and we got the bases loaded and just got some hits going there, so that was huge for us.”

Miami got its offense going early against Towson lefty Tyler Russo, as Vilar singled home Jordan Lala to put the Hurricanes on the scoreboard after just six pitches. The Canes doubled their lead two batters later, as Adrian Del Castillo’s single to center drove in his 10th RBI of the year and gave Miami a 2-0 advantage after one inning of play.

Towson rallied in the top of the fifth, stringing together three hits against Miami starter Slade Cecconi. After a double steal got the Tigers on the board, they got within a run when Colin Conroy hit a line drive that ricocheted off Cecconi for an RBI double.

Left-hander JP Gates replaced a shaken up Cecconi on the mound, but the Tigers continued to rally, tying the game at 3 when Javon Fields hit a line drive to second that pushed home Conroy.

But Miami answered in a big way in the sixth, loading the bases against right-hander Kody Reeser before Tony Jenkins worked a walk that put the Canes on top, 4-3.

The Hurricanes batted around in the sixth, adding two runs when Luis Tuero singled to right off of reliever Austin Weber, driving in Isaac Quiñones while Jenkins scored on a throw to third base. Vilar picked up two more RBI on a two-run single to left, sending home Jared Thomas and Tuero to turn in his second straight 3-RBI performance.

“I feel good, especially in those two at-bats,” Vilar said. “I didn’t feel as good in the other three at-bats. I feel like they are wasted, but the two that I got hits, I felt good at the plate there.”

Towson loaded the bases to start the top of the seventh against UM right-hander Jake Garland, who earned his first career win. DiMare signaled for fellow freshman Carson Palmquist and the lefty got three quick outs to strand the trio of Tigers on the bases.

“The bullpen did a very good job,” DiMare said. “Carson, the guy came in with the bases loaded, nobody out. To be able to get out of that with no damage at all. We were just trying to minimize. A run would be fine, but, geez, we got out of there with no runs, which was excellent. The guys at the end did a good job.”

The Canes loaded the bases again in the seventh, scoring a run on a fielder’s choice to left field by Tyler Paige. The junior infielder lined a ball that dropped in just shy of left fielder Trent Gast-Woodard and Miami’s runners were forced to hold up. Gast-Woodard threw in to third, retiring Jenkins, but Toral cruised home to give Miami a 9-3 lead.

The Hurricanes are back in action Wednesday, hitting the road for the first time in 2020. Miami will travel to Boca Raton, Fla., for a matchup against the FAU Owls. First pitch is set for 6:30 p.m.