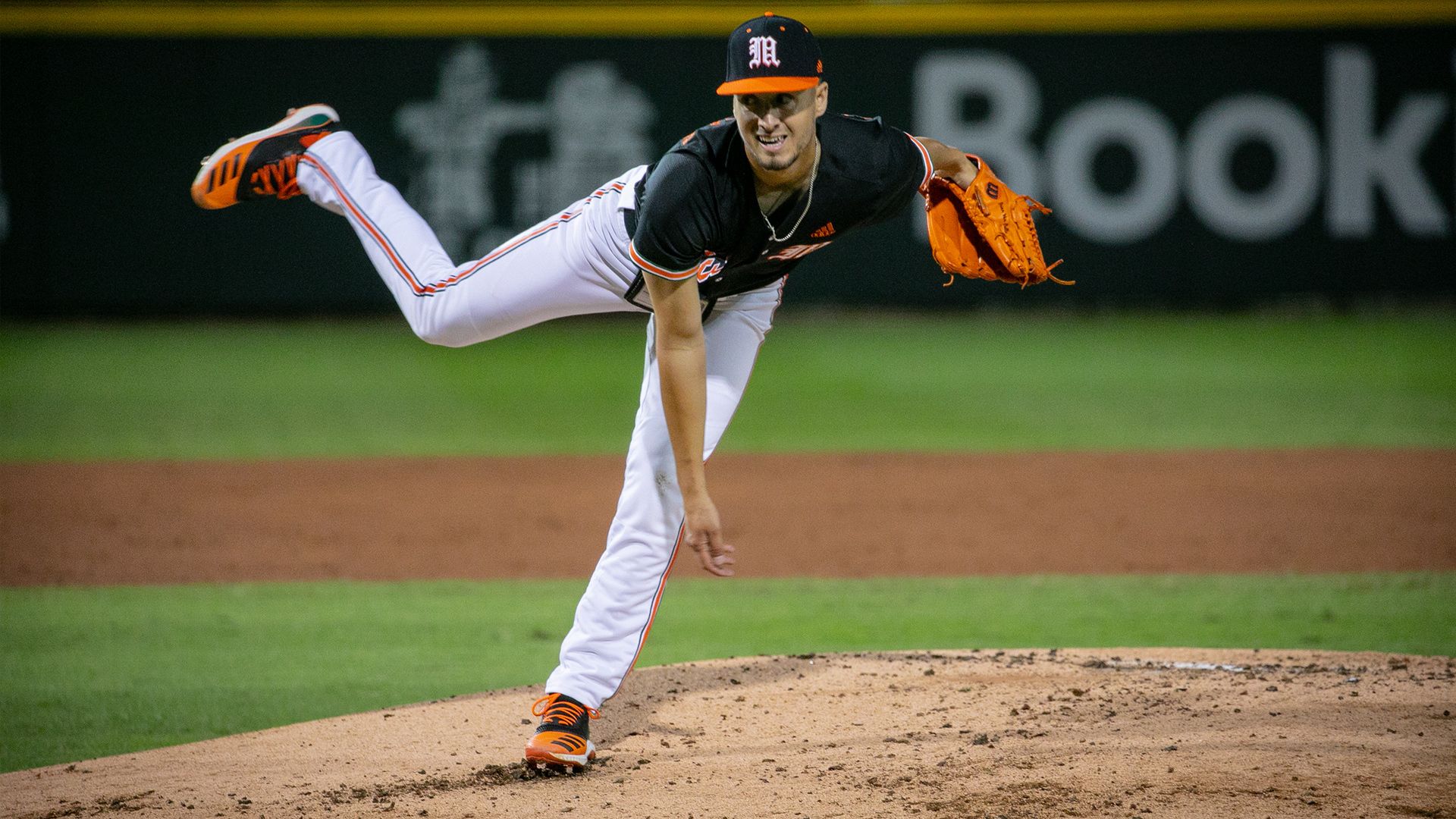 CORAL GABLES, Fla. – It only seems fitting that it took extra innings to decide the winner of a game between the top two teams in the country.

“At the end of the day it’s one game. We have to turn the page and be ready to go,” Miami head coach Gino DiMare said. “We still have a chance to win the series. Tomorrow is the most important game of the year.”

Both sides turned in impressive pitching performances, but Florida caught a break in the top of the 11th inning against Miami closer Daniel Federman.

With the game tied at 1, Austin Langworthy and pinch hitter Jordan Butler connected on consecutive one-out singles to put runners at the corner for second baseman Cory Acton. Federman struck out the Gators’ cleanup hitter, but right fielder Jacob Young doubled down the third base line to snap the tie and put Florida ahead, 2-1.

Anthony Vilar led off the bottom of the inning with a four-pitch walk, but reliever Nick Pogue took over for right-hander Ben Specht and retired the heart of Miami’s lineup to save the game for Florida.

Miami starter Brian Van Belle was brilliant to open the game, retiring the first seven batters of the game and allowing just one base runner while tallying seven strikeouts over the first four innings.

“My command was pretty on tonight. I felt good overall. We’re all ready to get after it tomorrow,” Van Belle said.

But Florida got something going against Van Belle in the fifth, opening the inning with an infield single by Acton and a bunt single from Young to put two on with no outs.

A walk to Nathan Hickey loaded the bases before Kris Armstrong lined out to Vilar at shortstop, but the Gators scratched a run across when Vilar’s throw to second trying to double up Young got away from Tyler Paige and Acton scored on the throwing error.

“I thought it was a well-played game from both sides,” Van Belle said. “It’s baseball, things are going to happen. The ball is going to fall one way or the other and the ball just happened to fall their way tonight.”

Miami got some action going in the bottom of the inning, with Gabe Rivera reaching on an error and JP Gates walking. But Florida starter Tommy Mace got out of the jam to protect the Florida one-run lead through five innings.

Jordan Lala ripped a laser down the first base line for a leadoff double in the sixth. Florida head coach Kevin O’Sullivan elected to intentionally walk Adrian Del Castillo, but Raymond Gil followed with a sacrifice fly to center that drove home Lala and evened the game at one run apiece.

“Adversity builds character,” Van Belle said. “It’s a tough pill to swallow, but I think we’re going to come out with some fire tomorrow.”

Senior Tyler Keysor took the mound in the eighth inning and got two quick outs before walking Jud Fabian. JP Gates entered to face the left-handed hitting Langworthy and the sophomore induced and inning-ending popout to second that kept the stalemate intact.

Florida turned to its bullpen in the bottom of the eighth, calling for right-hander Christian Scott after seven quality innings by Mace. The junior right-hander allowed one run on two hits while striking out eight.

Gates tossed a scoreless top of the ninth, but Scott retired Miami in order to send the game to extra innings. The sophomore lefty returned to the mound in the 10th and got two quick outs before handing the ball to Federman.

“It’s kind of abnormal, not many people do it,” Gates said of pitching and hitting. “It’s any other game. They’re any other team to me. It’s what I do. Tight game, it’s just pitching.”

Florida shortstop Josh Rivera snuck a double inside the first base bag and advanced to third on a passed ball, but Federman got Cal Greenfield to fly out to right and strand the Gator base runner at third.

Miami appeared to get something going in the bottom of the 10th, with Gates leading off the frame with a base hit to left. Tony Jenkins put down a sacrifice bunt and appeared to reach on an error, but umpires ruled that he was out of the baseline and called him out.

“I didn’t have an angle but some of our coaches thought that it was the right call,” DiMare said. “You don’t realize how many times baserunners run out of the baseline going up the line. The problem is you never know it because there’s no throws from behind him. …[Right-handed hitters] they really need to establish themselves to get in the baseline.”

The ruling changed the entire inning for Miami, which would have had runners on first and third with no outs. Instead, pinch runner Chet Moore was returned to first base and Specht retired Paige and Lala to send the game to the 11th inning.

Miami and Florida will return Saturday for Game 2 of the three-game series. Junior right-hander Chris McMahon will toe the rubber for the Hurricanes opposite Gators’ right-hander Jack Leftwich. First pitch is set for 7 p.m.