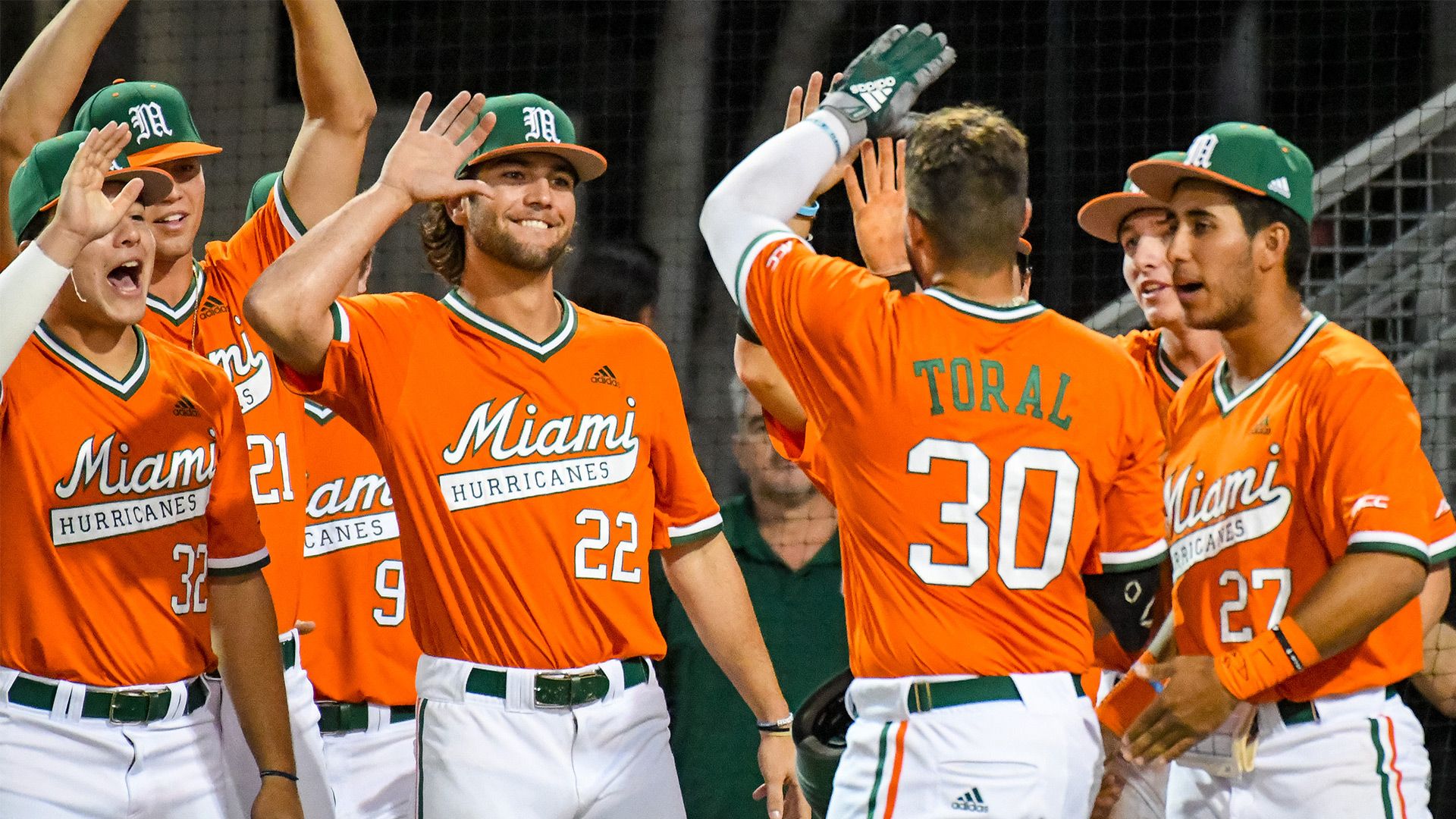 Fresh off of a climb to the top of the D1 Baseball rankings, the Canes entered their first midweek contest of the 2020 season with a big rivalry series looming against the No. 2 Florida Gators. But Miami (4-0) kept its focus in the present and demolished the Golden Flashes (2-2) before 2,213 fans inside Alex Rodriguez Park at Mark Light Field.

“I just told the guys I thought that was about as complete game as I can recall,” Miami head coach Gino DiMare said. “Last year, we were 9-3 in midweek games but we blew some leads. We got ahead early and we let teams get back in the game, and it was good to see us get up and kind of close it out and finish the game. I thought it was just a complete game. We pitched well. We played good defense, no errors again, which I think that’s happened a few times so far in the four games, which is good. And we swung the bat well. So, all in all, very happy. Good to get that game behind us now and focus on this weekend.”

Miami’s bats got hot from the start, with reigning ACC Player of the Week Adrian Del Castillo sparking a rally with a two-out single in the first. Raymond Gil hit a hot shot to third that Mack Timbrook could not handle and the error brought defending ACC home run champ Alex Toral to the plate. The herculean first baseman destroyed an 0-2 pitch from Kent State starter Zach Schultz, and deposited it over the outfield wall for a three-run homer – his first of the season.

“That was great to finally get that one off my chest,” said Toral, who blasted 24 home runs a year ago. “It’s always good when you hit one out, but that first one us means a little more.”

Alex McFarlane was electric in his first career start, allowing just one hit and striking out three batters over two scoreless innings. The freshman right-hander, who threw a pair of shutout innings in his UM debut over the weekend, threw 33 pitches on the night after entering the game on a pitch limit.

“Man, I like watching him pitch,” DiMare said. “He is really talented. I’m sitting there just thinking, ‘I can’t wait to see this guy’s second and third year—how good this guy can be—he really could be a top, top, top pick.’ He’s got an electric arm. He’s just tapping into what he’s doing. I mean he weighs 185 pounds, if I had to guess. He’s going to get bigger. He’s going to get stronger. … He’s a freshman, but he’s got a very, very good arm. He’s 90 to 95 miles-per-hour. We were just going over the velocities and the slider was mid 80s. And he’s got a great change-up, excellent change-up. So you’re excited as a coach when you get guys like that, you’re like, this could be really special for three years.”

McFarlane’s battery mate, fellow rookie Jared Thomas’ first career hit was a big one. The bases-loaded, two-run double off the top of the wall in right-center got the offense going with one out in the bottom of the third. Jenkins followed with a three-run blast that hit off the scoreboard in left field and gave the Hurricanes an 8-0 advantage. His homer was the outfielders’ first since a two-homer game at Virginia Tech on May 12, 2018.

“It’s definitely a great feeling to hit a home run,” Jenkins said. “We’ve been working really hard and in practice and in the offseason, so it’s finally good to see everything starting to pay off.”

Del Castillo did some more damage in the third, welcoming reliever Trevor Pittman to the game with a two-run single that capped the seven-run frame for the Canes and put them on top by 10 runs after the opening third of the contest.

Miami’s offense continued to roll in the fourth, putting two runners on before Jenkins smoked a rope to left for an RBI single that tied his career high with four RBI. Anthony Vilar added an RBI on a sacrifice fly to left that pushed home Thomas and gave the Canes a dozen runs through four innings.

Chad Crosbie, who entered the game in the bottom of the sixth, made an impressive play to preserve the shutout in the top of the seventh. The senior caught a sinking line drive off the bat of Michael Turner and threw a strike to home plate to retire Grant Vera.

The top-ranked Hurricanes are back in action this weekend, hosting No. 2 Florida in a three-game series beginning Friday at 7 p.m. Game 2 is set for 7 p.m. on Saturday, while Sunday’s series finale is scheduled for a 1 p.m. start. For tickets, click HERE or call 305-284-CANE.