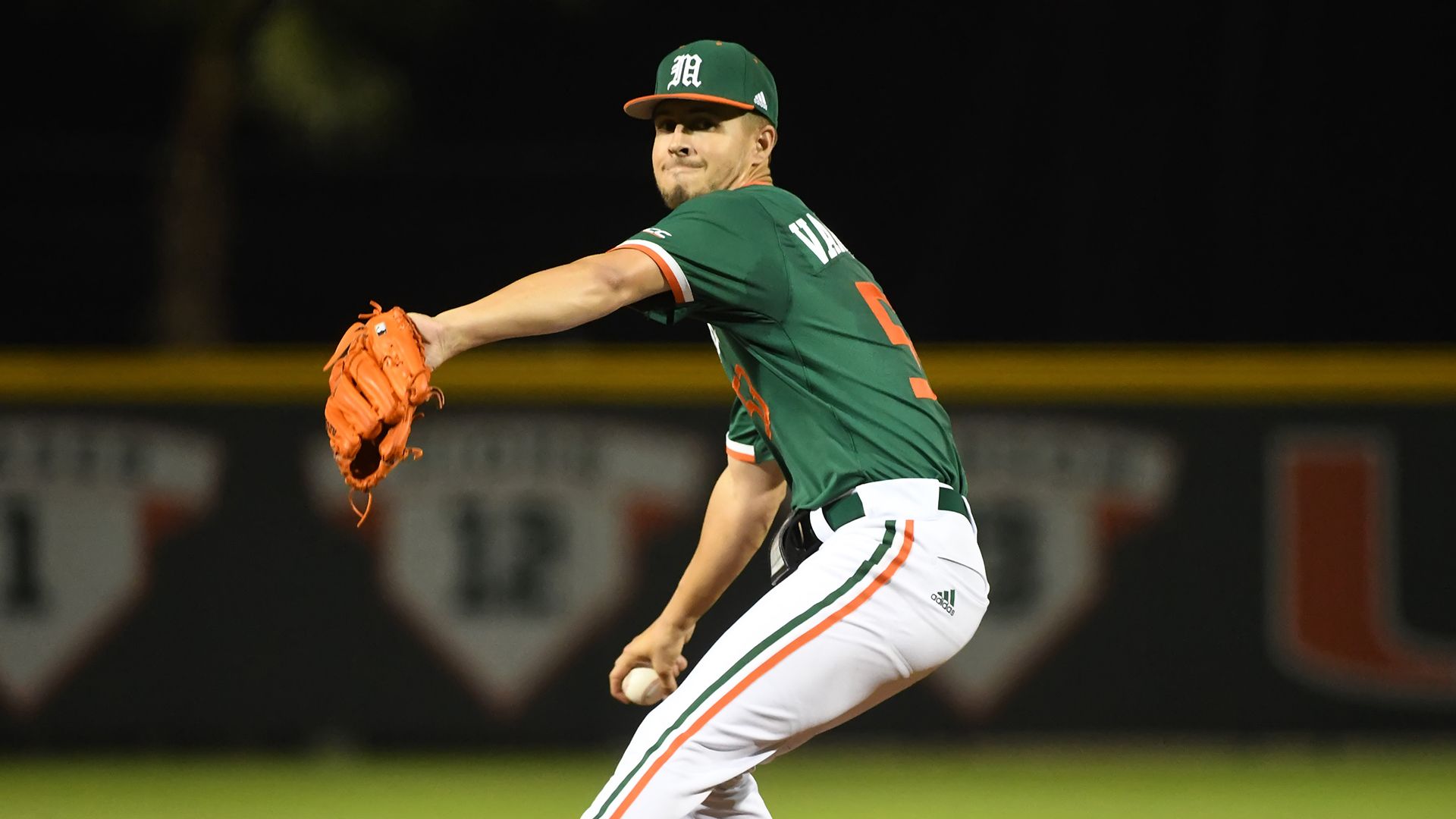 CORAL GABLES, Fla. – Wins are sweet, no matter how they come, and the Miami Hurricanes picked up their first victory of the 2020 season Friday night inside Alex Rodriguez Park at Mark Light Field.

The Hurricanes (1-0) had a record-setting offensive performance on Opening Day against Rutgers a year ago, winning 19-3. Fast forward 365 days and the No. 3 Canes earned a 2-1 win over the Scarlet Knights (0-1), their 11th consecutive Opening Day victory over Rutgers, but did so thanks to an outstanding pitching performance and some excellent defense.

“I think it’s good because when you’re facing really, really good teams, you’re not going to win 19-3,” head coach Gino DiMare said. “So, that put them right out of the gate in the fire. … I thought it was great to get thrown right into it and get a taste of that. And our guys are going to have to learn to win games like that. One of the things we didn’t do last year is finish games. We did not finish games, and especially a lot of games where we had leads. We finished tonight. It was a close game and we finished it. So that’s good.”

Redshirt senior Brian Van Belle was excellent in his first Opening Day start, fanning a career-best 10 batters while allowing just four hits over six shutout innings. The right-hander bested a previous career-high nine strikeouts set on March 3, 2019 against UMBC. Van Belle’s 10-strikeout performance was the first by a Hurricane since Chris McMahon struck out 10 batters on March 2, 2019 against UMBC.

“We went to the change-up a lot throughout the game,” Van Belle said. “A lot of times it was cutting, but it just felt like it was working pretty well.”

Van Belle earned his first career Opening Day victory and he got a little help from a third-inning rally. Miami loaded the bases in the third thanks to a pair of singles by Anthony Vilar and JP Gates and a two-out walk by Tony Jenkins. Then Miami’s reigning RBI leader, Adrian Del Castillo, delivered with a two-run single up the middle to put the Hurricanes ahead, 2-0.

“I actually didn’t want to walk and Gino gave me the take sign on 3-0,” Del Castillo said. “And I was hoping he would throw a strike so I could swing the bat. Thankfully he did throw a strike and it was 3-1. I got a good pitch to hit and hit up the middle.”

Tyler Keysor tossed a scoreless seventh inning in relief of Van Belle, but Rutgers cut Miami’s lead in half in the top of the eighth as first baseman Chris Brito hit a solo homer to centerfield off of Keysor. But JP Gates and Daniel Federman came in and picked up a strikeout apiece to keep the Canes ahead by a run.

The Scarlet Knights kept themselves in the game by limiting the vaunted Miami offense to just a pair of runs. Starting pitcher Harry Rutkowski surrendered two runs over five innings, while right-hander Kyle Muller tossed 2.1 scoreless innings before lefty Eric Reardon fanned two batters to end the eighth inning and send Rutgers to the plate chasing one run.

“I think their pitchers did a very good job locating and they were throwing strikes and letting us hit the ball,” Del Castillo said. “Those relievers were pretty good too. Not that they were overpowering, but I think that we just need to do a better job just, you know, with situational hitting.”

Federman returned to the mound looking to shut the door in the ninth, but Sam Owens turned a seven-pitch at-bat into a leadoff walk to bring the go-ahead run to the plate.

Third baseman Tim Dezzi hit a sharp grounder up the middle that appeared to be a base hit off the bat, but Miami second baseman Tyler Paige made an incredible backhand stop and flipped the ball from his glove to shortstop Anthony Vilar to start a crucial 4-6-3 double play that sent the 2,700 fans inside Alex Rodriguez Park into a frenzied celebration.

Following Paige’s defensive wizardry, Federman induced a game-ending groundout by Kevin Welsh to complete his first save of the season.