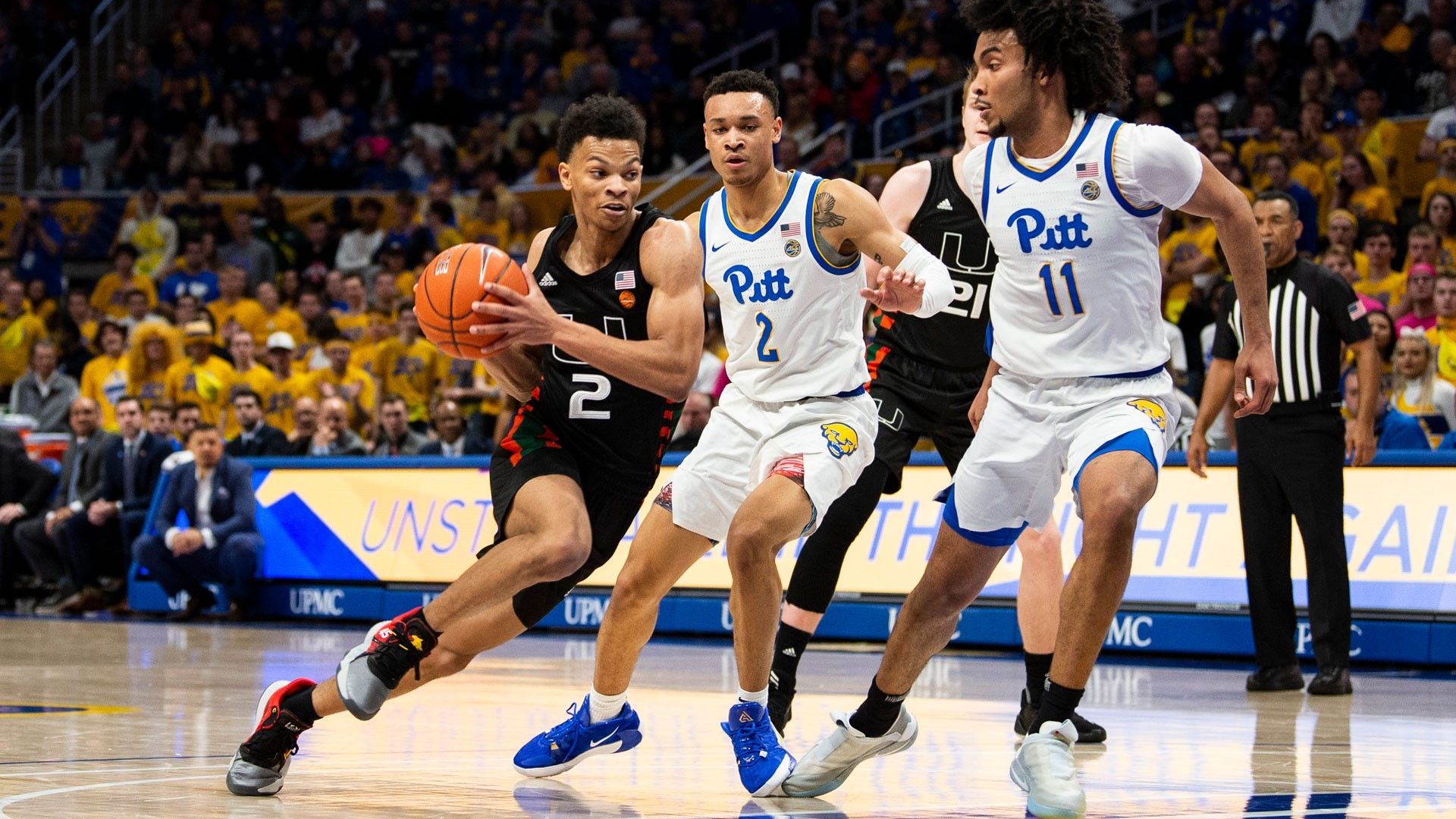 PITTSBURGH – Playing without starting guards Chris Lykes and Kameron McGusty due to injury, the University of Miami men’s basketball team fell, 62-57, in a hard-fought decision Sunday afternoon at Pittsburgh.

Redshirt junior center Rodney Miller, Jr., paced Miami, which rallied from a double-digit deficit to take a late lead, with a career-high-tying 16 points on 6-of-9 shooting at the Petersen Events Center.

“I thought, defensively, we did a very good job in both halves,” Miami head coach Jim Larrañaga said. “Even in the zone, we did a great job on the first shot. Our problem is our rebounding is not as good as it needs to be.”

Pittsburgh (14-8, 5-6 ACC) held the Hurricanes scoreless for a stretch of five-and-half minutes in the first half and went on a 7-0 run to take a 25-15 edge with 5:43 on the clock. Freshman guard Isaiah Wong then hit back-to-back 3-pointers, two of Miami’s only three long-range makes on the day, in 33 seconds to quickly make it a four-point game.

Early in the second half, Miami went on a 12-4 run, capped by a 6-0 spurt and featuring seven straight Pittsburgh misses, to take a 40-39 advantage with 12:54 to play. The Panthers answered right back with an 8-2 burst and held a five-point lead with 9:52 remaining.

The Hurricanes pulled even at 49 with 5:09 left after five straight points by freshman guard Harlond Beverly and, shortly thereafter, went in front, 53-51, with 2:41 on a layup by Wong. Pittsburgh sophomore guard Xavier Johnson, however, then used on a personal 7-2 run to give his team a 58-55 edge with 40 ticks left after not previously scoring in the half.

Miami got the deficit back down to one, but could not climb all the way back and came up on the short end of a single-digit result for just the second time in 2019-20.

Wong tallied 15 on 5-of-6 shooting in a career-high 39 minutes and Beverly added 11, including nine in the last six minute, to go along with a career-best boards in a career-high-tying 35 minutes. Senior guard Dejan Vasiljevic tallied 10 points, giving Miami four double-figures scorers, and a team-high nine rebounds in 39 minutes of action, finishing just shy of his third-career double-double.

McGowens, a sophomore guard, led all scorers with 17 points, 14 of which were in the second half, for the Panthers. Toney totaled 15 points and a game-high 10 rebounds after Miami limited him to a 1-of-8 mark after the intermission, while Johnson logged 13 and a game-best six assists.

The Hurricanes went 16-of-19 (84.2 percent) from the stripe, but just 3-of-22 (13.6 percent) beyond the arc to tie their second-lowest total in made 3-pointers this year. They also conceded 17 offensive rebounds, all but two of which came in the second half.

MIAMI HURRICANES POSTGAME NOTES
– The Hurricanes moved to 23-19 all-time against Pittsburgh, including 8-11 on the road and 7-2 in Larrañaga’s tenure.
– Miami’s seven-game winning streak versus Pittsburgh, which was its longest against any ACC foe and dated back to March 4, 2015, came to an end Sunday.
– Larrañaga, who entered the game with the 10th-most victories of any active Division I coach, is now 656-441 in 36 years as a head coach, including 186-107 in nine seasons at Miami.
– For the third game in a row, Miami used a starting lineup of Beverly, Miller, Vasiljevic, Wong and redshirt junior forward Sam Waardenburg.
– As announced prior to the game, Lykes, a junior, did not play for the third straight outing due to a groin injury after competing in the first 82 contests of his career.
– As also announced before tip-off, McGusty, a redshirt junior, missed his second game in the past three due to back spasms after starting the first 18 affairs of the year.
– Miami is now 11-0 when leading or tied at halftime and 0-10 when trailing through 20 minutes this season.
– Prior to Sunday, 74 was the lowest point total Miami conceded in a defeat, Jan. 7 at No. 13/11 Louisville.
– Miami was previously 7-0 this year when four-plus players scored in double figures and 4-0 when holding its opponent under 40 percent shooting.
– The sides combined for just four total bench points, all of which came from the Panthers.
– The Hurricanes’ 24 points in the opening session tied their lowest mark in a half this year, as they also recorded 24 before the break Jan. 21 at eighth-ranked Duke.
– Beverly, who surpassed 50 assists and reached 150 points in his young career, notched his sixth double-digit scoring outing.
– Vasiljevic, who posted his 59th double-figure point total and eclipsed 350 rebounds as a Hurricane, passed Jack McClinton for fifth place on Miami’s ACC-only minutes list, now with 1,635.
– Vasiljevic also passed Jack McClinton for the top spot on Miami’s ACC-only 3-point attempts list, now owning 360.
– After connecting on a 3-pointer in 22 consecutive games, including the first 20 of this season, Vasiljevic went 0-of-4 from deep Sunday.
– Wong, who reached 100 points in his young career, registered his third straight double-digit scoring performance after not hitting that mark in any of his first 18 outings.
– Miller logged his eighth double-figure scoring total, including his fifth in the past six contests.
– Along with matching his career high in points, Miller tied his top marks in field goals made and attempted, plus steals (two).