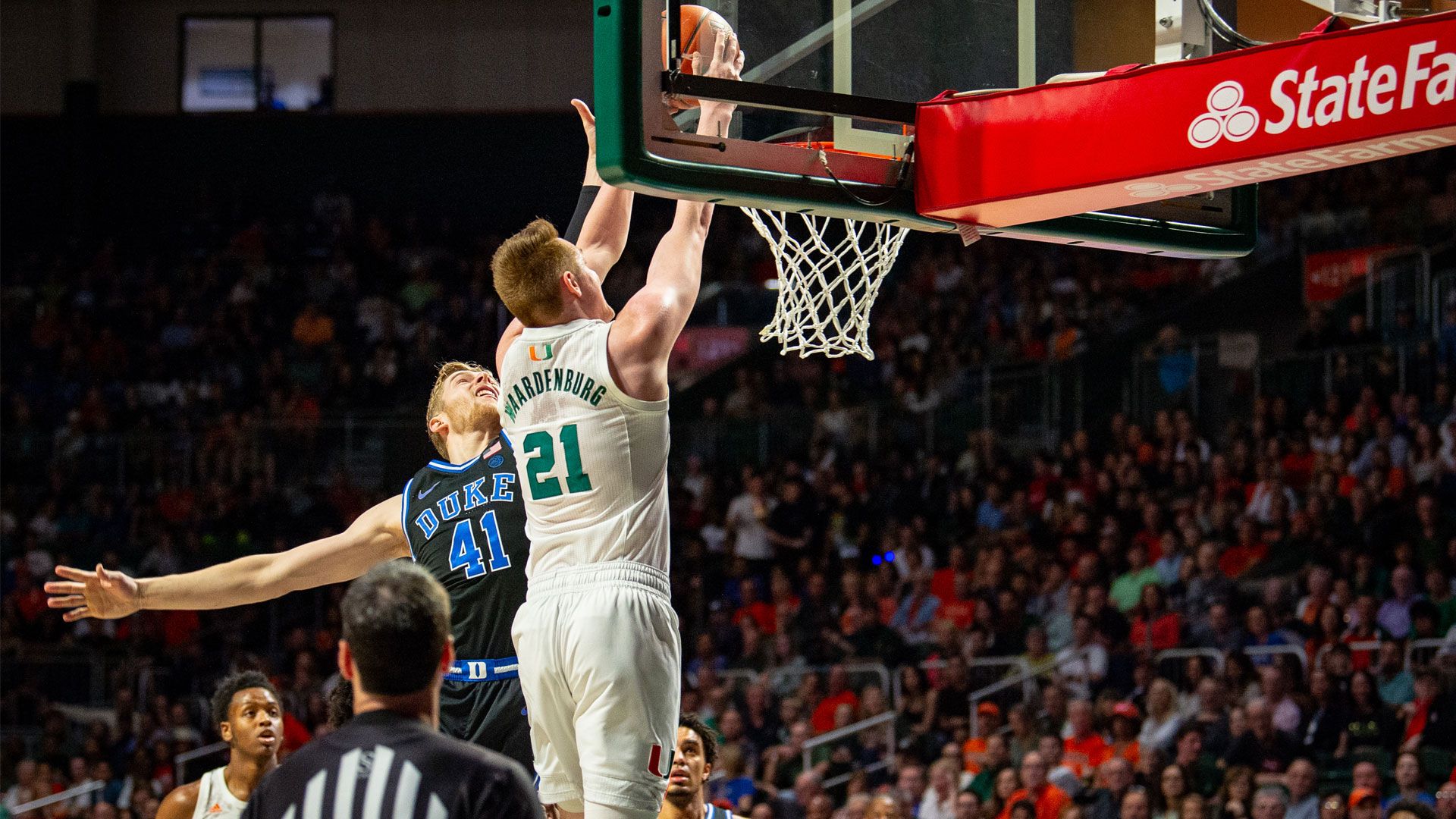 “They didn’t do anything that threw us off our game,” Miami head coach Jim Larrañaga said, “they do everything to make your life miserable and they do that against everybody.”

Neither team led by over six points in the first 13-plus minutes, but Duke (13-1, 3-0 ACC) logged a stretch during which it made 12-of-15 shots, including six in a row, to take a 43-32 edge with 2:25 left in the half. With the lead still at 11 in the closing seconds, freshman forward Matthew Hurt hit a buzzer-beating 3-pointer to give the Blue Devils a 50-36 advantage at the break.

Freshman guard Cassius Stanley went 6-of-7 from the floor, made both his 3-pointers and scored 16 first-half points, including the Blue Devils’ first seven. As a whole, Duke shot 61.8 percent (21-of-34) from the field in the opening 20 minutes.

The Blue Devils continued their hot shooting throughout the second half, as Miami was unable to pull any closer than 13 and suffered its largest loss of the season.

Just two Hurricanes finished with double digits in the scoring column, as redshirt junior forward Sam Waardenburg joined McGusty on that list with 11 points on 4-of-6 shooting, adding a team-high six rebounds.

Duke freshman center Vernon Carey, Jr., finished with 24 points, the most by a Miami opponent this season, on 11-of-14 shooting. Stanley logged 20 points and went 8-of-11 from the floor, while Hurt added 13 on a 6-of-8 clip.

The Hurricanes will now travel to Louisville, Ky., where they take on No. 7/8 Louisville Tuesday at 7 p.m., live on ESPN2 from the KFC Yum! Center.

MIAMI HURRICANES POSTGAME NOTES
– The Hurricanes moved to 7-21 all-time against Duke, including 5-9 at home and 5-6 in Larrañaga’s tenure.
– This is the first time under in Coach L that Miami has dropped three consecutive games to the Blue Devils, after winning five of the first eight matchups.
– Larrañaga, who entered the game with the 10th-most victories of any active Division I coach, is now 654-435 in 36 years as a head coach, including 184-101 in nine seasons at Miami.
– For the 13th time in as many games this season, Miami used a starting lineup of McGusty, Waardenburg, junior guard Chris Lykes, redshirt junior center Rodney Miller, Jr., and senior guard Dejan Vasiljevic.
– Miami, 9-0 when leading or tied at halftime, is now 0-4 when trailing through 20 minutes this season.
– The Hurricanes committed seven personal fouls in the opening 7:22, putting Duke in the bonus with 12:38 remaining in the first half, but did not commit another—their final one of the session—until 1:13 remained on the clock.
– Duke finished with the most points, made field goals, assists (23) and steals (nine), as well as the highest field goal percentage, of any Miami foe in 2019-20.
– The only other time this season Miami allowed 50 points in a half was the in the second half of the opener, Nov. 5, against fifth-ranked Louisville.
– Miami’s last loss by 30-plus also came against Duke, an 87-57 setback on March 2, 2019, in Durham, N.C.
– The Hurricanes last conceded 90-plus points Jan. 6, 2019, allowing exactly that number on the road at Louisville.
– Duke finished 0.3 percent shy of becoming the first Miami foe to shoot 60 percent since Florida State posted exactly that mark on Jan. 27, 2018, in Tallahassee, Fla.
– Prior to Carey scoring 24 points, the most Miami had allowed to an opposing player was 23 to both Nwora and Illinois’ Kofi Cockburn, the latter coming Dec. 2 on the road.
– Stanley’s 16 points are the second-most Miami has allowed to an opposing player in a half this season, trailing only the 18 scored by Jordan Nwora of Louisville in the second half of the aforementioned Nov. 5 matchup.
– The last time two opposing players scored 20-plus points against the hurricanes was Feb. 26, 2019, when Chaundee Brown (23) and Brandon Childress (21) of Wake Forest did so in Winston-Salem, N.C.
– In all four of Miami’s defeats this season, its opponent has shot at least 50 percent from the floor in both halves.
– McGusty, who surpassed 1,750 minutes played in his career, recorded his 39th double-digit scoring performance.
– Waardenburg, who eclipsed 250 rebounds as a Hurricane, tallied his 11th double-figure point total, including his fourth in the past six games.
– Vasiljevic, who is 24-of-24 at the line this season, moved past both 1,050 points and 2,750 minutes played at Miami.
– Miller reached 50 made field goals as a collegian.
– Redshirt senior forward Keith Stone surpassed 50 steals in his career.