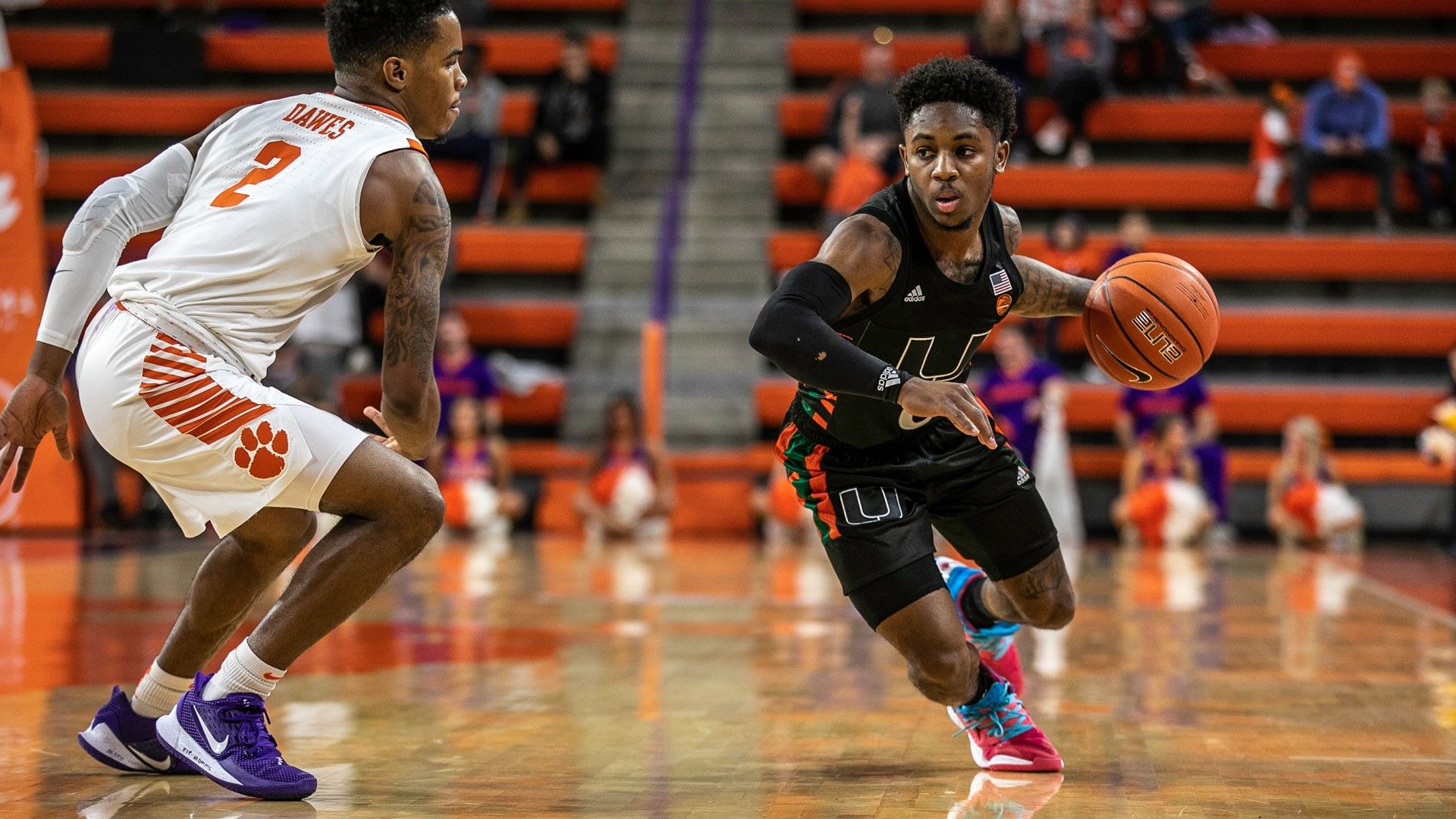 CLEMSON, S.C. – The University of Miami men’s basketball team capped the decade with a thrilling 73-68 overtime victory over Clemson Tuesday at Littlejohn Coliseum.

“The biggest thing is, when we fell behind by 10, the players didn’t come unglued,” Miami head coach Jim Larrñaga said. “They stuck together and at timeouts, they were cheering for each other. That makes a big difference down the stretch. And then our guards just elevated their games. Chris, DJ [Vasiljevic] and Kam [McGusty] were outstanding in the last five minutes of regulation and in overtime.”

The Hurricanes held Clemson without a point for a span of 5:21, as the Tigers missed five shots in a row after making eight of their first 15. Ultimately, the teams went into the break with 26 points apiece, the first time Miami has been tied at the half this season.

After the Hurricanes scored the first two points of the second half, Clemson scored 20 of the next 28 to take a game-high 10-point lead, 46-36, with 12:53 remaining. That also marked the time at which the Tigers, who connected on six consecutive field goals, entered the bonus.

Clemson then scored the next five points, taking a 62-60 advantage with 1:59 to play, and Lykes tied the game at 62 on a driving layup with 48 ticks on the clock. The Hurricanes had two chances to win in regulation in the closing seconds, but missed both shots and the contest went to overtime.

Miami tallied the first four points of the extra session to take a then-game-best four-point lead, but Clemson countered with six in a row to go ahead, 68-66, with 1:56 remaining. A pair of Lykes free throws and a contested 3-pointer by Vasiljevic then made it a 71-68 Miami lead with 59 seconds to play. Vasiljevic then iced the win with two free throws in the waning seconds.

“When we fell behind by 10—we are predominantly a man-to-man team, but they were scoring on us too regularly. At one point, they were shooting 77 percent in the second half,” Larrañaga said. “We switched to a 2-3 zone and they started missing some shots, which gave us a chance to get back in the game and our guys took advantage of it.”

Lykes, who finished one shy of his career high in both points and made field goals, finished 10-of-16 from the floor, 3-of-6 on 3-pointers and 4-of-5 at the line in a career-high-tying 41 minutes.

Vasiljevic totaled 15 points and seven rebounds, as well as made all five of his free throws to set ACC highs in both makes and attempts, in a career-best 43 minutes and redshirt junior guard. Kameron McGusty scored 15 points in a season-best 41 minutes and redshirt senior forward Keith Stone grabbed a game-best nine boards, one shy of his career high, before fouling out in overtime.

Up next for Miami is a matchup with second-ranked Duke Saturday at 8 p.m. at the Watsco Center, live on ESPN.

MIAMI HURRICANES POSTGAME NOTES
– The Hurricanes moved to 13-14 all-time against Clemson, including 3-8 on the road and 7-3 in Larrañaga’s tenure.
– Larrañaga, who entered the game with the 10th-most victories of any active Division I coach, is now 654-434 in 36 years as a head coach, including 184-100 in nine seasons at Miami.
– Tuesday marked the 17th time Coach L’s team has gone to overtime in his tenure and he is now 9-8 in those matchups, including 6-4 in ACC play.
– The Hurricanes improved to 4-1 all-time on New Year’s Eve, including 2-0 in ACC play, 2-0 on the road and 2-0 under Larrañaga.
– For the 12th time in as many games this season, Miami used a starting lineup of Lykes, McGusty, Vasiljevic, Waardenburg and redshirt junior center Rodney Miller, Jr.
– Miami is now 3-0 in true road games this season after going 0-10 in such contests during the 2018-19 campaign.
– In addition, the Hurricanes are 5-2 away from home in 2019-20 after tallying a 3-13 mark one season ago.
– Miami’s last overtime game was Feb. 9, an 88-85 setback at eighth-ranked North Carolina.
– The Hurricanes last tallied an overtime victory Jan. 24, 2018, a 78-75 triumph over Louisville in Coral Gables, Fla.
– Miami’s most recent overtime road win was Feb. 20, 2017, a 54-48 decision at Virginia.
– The last time Miami was tied at halftime was Jan. 19, at 37 each way, in an eventual 85-76 loss to No. 13/15 North Carolina at the Watsco Center.
– Clemson did not score a point from the 8:58 mark of the first half to the 3:35 mark, missing all five of its field goals and both of its free throws.
– Lykes became the 41st Hurricane to tally 1,000 points, including the 26th to do so in fewer than four years and the 10th under Coach L.
– Additionally, Lykes notched his 54th double-figure scoring game and 12th 20-point performance.
– McGusty, playing in the 75th game of his career, registered 10-plus points for the 38th time.
– Vasiljevic recorded his 52nd double-digit point total.
– Stone eclipsed both 550 points and 300 boards as a collegian.
– Four Hurricanes played 40-plus minutes, as Waardenburg registered a career-high 40 to join Lykes, McGusty and Vasiljevic in that group.
– The last time at least three Miami players notched at least 40 minutes in a contest was Jan. 3, 2015, an 89-80 setback at third-ranked Virginia in double overtime.
– Tuesday marked the first time in the ACC era (2004-05 to present) that four Hurricanes played 40-plus minutes in the same game.