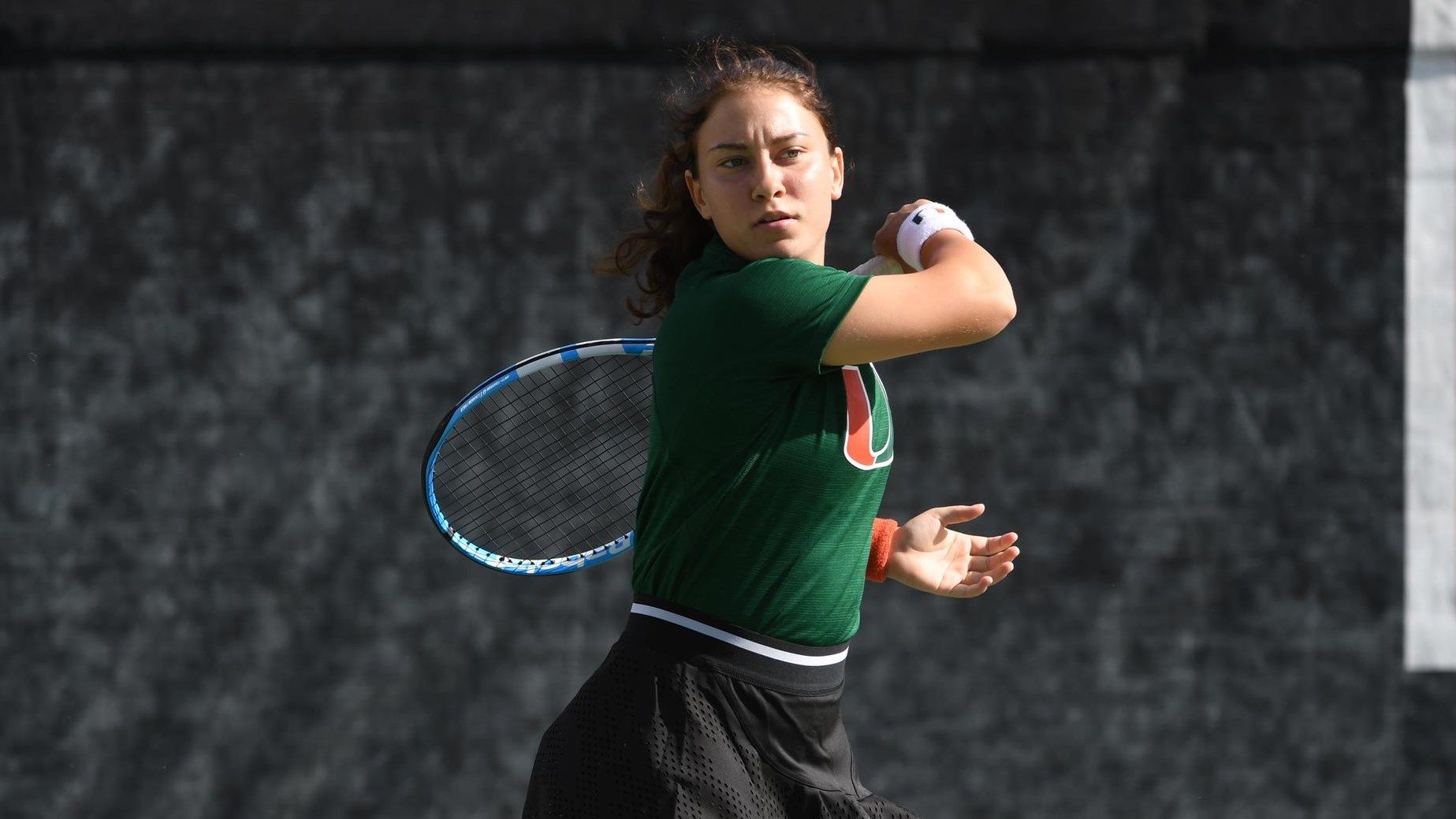 AUSTIN, Texas – The University of Miami women’s tennis team continued play Saturday at the Texas Invitational, tallying a 5-3 record, including a 3-1 ledger in doubles action.

Outside of the Burnt Orange singles main draw, in which sophomore Daevenia Achong advanced to the final, all matches at the Texas Tennis Center were played outside of a bracket format.

“I was very pleased with doubles, especially with Yuna [Ito], in the way she was leading on the court with her intelligence,” Miami associate head coach Laura Vallverdu said.

In doubles play to start the day, Ito, a senior, and freshman Nada Dimovska earned victories in both of their matches, first defeating Rice’s Anna Bowtell and Maria Budin, 7-5. They followed that with a 6-4 result against another pair of Owls, Linda Huang and Anastasia Smirnova.

Meanwhile, Achong and freshman Selma Cadar topped SMU’s Katherine Jakeway and Nicole Petchey, 6-4. They then dropped their second match, 3-6, against Bowtell and Budin.

“Daevenia and Selma had a slow start to their second match and that was definitely what made the difference in the end,” Vallverdu said. “That may happen sometimes—we are human—but if it does, we cannot afford not to quickly make an adjustment.”

In the lone bracketed match of the day, a Bunt Orange singles semifinal, top-seeded Achong, ranked No. 80, recorded a 6-4, 1-6, 6-3 decision against Dorthea Faa-Hviding of Texas A&M.

Cadar also notched a singles victory, picking up a 6-3, 6-2 decision against Diae El Jardi of Rice. The Hurricanes dropped their other two matches, finishing 2-2 in singles play on the day.

“Singles had some bright spots to focus on, so we will speak about those and move forward. [We need to] keep building towards tomorrow and stay on top of our game for the end of this tournament,” Vallverdu said. “Physically, we feel good. Mentally, we have time to get refreshed, so there should be nothing stopping us from giving ourselves a chance to be successful tomorrow.”

Achong meets Texas’ Fernanda Labraña Sunday at 10 a.m. ET for the Burnt Orange singles title, while Ito meets Sarai Monarrez Yeskai of SMU at the same time. In addition, Cadar plays Rice’s Callie Creath and Dimovska squares off with her teammate, El Jardi, with those matches scheduled for not before 11 a.m. ET.