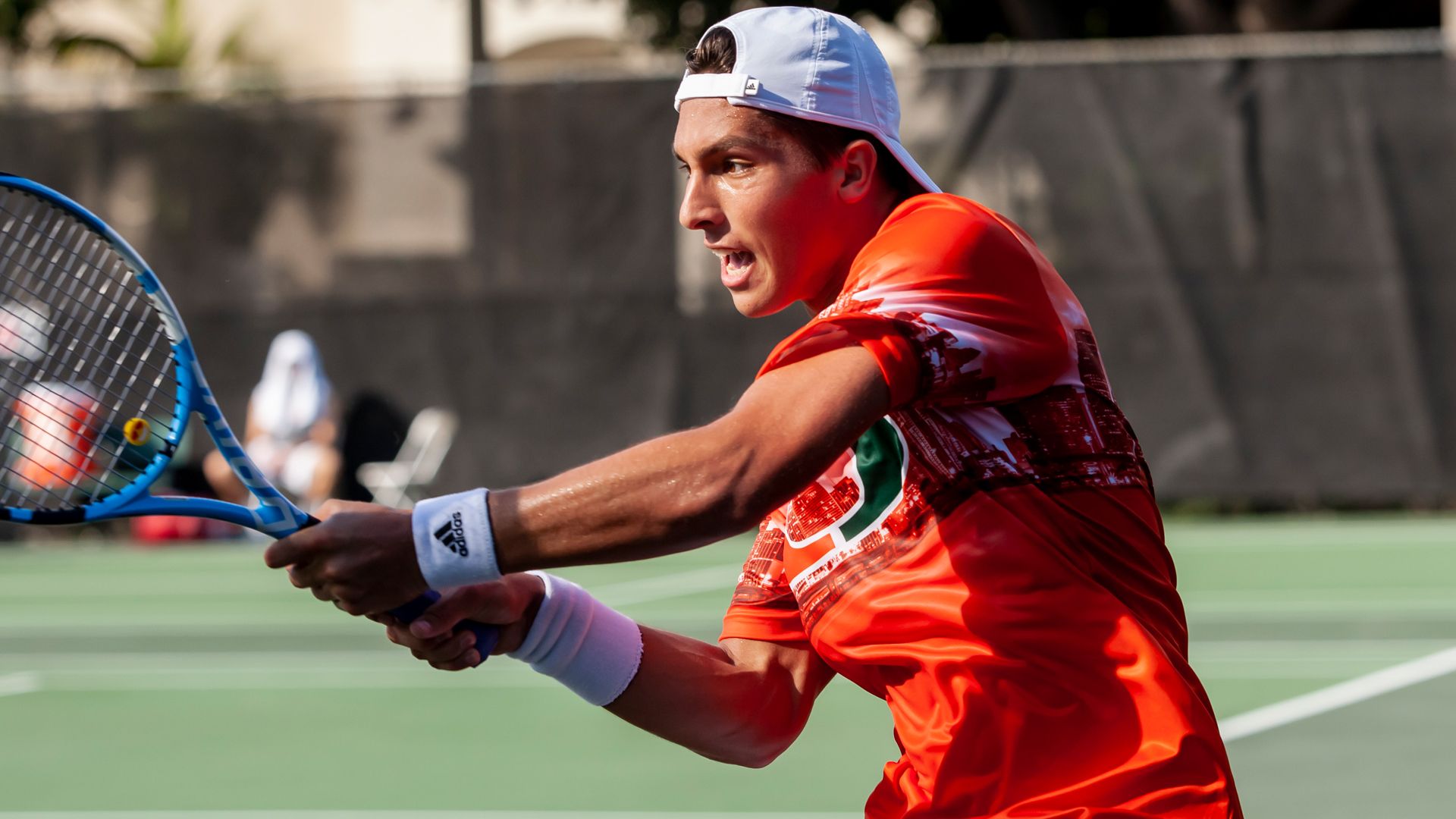 IOWA CITY, Iowa – The University of Miami men’s tennis team improved to 6-2 on the season following a hard-fought road triumph over Iowa, 4-1, Friday night at the Hawkeye Tennis and Recreation Complex.

With the win, the Hurricanes improve to 2-0 all-time against the Hawkeyes (5-1).

“That was a very good college match,” head coach Aljosa Piric said. “It is always tough to play away from home, especially playing indoors. We came here a couple days in advance to prepare and our guys really competed well today. They embraced the adversity, they embraced the conditions that we are not really used to. They just did what they could do, as far as competing really, really well. I am really proud of the fight, and very proud of doubles.”

Miami got the day off in the right direction, claiming the advantageous doubles point to help carry momentum into singles action.

Competing at No. 2 doubles, redshirt junior Dane Dunlap and junior Stephen Madonia fell against Will Davies and Oliver Okonkwo, 3-6.

At the top doubles position, sophomores Adria Soriano Barrera and Tatsuki Shimamoto teamed up for the first time this year and earned a 6-4 victory over Kareem Allaf and Jonas Larsen. It marked the first loss of the season for the Iowa tandem, which had entered the match a perfect 5-0.

Moments later, Francisco Bastias and Franco Aubone topped Piotr Smietana and Joe Tyler, 6-3, as Miami became the first team this season to enter singles with a 1-0 lead over the Hawkeyes.

“We came out with a lot of energy [in doubles] and really took it to Iowa. Tatsuki and Adri played really well at 1,” Piric said. “Tatsuki came up big for us there and a couple freshman at 3 really stepped up and played well to earn us the doubles point. And that gave us momentum heading into singles.”

Competing at No. 5 singles, sophomore William Grattan-Smith fought through a pair of tiebreakers to secure his fourth straight-set victory of the spring to improve to 4-0 in singles action. In a battle with Davies, the duo continued to exchange points in the opening set, before the Atlanta, Ga., native claimed the tiebreaker 7-6 (7-2). In the second set, the sophomore was able to triple Miami’s lead with a 7-6 (7-2), 7-6 (7-4) triumph.

At the top singles position, No. 13 Soriano Barrera dropped the opening set, 4-6, against No. 89 Allaf. However the sophomore regrouped in the second and third sets to secure the match, 4-6, 7-5, 6-3.

Battling Smietana on court 6, Aubone claimed 11 of the opening 14 games to take a commanding, 6-3, 5-0, lead. However, the Hawkeye battled back and won the final seven games to force a third-set tiebreaker. In the third, Aubone rebounded and for the third time this season clinched the match for Miami, topping Smietana, 6-3, 5-7, 7-5.

The remaining two matches remained unfinished, with sophomore Bojan Jankulovski, ranked No. 58 on the Oracle/ITA singles list, holding a slight advantage over Tyler, 5-7, 6-4, 4-3.

“[In singles], we fell behind in a few sets, but as I said, we competed really well,” Piric said. “We competed as a team and when you do that you give yourself an opportunity against anybody in college tennis. So, happy with the win and we are going to recover tonight and get ready to play a tough Utah team tomorrow.”

The Hurricanes will return to Iowa’s indoor complex on Saturday when they face Utah at noon ET. Live streaming and stats for the match will be accessible HERE.

Following Saturday’s match, the Canes will take a week off before returning to the Neil Schiff Tennis Center on Feb. 22 to open ACC action against Georgia Tech at 2 p.m. Two days later, the Hurricanes will host Clemson at 10 a.m.