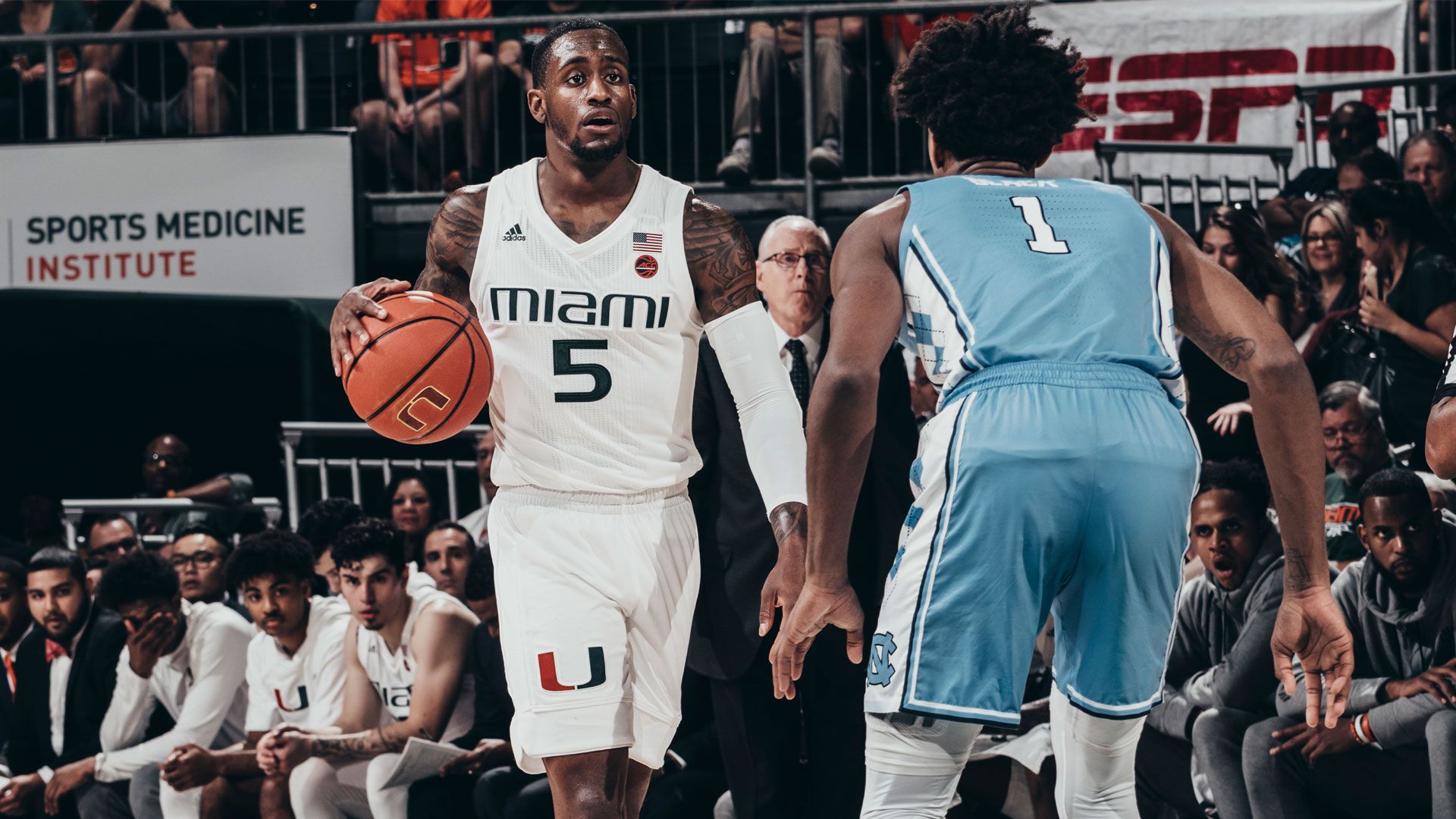 CORAL GABLES, Fla. – Chris Lykes posted a team-high 20 points, his seventh 20-point outing of the season, and six assists, however it was not enough as the University of Miami men’s basketball team (9-8, 1-4 ACC) fell to No. 13/15 North Carolina, 85-76, Saturday afternoon at the Watsco Center.

Lawrence opened the day firing on all cylinders, posting 11 of the Miami’s first 13 points, including a personal 10-2 run to give Miami a 13-10 edge in the opening 5:17 of action. Taking over from beyond the arc, Lykes wrapped up the opening stanza with 13 points, while connecting on all three of his attempts from long range.

At the break, Miami shot 7-of-14 from the 3-point line, compared to the Tar Heels who shot just 4-of-10 from three, as the pair of team’s entered the locker room locked at 37-apiece.

Following a 6-0 run midway through the second period, sparked by back-to-back finishes at the basket by Izundu, the Hurricanes pulled within one, 63-62, with 6:59 remaining in the contest. However, the Tar Heels followed suit with a 12-5 run of their own, converting on 4-of-5 long range shots over the stretch, to take a lead they would not look back on.

Miami returns to action with a trip to Syracuse, N.Y., as the Hurricanes are set to battle the Orange Thursday at 8 p.m. at the Carrier Dome. The game will be broadcast live by Raycom Sports and online via ACC Network Extra.

Game Notes
• Miami is 7-3 at home this season and has won 45 of its last 53 games at the Watsco Center.
• Miami is 0-3 against ranked teams this season.
• Miami has led in the second half in 16 of its 17 games this season.
• The Canes shot 57.7 percent (15-26) in the second half, their best performance in one half in ACC play this season.
• UNC shot 55 percent from the field, the second-best performance against UM this season.
• Miami dropped to 114-21 under Jim Larrañaga when scoring 70 or more points.
• Anthony Lawrence II scored 11 of Miami’s first 13 points and finished with 18 points.
• Chris Lykes scored 20 points and has hit for at least 20 points in each of his ACC games at home this season. He is averaging 24.3 ppg and 54.7 percent shooting from the field in ACC home games this season
• Lykes is averaging 21.6 ppg and shooting 51.5 percent from the field in five conference games this season.
• Lykes has scored 44 points (14.7 ppg) in three career games vs. UNC.
• Lykes recorded six assists, which is one off his career high.
• Zach Johnson scored 17 points and has scored 1,575 career points (1,344 at Florida Gulf Coast, 231 at Miami).
• DJ Vasiljevic went 1-for-2 from 3-point range, connecting from long range for the 30th straight game, which is the longest current streak in the ACC.
• It is tied fourth-longest streak of games with a 3-pointer in program history. He matches Jack McClinton, who hit a 3-pointer in 30 straight games from 2007-08.

Postgame Quotes
Miami Head Coach Jim Larranaga
Opening statement…
“Did they miss a shot in the second half? I don’t recall. I don’t remember if they did… oh yeah, they did, and then they got the offensive rebound. I thought that was a terrific performance by North Carolina and a valiant effort by our guys. I thought that it was a very entertaining game, both teams I thought played very hard and very well. But Cam Johnson was just incredible in the second half. We played man-to-man, we played a 3-2 zone, a 2-3 zone, we even played a box-and-1 for a few possessions and put Chris Lykes on him. But there was no way to stop him or the Tar Heels today. And that’s the way they play, they scored 85 points, and that is basically what they average. I thought our guys did a good job and we missed some critical, what I would call, routine shots for us in the first half that could have given us a lead. But we missed them, and were never able to get a lead on them.”

On having seven players versus UNC’s 11 players, and the factor it played…
“That’s always going to be a factor. We went one stage, I took Chris Lykes out after three minutes, I put him back in after he has rested two or three minutes and then he never comes out again. I don’t know how many minutes they have him playing today, but it has to be more than 35. It’s hard, he is a very necessary part of our offense. When he is not in the game, we do not have enough fire power. And then, he and Zach Johnson, they share that ball handling responsibility and that wears you down. When it got to the last, I’ll say, eight to 10 minutes, I thought Carolina was rolling and we were drained.”

On North Carolina going on a stretch of knocking down 4-of-5 threes, and a 12-5 run overall…
“Yeah, but some of them were beyond the hash mark. Cameron Johnson, on that one he hit over Chris Lykes, I turned to my bench and said, ‘Wow, that was nasty.’ Because, you don’t expect to have to guard a guy who is 6-9, now, he is their leading scorer and a tremendous 3-point shooter, but he was like beyond NBA range. He was closer to mid court than he was to the foul line.”

On the team’s tempo during the second half…
“What happens in basketball and the way you control the tempo is really with your offense. If you can keep the other team on defense, it takes away possessions. What happens when you play North Carolina, they are a high octane offense. So they are scoring so quickly, you get the ball back, they’re pressuring you and trying to force you to play fast. So, there’s a lot of possessions and a lot of scoring. We had 37 points at the half. I was pleased with that. We’re averaging 75. Well, if we could have sustained that in the second half, we would have had a chance to win. But, they just scored, so quickly, so often and from so many different ways. You’ve got Luke Maye who’s the [ACC] Preseason Player of the Year, you got Cam Johnson who’s  6-9 and shooting threes, you have Nassir Little who’s coming in off the bench who’s projected to be a top-10 pick in the NBA draft, you got Kobe White who’s a 6-6 point guard who is going after our guy who is 5-7 and Kenny Williams, he’s like maybe a third, fourth, or fifth option and he is like a NBA guy. So, they’re hard to beat.”

Sophomore Guard Chris Lykes
On North Carolina’s stretch of threes in the second half…
“I think they are good players. They’ve got the ability to shoot, so they hit them.”

On the tale of two halves and what UNC defensively in second half …
“I think they executed their game plan well, just tried to make things tough for me, for everybody on our team. So, I think that was it.”

On being down by two with five minutes to go, the team’s mentality…
“I think just the mentality the whole game we had was we know we can beat these guys. So just we get it that close and for them to keep hitting tough shots, it sucks, but I think we fought hard and we did a pretty good job.”

On the physical wear and tear of playing with seven guys…
“To be honest, I think we did a good job. It’s tough, everybody knows that, but I think we will find a way to fight through it. That’s all I can say, hopefully we will.”

Senior Guard Anthony Lawrence II
On physical wear and tear…
“It’s always tough for me because, playing at the 4, they try to attack me and get me out of the game, get (Ebuka Izundu) out of the game, because we’re short-handed. That’s the game plan, so we have to game plan not to foul, so it’s always tough. Going down the stretch, with the minutes that we’re playing, it’s tough too, but we just have to keep playing and not think about it. Just keep playing the game because we’re always playing to win, so we can’t think about that stuff. We’re trying to get a win.”

On anything else they can do to take care of their bodies…
“We don’t even think about that either. Me, I’m trying to get into the gym more because I’ve got to play a lot of minutes and we have to step up. We just try to play like we have 13 (players).”

On his quick start to the game…
“I’m setting a pick for Chris, and he’s our leading scorer and they have to take him away, so when I was popping, I was open and I got a couple of shots, and that’s when he started getting a couple of shots as well, when they started helping off me. That definitely was a big impact.”

North Carolina Head Coach Roy Williams
Opening statement…
“Everything looks better when it’s going in the basket. I thought we were tougher mentally in the second half than we were in the first half. They made eight threes in the first… They were 7-for-14 at halftime and only made two in the second half. We did a little better job getting out there, but the one thing they did was drive the ball to the basket on us every time. For us, I liked the way we took care of the basketball in the second half but yet we had six turnovers. We’ve got to cut down on our turnovers.”

On the limiting the Canes’ three pointers…
“I think we got to them better. We did choose a few things but that makes it sound like the coaches. It was the kids that did it. We started switching the screens on the ball and that gave us a little more help trying to get to the shooter, too.”

On Miami being limited with players…
“I think it’s a factor. There’s no question. The last game we played against Notre Dame, we had a nice little run in the second half and they only had six players. We had some guys play major minutes. It’s really hard for Jim and his staff right now with only seven guys. I don’t know how you practice.”

On covering Chris Lykes…
“Speed and quickness. I mean, my gosh and he can shoot from the outside, drive the ball to the basket. He’s a complete player. He ended up with (20). Anthony [Lawrence] was big for them, too. 3-for-4 from the 3-point line. He was a bad match up for us as well when we had two big guys in there. Chris is just so quick and clever with the ball. He’s hard to keep in front of you and yet, look there and he played 36 minutes. Zach [Johnson] played 35 minutes. They got major minutes for those guys.”