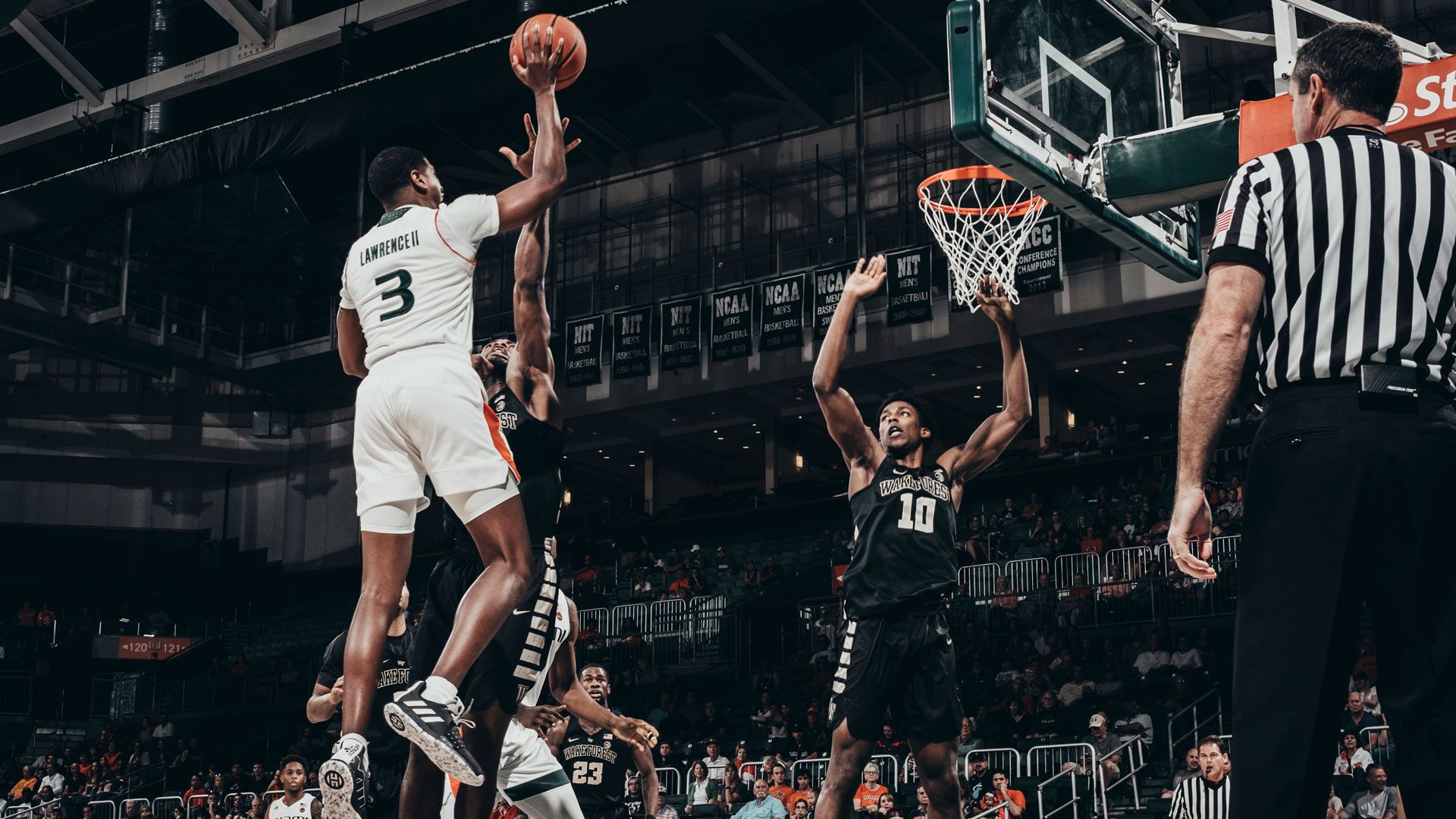 CORAL GABLES, Fla. – The University of Miami men’s basketball team used a stout defensive effort in the second half to blow by the Wake Forest Demon Deacons, 76-65, Saturday afternoon at the Watsco Center.

The Canes (9-7, 1-3 ACC) were led by sophomore guard Chris Lykes, who tallied his sixth 20-point outing of the season, while converting on all 14 of his free-throw attempts. Lykes finished the afternoon with a game-high 25 points, while also dishing out four assists. Lykes’ 14-for-14 effort at the line was the second-best performance in program history, topped only by Jack McClinton’s 16-for-16 day against NC State on March 7, 2009.

With Miami trailing at the break, 33-32, redshirt senior guard Zach Johnson drilled a 3-pointer with 18:10 remaining in the contest to give UM a 38-35 advantage, a lead the Canes would not look back on for the remainder of the game.

Leading by seven, 60-53, with under six minutes to play, Lykes took over the game, converting on all 12 of his free throw attempts in the final 5:06 of action, as the Hurricanes extended their lead to as high as 19, 74-55, with 2:22 remaining in the contest.

Miami returns to action following a week off, as the Hurricanes are set to welcome No. 12 North Carolina to the Watsco Center at noon on Saturday. The game will be broadcast live on ESPN or ESPN2.

Game Notes
• Miami now has led in the second half in 15 of 16 games this season (Penn is the lone exception).
• Miami is now 3-3 this season when trailing at the half.
• UM held Wake’s leading scorer Brandon Childress to a season-low 11 points. He went without a field goal until there was 2:11 left in the game.
• With 11 points and 11 rebounds, Ebuka Izundu recorded his seventh career double-double, including his sixth this season.
• DJ Vasiljevic hit four 3-pointers and has connected on at least one shot from long range in 29 straight games, the longest current streak among ACC players.
• It also is the fifth-longest streak in program history.
• Zach Johnson scored eight points and has scored 1,558 career points (1,344 at Florida Gulf Coast, 214 at Miami).
• Chris Lykes scored in double figures for the 15th time in 16 games and hit for 20 or more points for the sixth time this season.
• Lykes hit a career-high 14 free throws in 14 attempts and has hit 20 straight free throws, dating to the FSU game.
• Lykes’ 14-for-14 day is the second-best free-throw shooting performance in program history. Jack McClinton was 16-for-16 against NC State on March 7, 2009.
• Anthony Mack made his third career start and set a career high with nine points in 27 minutes.
• Mack attempted his first career free throws in the first half, hitting one of two.

Postgame Quotes
Miami Head Coach Jim Larrañaga
Opening statement:
“Coming into the game we had set some very specific goals for our team and we were able to achieve some of them and I think that made all the difference in the world. We have a great deal of respect for Danny Manning and his team and their ability to score the ball. They are averaging like 80 points a game. They have a lot of different ways to hurt you and one of the main ways is they get to the foul line a lot. We don’t have a very deep team and foul trouble is an issue so we knew if we foul them we wouldn’t even have a team. So we tried to do everything we could in both halves to keep our players out of foul trouble. The second thing was to keep them off the offensive boards.”

On the energy within the seven players:
“I think it was because we didn’t play much defense in the first half (laughing). We started the game and we weren’t going to stop when they had 10 points in like a minute. We changed to a zone which really helped us because it kept us out of foul trouble and gave them opportunities to shoot some threes and they happened to miss those. That’s the beauty of basketball. I always laugh when someone says something about how you played. It’s based on whether the guy makes the shot or misses the shot.”

Thoughts on Chris Lykes:
“Yeah, I like him. He’s crazy, but he’s also crazy good. You never know what to expect. He might come down and not make a single pass but then launch a 30 footer. Then the next time he may come down, drive into the lane, throw it around the back pass and throw it into the stands. Then the next time he buries that same shot and then the around the back pass leads to a dunk. He is what he is. He’s an aggressive, attacking guard who can shoot and score in a lot of different ways. What we have asked him to do, and I hope he gets to this point, where he realizes that he can have the same impact on the defensive end of the floor. He has that unique talent but he only shows it once in a while. When you’re really good, you show that all the time.”

On how tired the team is:
“These travel games, I told you earlier, when we started out, we were okay. Played on a Friday, played on a Tuesday, played on a Saturday. It was a routine. We went out to California we had a long flight, then play three games in four days, then fly back and play a game as soon as we get back, play Rutgers in the ACC-Big Ten Challenge. There is no time to prepare and rest and recover.”

Sophomore Guard Chris Lykes
On feeling relieved and winning the game:
“It definitely feels good. I don’t think anyone likes losing, so it definitely good to get one under our belt. And now it is time to build on this.”

On feeling confident in finishing strong:
“I think the guys felt pretty well rested. Guys were so energetic. In some of the earlier games we had leads but would still be a little bit tired and that is how the teams would come back on us. And that is why we did a good job controlling the pace.”

On making all his free throws:
“They were just fouling. And they were already in the penalty. I have been doing this free throw routine with Coach L before games and it has really helped me to focus.”

Junior Guard DJ Vasiljevic
On what worked today:
“Listen to Coach L, listen to his strategy, and what he has in place, and we executed that. We had a few turnovers here and there. But that happens, that is basketball. But just listening to him and taking care of the business.”

On strategy of Coach L and Wake Forest:
“Wake Forest is a driving team. They attack. They get to the free throw line a lot. And like everybody knows, we have seven guys and with a team like that we have to stay out of foul trouble. We tried to control the pace the entire game. Wake Forest likes to get up and down and score a lot of points so I think we did a good job on that today. “

On pulling away with 18 minutes left…
“I think we just took their shots, made the right decisions. Defensively, I think we were really good today, especially with rebounding. They’re a good offensive rebounding team. So I think we did a good job boxing out and just doing the little things that we had to do in order to win the game. “

Wake Forest Head Coach Danny Manning
Opening statement:
“First half of the ball game. I thought we came out and we did some things fairly well. Obviously second half was completely different ball game. We didn’t find enough resistance. We weren’t able to defend them the way we need to. We knew going in to the ball game that they would shoot threes. They averaged 25 threes attempts per game. They had that covered today and for us they made far too many. They are one of the better shooting teams that we have come across this year.”

On guarding Chris Lykes:
“He is a talented player. He has a great feel and he has been blessed with unbelievable burst and changes. He is a good player and he is exceptionally fast. You can’t mimic what he is in practice with our scout team.

On Brandon Childress being cold today:
“It is just one of those games when shots just don’t go in, and that happens. I thought he took some shots that he was pressing a little bit, but he had seven assists and two turnovers so that’s good, and he had four steals. So he did some good things for us, but we just need him to do a little bit more. When he has a shooting night like he had tonight, we have to pick it up in certain areas and we weren’t able to do that tonight.”

On a missed opportunity to win the game:
“When you have a game and you lose, it is a lost opportunity. It doesn’t matter who you play. As a competitor you want to win. That is the name of the game. So it doesn’t matter how many guys you have and that is no disrespect to any team that you play. But you play to put yourself in situations where you can be successful.”

On performance of Chaundee Brown:
“He came out and really gave us some life. I think he was in double figures at halftime. He did some good things in terms of getting the ball down on the floor and getting to the paint. I think for us, even Chaundee, a couple times he lifted a couple guys up in the air for shot fakes. He needs to draw more contact to get to that free throw line in those situations. But I think 22 points was certainly a good evening in terms of scoring the ball, but we still needed a little bit more.”