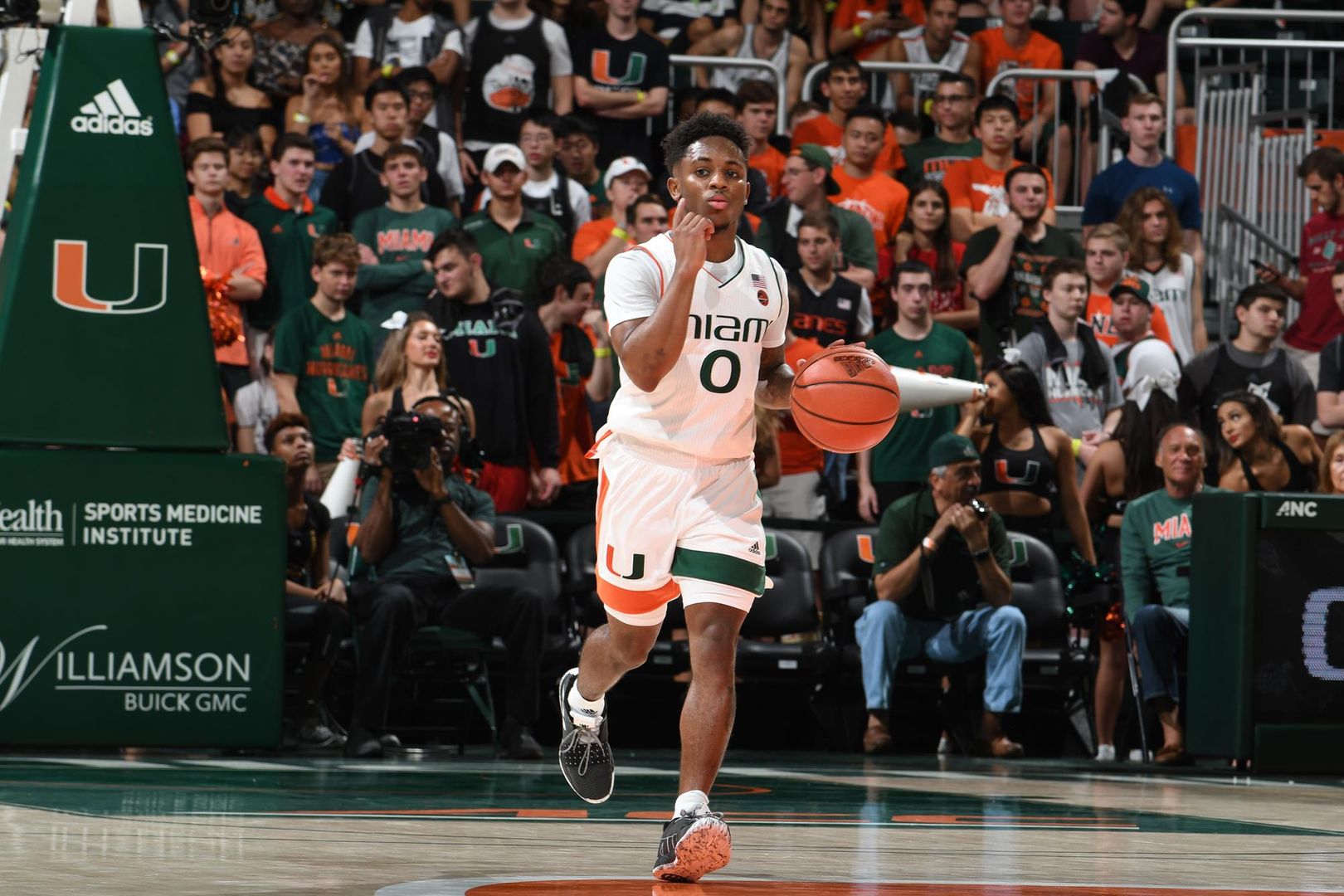 CORAL GABLES, Fla. – Off of a pair of 20-point performances from guards Chris Lykes (21) and Dejan Vasiljevic (20), the University of Miami men’s basketball team (3-0) pushed past Bethune-Cookman (2-3), 78-70, Saturday afternoon at the Watsco Center.

With a team-high 21 points, Lykes has now registered 20-plus points in his first three games to kick off his sophomore campaign, becoming the first UM player in 29 years (Joe Wylie) to accomplish the feat.

Miami shot 40 percent from the field. After being held to shoot a season-low 28.6-percent (10-of-35) from the field in the opening frame, Miami rebounded in the second half hitting on 16-of-30 (53.3-percent) shots. UM connected on 8-of-26 from 3-point range and was 18-for-24 from the charity stripe. BCU shot 45 percent for the game, but was limited to 39 percent shooting in the second half.

Capping a strong opening 2:09 of action, Vasiljevic drained a shot from beyond the arc to place the Canes in front 7-4. However, BCU’s Mark Gordon answered with a 3-pointer of his own, before Maitland finished a put-back jumper to give the Wildcats their first lead of the game, 9-7.

Following a put-back lay-up by Lawrence at the 12:40 mark that put the Canes up 13-11, the Bethune-Cookman defense held the Hurricanes to zero made shots from the field over the next 8:07. Lawrence ended the drought with a ferocious dunk to pull Miami back within five, 25-20.

Trailing by seven with 1:03 remaining in the opening half, Vasiljevic was sent to the charity stripe where he was able to bury both attempts. On the ensuing possession, redshirt senior guard Zach Johnson hit one of two shots from the free-throw line with 34 seconds remaining in the half

After a strong defensive stand by the Canes, Vasiljevic collected the rebound before making a run in transition. Pulling up from behind the arc with time expiring, the Melbourne, Australia, native drilled the shot to cut the halftime deficit to one, 31-30, as Miami closed out the frame on a 6-0 run.

Out of the break, Lykes buried an open 3-pointer off of a pass from redshirt sophomore forward Sam Waardenburg, as the Hurricanes took their first lead since 12:40 remained in the opening half.

Trailing 58-57 with 5:48 to play in the game, Vasiljevic fought hard at the rim to prevent a BCU offensive rebound and was able to tip the ball out to Lykes. Taking advantage of the open space up the court, the Mitchellville, Md., native finished strong at the basket for an and-1 opportunity. The sophomore buried the free throw to place the Canes back-in-front 60-58.

On the Canes’ ensuing offensive possession, Lawrence was unable to connect from beyond the arc, however Vasiljevic was in position to pull down the offensive rebound. Vasiljevic found an open Lykes at the top of the key, and the sophomore drilled the 3-pointer to place the Canes in front 63-60.

After Maitland knocked down a pair of free-throws to tie the game at 67-apiece, Lykes countered with a pair of shots from the charity stripe, before Lawrence knocked down his only 3-pointer of the night to place the Canes in front by five.

Maitland, who finished the afternoon with a game-high 29 points, knocked down his fifth three of the contest, before Lykes and Vasiljevic knocked down a pair of clutch shots from long distance to officially put the game out of reach, 78-70.

The Hurricanes will return to the hardwood on Thanksgiving Day, as Miami is set to compete in the opening round of the Wooden Legacy against La Salle in Fullerton, Calif., at 2:30 p.m. ET. The game will be broadcast live on ESPNU.

Game Notes
• Miami now leads the series with Bethune-Cookman, 6-0.
• UM extended its non-conference win streak to 19 games.
• With a team-high 21 points, Lykes has now registered 20-plus points in his first three games to kick off his sophomore campaign, becoming the first UM player in 29 years (Joe Wylie) to accomplish the feat.
• Lykes is the first UM player to record three straight 20-point efforts since Shane Larkin put up 20 or more points in consecutive games against Boston College, NC State and North Carolina in the 2013 ACC Tournament.
• Miami shot 28.6 percent from the field in the first half, its lowest shooting percentage in a half since hitting on 21.4 percent of its attempts in the first half against Virginia on Feb. 13, 2018.
• Junior forward Dewan Hernandez was withheld from competition for the third straight game as the University and the NCAA review his eligibility.