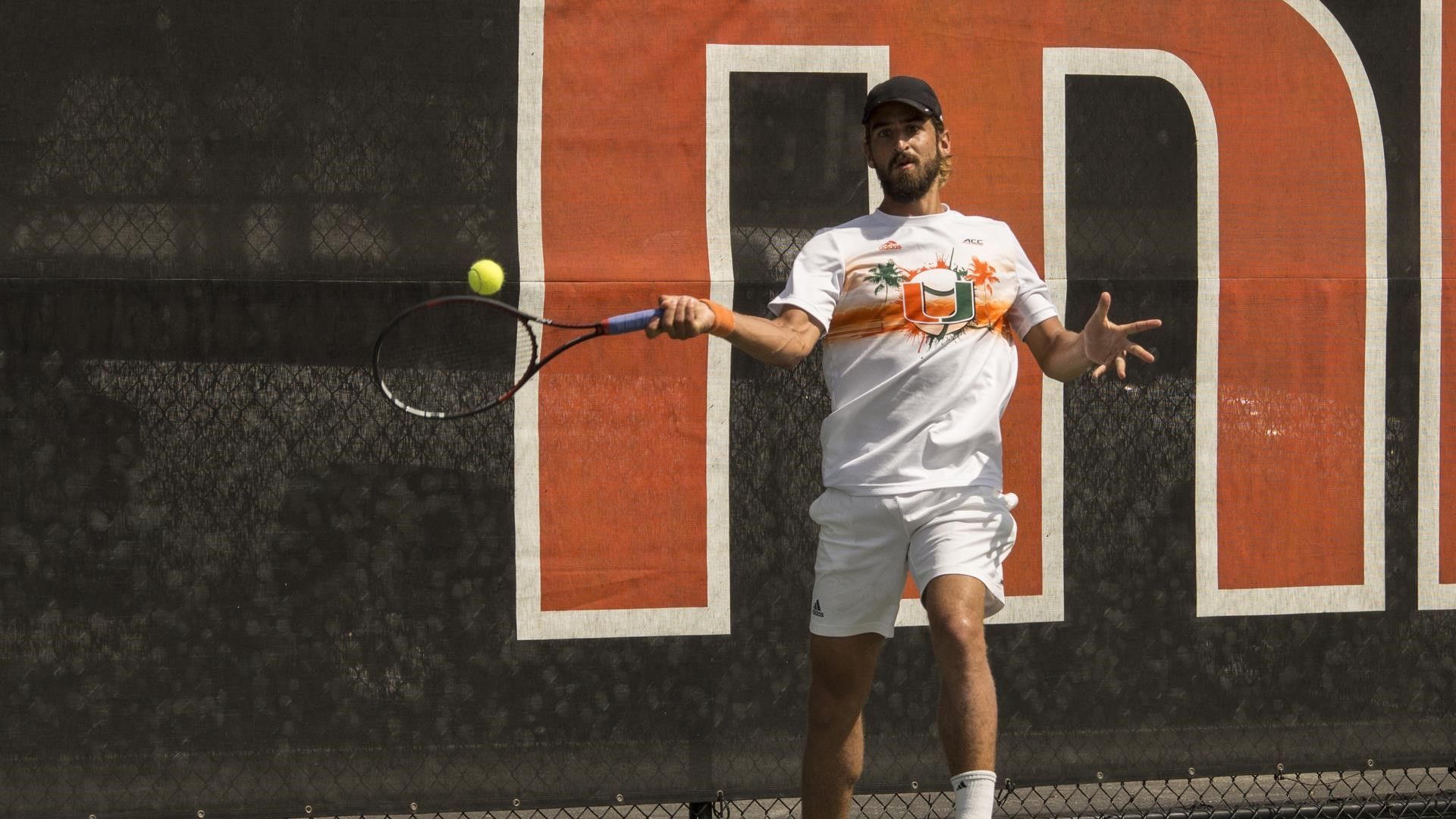 CORAL GABLES, Fla. – The University of Miami men’s tennis team closed out its regular-season road stretch with a narrow defeat to Boston College, 4-3, at the Flynn Recreation Complex Sunday afternoon.

The Hurricanes (12-10, 3-9 ACC) grabbed the early lead after triumphing in doubles play, but singles victories at the top three spots propelled the Eagles (8-11, 1-9 ACC) to their second victory in the all-time series – Miami leads 12-2 – and first conference victory in 2018. For the Canes, this was the fifth 4-3 defeat of the season.

“We did not compete the way we expect our players to compete and we did not deserve to win,” Miami head coach Aljosa Piric said. “Credit to Boston College. We have been successful this year when we decided to put everything on the line for one another.”

The day started well for the Hurricanes, as No. 18 duo Christian Langmo and Adria Soriano cruised to a 6-2 win against BC’s Derek Austin and Sean Mullins at the top of the doubles lineup.

Despite Eagles Max Palmer and Chris Grasel prevailing over redshirt sophomore Dane Dunlap and freshman Bojan Jankulovski, 6-4, Miami clinched the doubles point via senior Nile Clark and freshman Pablo Aycart. The two demonstrated strong composure in a tiebreaker at the No. 3 spot for a 7-6 triumph over Conor Mullins and Kent Mukai.

Jankulovski earned his second straight-set singles victory of the weekend, taking down Mukai 6-2, 6-4, in the No. 4 matchup. The freshman continued to lead the Canes in singles play, improving to 17-5 this spring.

One spot below him, senior Niclas Genovese earned yet another comeback victory, which came in a thrilling fashion. After splitting the first two sets with Palmer, Genovese won a 10-point tiebreaker that featured 30 points for the final 4-6, 6-2, 16-14 scoreline. Two of Genovese’s three ACC victories in singles action have come after the Zug, Switzerland, native dropped the opening set.

At the No. 3 position Dunlap, who won a three-setter himself at Notre Dame Friday, had a chance to close out Markus Norby in straight sets, but the BC representative won the second-set tiebreaker to stay in the match and edged Dunlap in the final set for a 6-7, 7-6, 6-4 victory.

Clark’s ACC singles debut this season was spoiled by Sean Mullins, 6-2, 6-2, at the bottom of the lineup.

In addition, the Eagles’ top two singles players, Austin and Grasel, each recorded a victory against a ranked Miami opponent to help their team to the win. Austin bested No. 118 Langmo, 6-2, 6-4, while Grasel notched a straight-set win against No. 97 Soriano, 7-5, 6-2.

“We have last three regular-season matches at home next week and I expect all our guys to bounce back, accept and embrace adversity and fight the way I know we can,” Piric said.

The Canes’ final week of regular-season action begins Friday at 3 p.m., against No. 20 Duke at the Neil Schiff Tennis Center. On Sunday, Miami hosts No. 8 North Carolina at noon and Dayton at 5 p.m., for a Senior Day doubleheader.