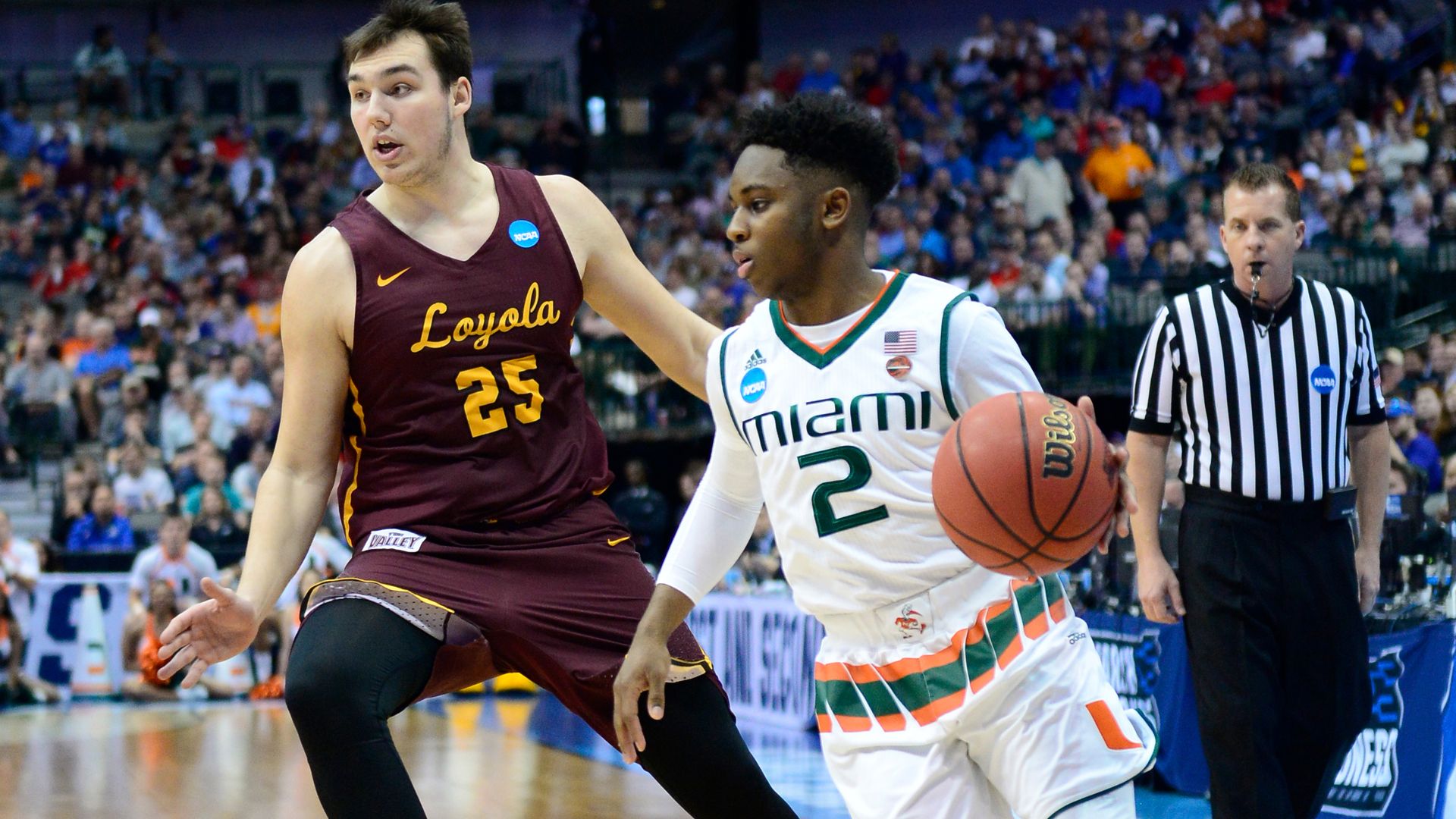 DALLAS, Texas – March Madness is famous for buzzer beaters. You just never want to find yourself on the other end of the highlight.

The sixth-seeded Miami Hurricanes found that out the hard way Thursday at American Airlines Center as Loyola Chicago’s Donte Ingram nailed a long three-pointer at the buzzer to lift the 11th-seeded Ramblers to a 64-62 win over UM in the first round of the NCAA Tournament.

It was a cruel ending to a terrific season, which saw the Hurricanes finish 22-10 and advance to the NCAA Tournament for the third consecutive season. Loyola won its 11th straight game and improved to 29-5 on the year.

Miami shot 51 percent, outrebounded Loyola 33-27 and led for most of the second half. But the Hurricanes committed 16 turnovers and eight of the Ramblers’ 26 field goals were treys, the last Ingram’s game winner.

“Well, it’s pretty simple to know why we call it March Madness,” head coach Jim Larrañaga said. “Unbelievable great game, both teams played very hard. We did some very good things and shot the ball over 50 percent, 44 percent from three, outrebounded them. But was one big play after another, and it was a close contest throughout, and they made the last big play. They hit that three that basically won the game for them.”

The game was tied at 28 at halftime and Miami jumped out to a seven-point lead in the second half. But the Ramblers kept chipping away. Their only lead of the second half was the one that provided the final margin.

Miami was clinging to a three-point lead when Ramblers guard Clayton Custer hit a trey from the corner to tie the game at 60 with a minute left. Newton then hit a tough fall-away jumper with 40 seconds left to put the Hurricanes back up by two.

Loyola’s Marques Townes was fouled driving the lane on the ensuing possession but missed the first free throw. He made the second and Miami led 62-61 with 26 seconds left. Newton inbounded the ball to Walker, who then lost it out of bounds. Loyola had the ball back with a chance to hold for the last shot.

Townes drive the lane again and missed, and forward Sam Waardenburg grabbed the rebound. He fed Walker, who was fouled with 9.3 seconds left. But he missed the front end of the one-and-one opportunity and Loyola sprinted upcourt. Ingram received a pass at the top of the key and nailed the game winner with .3 seconds remaining.

“After they made the shot, I mean, it’s definitely a dagger to the heart,” Walker said. “It for surely hurts because your teammates, such as Ja’Quan who’s a senior, you come to the realization it’s your last game with them. It definitely hurts seeing a shot like that go in, but I’m proud of my team and how we fought and how we played. Hats off to them, and hope they do well in the tournament.”

Both teams shot 50 percent or better in the first half and 42 of the teams’ combined 56 points came in the paint. Loyola erased an early 6-4 Miami lead with a 10-1 run, jumpstarted by back-to-back treys from Custer and Ingram. Walker got a friendly roll on a 3-pointer to cut the lead to 16-13. Newton then converted an old-fashioned three-point play to tie the game at 20 with 6:47 left in the half.

The teams went back and forth until halftime with sophomore DJ Vasiljevic snagging an offensive rebound off a Newton miss to tie the game at 28 heading into the break.

The Hurricanes now own an all-time record of 8-10 in the NCAA Tournament, 4-4 under Larrañaga.

“I thought these guys did a great job this year,” Larrañaga said. “When we started the season, we had five freshmen and four sophomores, only one senior. It was a very young group. Just to make it to the Big Dance I thought was a tremendous accomplishment.

“Secondly, we lost perhaps our best player in Bruce Brown midway through the ACC race, which made it even more challenging to finish as high as we did in the ACC and make the Big Dance.”

NCAA Tournament
• Miami made its 10th NCAA Tournament appearance, including its third straight, matching a program record. UM is 8-10 all-time in the tournament.
• Jim Larrañaga is 9-9 in nine career trips to the NCAA Tournament.
• Ebuka Izundu and Anthony Lawrence and Ja’Quan Newton each played in their third NCAA Tournament, joining seven other Hurricanes to see playing time in at least three NCAA Tournaments.
• Lonnie Walker scored 12 points, the most points by a Miami freshman in an NCAA Tournament game. The previous high was 11 by John Salmons against Purdue on March 14, 1999.

Team
• Miami finished with 22 wins, which is tied for 10th most in a season at UM.
• Miami committed 16 turnovers, its most second most of the season (18 at Georgia Tech on Jan. 3).
• The Hurricanes out-rebounded Loyola, 33-27, and lost for just the third time when outrebounding their opponent (13-3 in those games).
• Miami shot 51 percent and finished 14-2 when hitting on at 50 percent or better from the field.