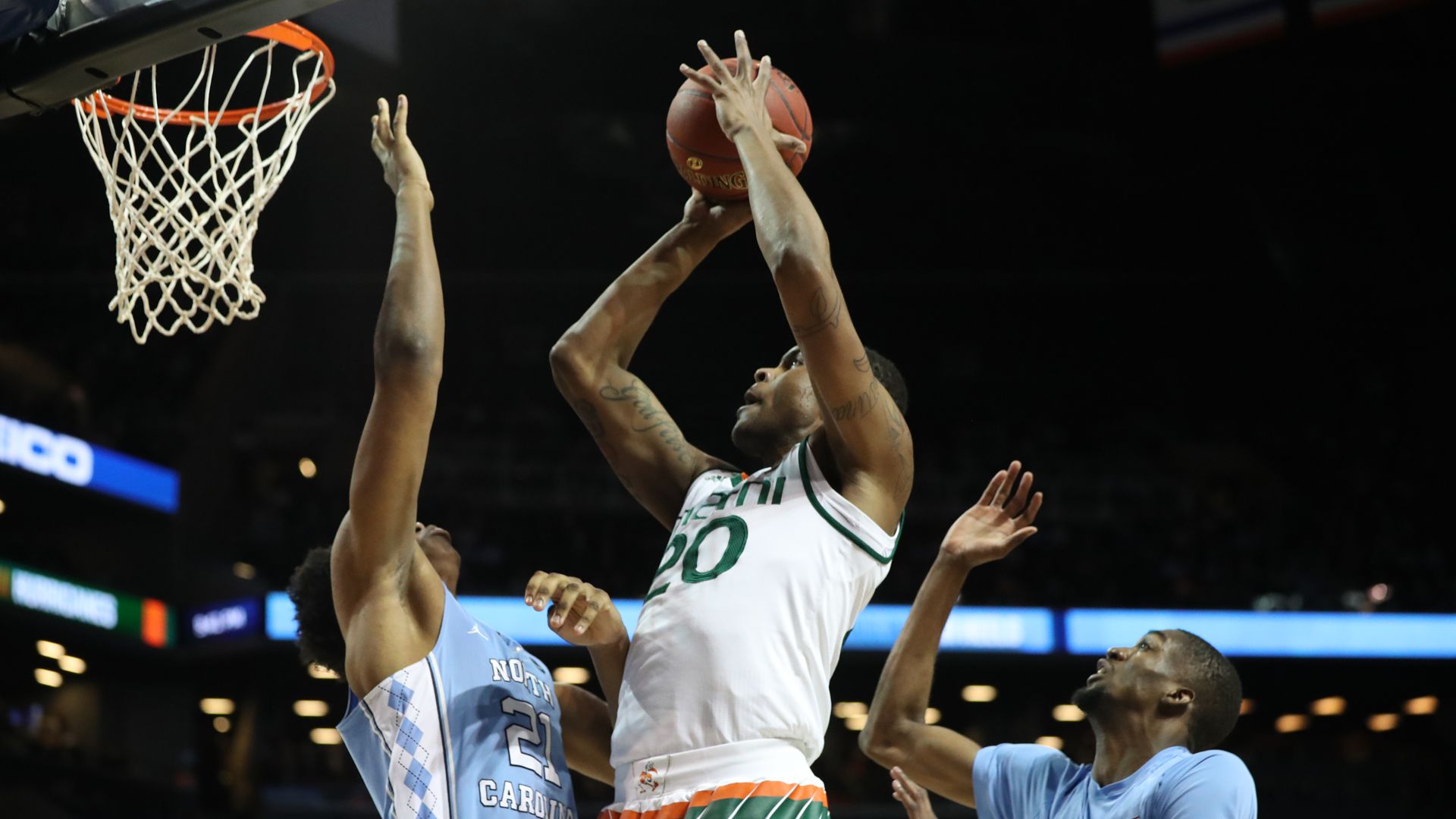 BROOKLYN, N.Y. – For 35 minutes, Miami and North Carolina treated a capacity crowd to a hard-nosed, counterpunching game of basketball between two conference heavyweights, befitting of Brooklyn.

But over the last five minutes of Thursday’s night ACC Tournament quarterfinal, the sixth-seeded Tar Heels turned the contest into a track meet, ending the game on a 16-2 run to pull away for an 82-65 win over the third-seeded Hurricanes before 17,732 at Barclays Center.

“They are a tremendous team in the open court, and we were not able to get back and set our defense enough times throughout the contest to put ourselves in a position to win the game,” head coach Jim Larrañaga said.

Miami held UNC to 41 percent shooting, but the Tar Heels outrebounded the Hurricanes 52-41 and outscored UM 18-7 at the free throw line.

North Carolina led 32-31 at halftime and the biggest lead for either team in the first 10 minutes of the second half was three points. The Tar Heels eventually built the lead to eight but Newton hit a three-pointer from the top of the key to cut it to 66-63 with 4:56 left. The Hurricanes would get no closer. During North Carolina’s decisive late run, Miami missed six consecutive field goal attempts.

“I think what ends up happening is when the game gets very fast, your mind needs to slow down,” Larrañaga said. “You can’t have your mind going fast forward while you’re running at top speed because eventually you’ve got to make a decision, and at the end, we weren’t making good decisions at top speed and they were. They made better plays in the second half in the open court than we did.”

After a frenetic pace in Miami’s 91-88 win in Chapel Hill just nine days ago, both teams started off slowly in Brooklyn, combining to miss their first 12 shots from the field. Freshman guard Chris Lykes finally broke the drought with a layup at the 16:33 mark of the half.

That ignited the Hurricanes, who proceeded to race out to a 14-0 lead, aided by Newton, who made two layups, and sophomore guard DJ Vasiljevic, who hit two treys in succession.

North Carolina misfired on its first 13 shots before guard Seventh Woods finally made a layup and the ensuing free throw at the 12:51 mark. That jumpstarted a 19-4 run by the Tar Heels, who took their first lead of the game at 19-18 when guard Brandon Robinson nailed a 3-pointer from the wing.

Miami looked to take a two-point lead into the locker room, but Tar Heels forward Cameron Johnson was fouled by Walker on a long 3-point attempt with .4 seconds remaining. Johnson made all three free throws to give the Tar Heels the one-point lead heading into the break. UNC led for just 29 seconds of the first half.

The Hurricanes head back home Friday and now await Selection Sunday, where the Hurricanes are expected to earn their fourth NCAA Tournament berth in the last six seasons.

Team
• North Carolina leads the all-time series, 22-8.
• Jim Larrañaga is now 6-6 in his Miami career against North Carolina.
• The 17-point defeat was Miami’s largest margin this season. UM’s previous eight losses all came by 10 points or fewer.
• Miami squandered an early 14-point lead, its largest lead in a loss this season (13 in second half against Duke on Jan. 15).
• Miami shot just 37.1 percent, its fourth lowest shooting percentage of the season.
• Miami is 3-6 this season when trailing at the half.
• Miami committed eight turnovers, one off a season low.

Individual
• Ja’Quan Newton played in his 126th career game, tied for seventh most in program history.
• Newton scored a season-high 17 points and moved up three spots on Miami’s all-time scoring list with1,134 career points. Miami is 12-2 this season when he scores in double figures.
• Newton scored 32 points in two games against UNC this season.
• Newton matched a season high with seven rebounds.
• Newton also hit a pair of 3-pointers; he had five 3-pointers in 30 games in the regular season.
• Anthony Lawrence II scored a dozen points, reaching double figures for the 13th time this season.
• Lawrence matched a career high with three blocked shots.